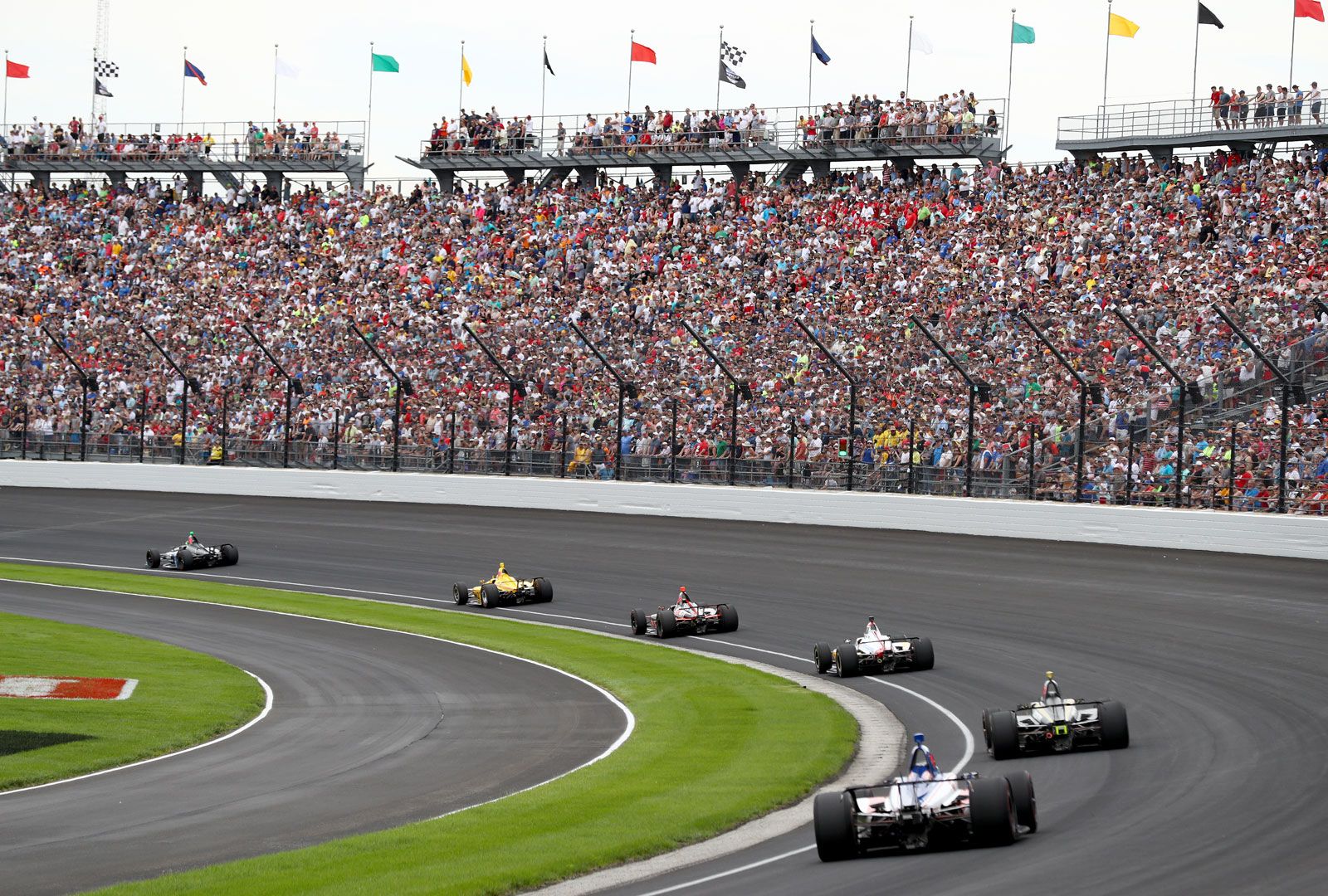 The Indianapolis 500 is the Greatest Spectacle in Racing.

A showcase for achievement and the human pursuit of progress, the Indianapolis 500 is the crown jewel of American motorsports.  It is one of the three most prestigious races in the world and, with the Monaco Grand Prix and 24 Hours of Le Mans, comprises the Triple Crown of Motorsports.  In its never- ending quest for more speed and innovation, the Indy 500 explores the limits of man and machine.  The high-octane race is the marquee event in open wheel racing and is where legends are born.  The 200-lap, 500-mile event is an endurance race where the need for speed is an obsession.  Held in the Indianapolis enclave of Speedway, the race features cars that reach speeds in excess of 220 MPH and average more than 180.

Located on the corner of 16th Street and Georgetown Road – six miles west of downtown – the Indianapolis Motor Speedway has hosted each of the 100 races in Indy history.  Constructed in 1909, the speedway has a permanent seating capacity of 235,000 and can accommodate 165,000 additional spectators in the infield.  The track is a 2.5-mile-long rectangular oval with two 5/8th –mile-long straightaways, four identical quarter-mile turns and two “short chute” straightaways between turns one and two, and three and four.  When IMS opened, William Howard Taft had just succeeded Teddy Roosevelt in the White House, Yale was NCAA football champion, and a Hershey bar cost two pennies.  In the fall of 1909, the original surface of crushed rock and tar – considered too dangerous for race cars – was covered with more than three million paving bricks to make the track safer.  By 1961, the entire track had been paved with asphalt, but a 36-inch strip of the original bricks was kept intact at the start/finish line.  The fabled “Yard of Bricks” remains, and the iconic race track is known as “The Brickyard.”  IMS is enormous.  On its grounds are the IMS Museum, Auto Racing Hall of Fame, and an 18-hole championship golf course.

The inaugural race –dubbed the 500 Mile International Sweepstakes – was held May 30, 1911, when 90,000 spectators filled the Speedway on a cool Tuesday morning.  Ray Harroun won the first race, taking nearly six hours and 45 minutes to pilot his Marmon Wasp and outdueled 39 other starters for the $10,000 prize.  Harroun, who had come out of retirement to drive and re-retired in the winner’s circle following the race, averaged just under 75 miles per hour, the slowest 500 in history.  The fastest came in 2013, when Brazilian Tony Kanaan completed the 200 laps in 2:40.03 at an average speed of 187.433.  In 1912, the purse was increased to $ 50,000 and the field was limited to 33 cars, where it remains.  Early cars were two seaters that included a driver and on-board riding mechanic, but they were abandoned after World War II to reduce weight and improve aerodynamics.

Originally held on Decoration Day [precursor to Memorial Day], which the Grand Army of the Republic established as a time for the nation to decorate the graves of the Union war dead with flowers, the 500 is run on the last Sunday in May, over Memorial Day Weekend.  Indy is the best-attended sporting event in America.  Last year’s race – the 100th running – drew more than 350,000 spectators.  The event was postponed twice during World War I and was not held from 1942 to 1945 due to World War II.  Three drivers have each won a record four Indy titles, including racing legends A.J. Foyt, Rick Mears and Al Unser Sr. Team owner Roger Penske has 16 Indy wins and 17 poles, both records.  Rookies have won the Indy 500 on ten occasions.  The most recent was 2016, when Alexander Rossi took the checkered flag on motorsports’ biggest stage.

In 1936, Louis Meyer became the first three-time winner and was photographed guzzling his favorite drink, chilled buttermilk, after the race.  A milk industry executive saw the photo and arranged to have future winners repeat it.  Today, the American Dairy Association administers the drink, going so far as to ask drivers ahead of time it they prefer their bottle to contain whole, two percent, or skim milk should they end up in the winner’s circle.  Race fans take the tradition quite seriously.  Emerson Fitapaldi – who owned an orange grove – drank orange juice after his victory in 1993 and was widely booed by spectators for years afterward.

Besides the bottle of milk, the Indy winner claims the $ 2.5 million winner’s share, is presented a wreath in Victory Lane, and receives the pace car used during the race.  Indy 500 champions are presented the Borg-Warner Trophy and have their names and likeness permanently sculpted onto its sterling silver base.  The tradition of kissing the bricks was started by NASCAR champion Dale Jarrett, who knelt and kissed the Yard of Bricks following his Brickyard 400 victory in 1996 as a tribute to the storied history of the IMS.  His team quickly joined, and a tradition was born that Indy winners have followed since.

Like the Masters golf tournament, Indy has a tradition unlike any other.  Gates to IMS open at 6:00 am and a series of spine-tingling pre-race ceremonies begin later in the morning.  An invocation is read, followed by the playing of Taps, which is accompanied by a military fly-over.  Since 1927, the Purdue University All-American Marching Band [which includes the world’s largest drum] performs at the start-finish line.  The Boilermakers band backs the singing of America the Beautiful, followed by God Bless America, then The Star Spangled Banner.  Patriotism resonates throughout the Brickyard, and if patrons have not cried by then, they certainly will upon the singing of Back Home Again in Indiana, which has been part of the pre-race ceremony since 1946. From 1972 to 2014, it was performed by Jim Nabors and the song is accompanied by the release of thousands of balloons into the clear blue skies of the Heartland.  The sights and sounds are breathtaking.

Once the track is cleared and drivers are in place, the starting command is given.  In a tradition that dates to 1948, the most famous four words – Gentlemen, start your engines! – are called to signify the start of the race.  In 2016, the command was given by four generations of the Hulman-George family, long-time owners of IMS.  At 12:20 pm ET, the pace car leads the assembled starting grid around the track for a few warm up laps, followed by the waving of the green flag signifying the race’s official start.

Practices and time trials are held during the two weeks leading up to the race.  Since 1920, teams run a four-lap [ten mile] qualifying distance and the 33 fastest cars are locked into a grid.  The fastest qualifier takes the pole position – inside spot of Row One – while the slowest takes the outside space in Row 11.  Teams are allowed three attempts to qualify.  Cars must pass a rigorous technical inspection before being allowed to practice, and another before being permitted to race.  Criteria includes minimum weight, dimensions, approved parts and safety equipment.  Firestone has been involved with Indy since its inception and is the exclusive tire provider for the race.  Chevrolet and Honda are the current engine manufacturers.  All engines are 2.2 L, V6, twin-turbocharged designs, tuned to produce 550 to 700 horsepower.

First aired as part of its Wide World of Sports anthology, ABC began covering the Indianapolis 500 in 1965.  Originally aired in segments, the race has been televised in its entirety since 1986.  It is shown on tape delay in Indianapolis, although the 2016 event was aired live for the first time since 1950 in celebration of its 100th running.