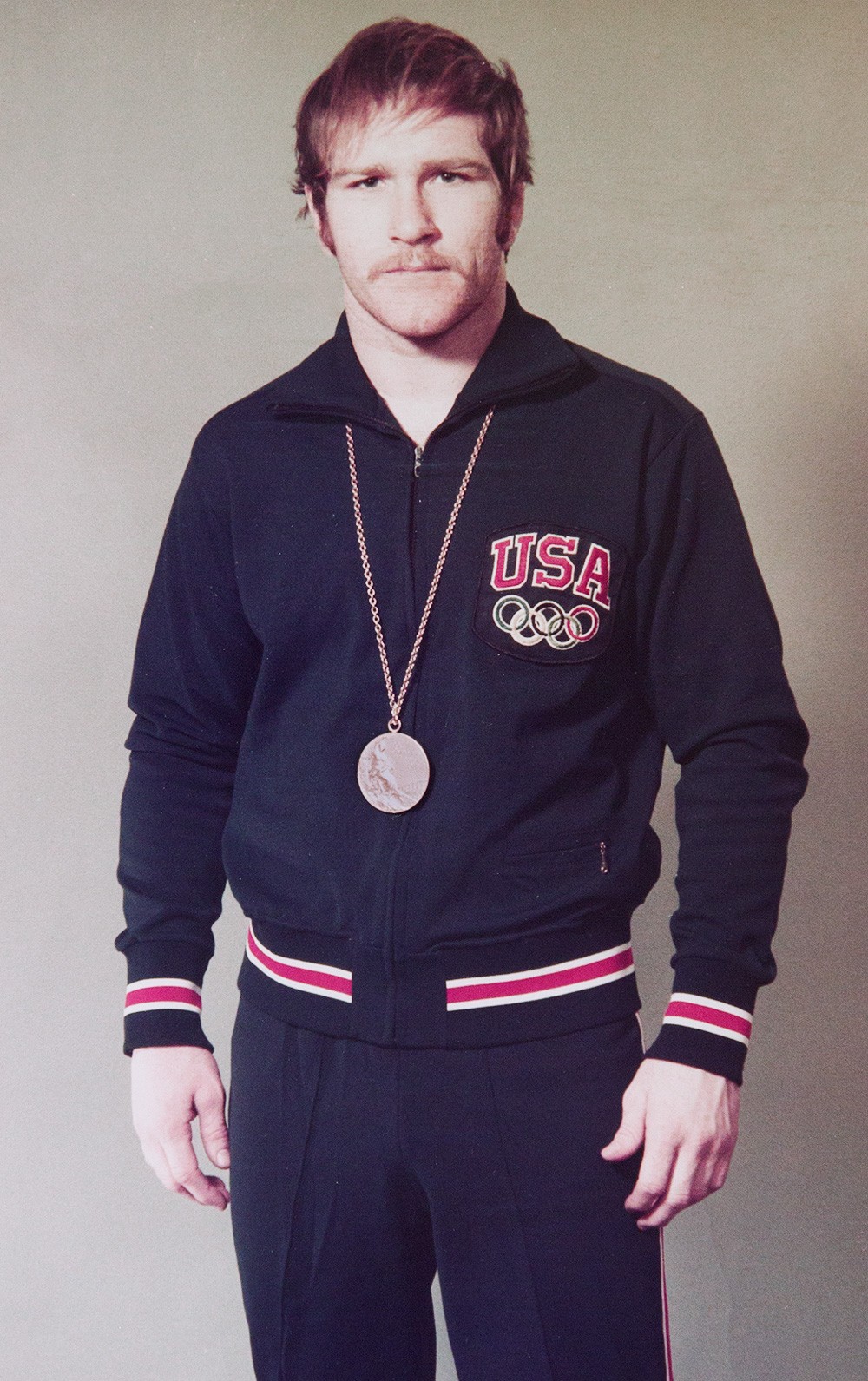 Danny Mack Gable is the greatest and most important figure in the history of freestyle wrestling.

Born on October 25, 1948 in the small industrial town of Waterloo, Iowa, he was a YMCA state champion in swimming, quarterback of his middle school football team, played baseball and ran track. He discovered the sport of wrestling at age 16, around the same time his 19 year old sister was raped and murdered in the family’s living room while Dan and his parents were away on a fishing trip. He used that anger and pain as motivation while competing for Waterloo West High School, where he went 64-0 with 25 pins. As a sophomore, he wrestled at 95 pounds and won the state championship. He moved up in weight as a junior to 103 and again won a state title and, as a senior in 1966, captured a third state crown at 112 pounds. In addition, the Wahawks won the team title in his junior and senior seasons. He later said that losing his sister “made me even more of a horse with blinders on as far as wrestling went”. After high school, Gable enrolled at Iowa State University, located in Ames, about 100 miles from Waterloo. Freshman were not eligible to participate in varsity athletics at that time and he went 17-0 on the freshman team, won the Midlands Tournament and went 3-0 at the U.S. Freestyle Nationals. He made his varsity debut for the Cyclones as a sophomore and went 37-0 in route to winning the Big Eight and NCAA Championships at 130 pounds. In his junior season in 1969, he went 30-0 with 25 consecutive pins, an NCAA record, and was named Most Outstanding Wrestler of the NCAA tournament at 137 pounds while winning individual and team titles. He also won the first of his two consecutive Gorrian Awards for most pins in the least amount of time at the NCAAs and again won the U.S. Freestyle National title. He competed at 142 pounds as a senior and repeated as Big Eight and Midlands Tournament champion, entering the final [championship] match of the NCAA tourney with a 33-0 record. He lost the 1970 final to Larry Owings of the University of Washington, 13-11, in one of the most famous matches in collegiate wrestling history to finish second and end with a 181-1 college record. As painful and shocking as it was, Gable later claimed it made him a better wrestler.

Gable graduated with a B.S degree from Iowa State in 1971 and served as an assistant on the Iowa State wrestling staff while he continued to train and compete internationally, going 17-1-0 on the year while winning the Midlands Tournament for the fourth time, taking gold in the Pan Am Games and earning the World Freestyle Championship in Sofia, Bulgaria. In 1972, he again won the Midlands, went 11-0 internationally and won the Tblisi Tournament, where he was named Most Outstanding Wrestler. Most importantly, he dominated the Summer Olympic Games in Munich as no wrestler ever had, winning all six of his matches without giving up a single point in route to winning the gold medal. The Soviet wrestling team had promised that they would “scour the Eastern bloc to find a wrestler who could take down Dan Gable”. They were unsuccessful.

Gable became the head wrestling coach at the University of Iowa in 1976 and went on to become the most successful coach in American collegiate history. The Hawkeyes won the NCAA title each year from 1978 to 1986, a record nine in a row. His teams compiled a dual meet record of 355-21-5 and he coached 152 All-Americans, 45 national champions, 106 Big Ten champions and 12 Olympians, including four gold, one silver and three bronze medalists. Iowa won 25 consecutive Big Ten championships, 21 with Gable as head coach and four with him serving as an assistant or administrator. Mr. Gable was also the head coach of the U.S. Olympic team in 1980, 1984 and 2000 and served as an assistant in 1976 and 1988. He also coached six World Teams and ten World Cup teams during his career.

Dan Gable has been named top wrestler of the 20th century by Gannett News Service, top 100 Olympians of all time, one of the top coaches in the 20th century by ESPN and was honored as the state of Iowa’s top sports figure of the past 100 years. The University of Iowa dedicated a bronze statue to Gable outside Carver Hawkeye Arena in April of 2012.

“Once you’ve wrestled, everything else in life is easy”– Dan Gable