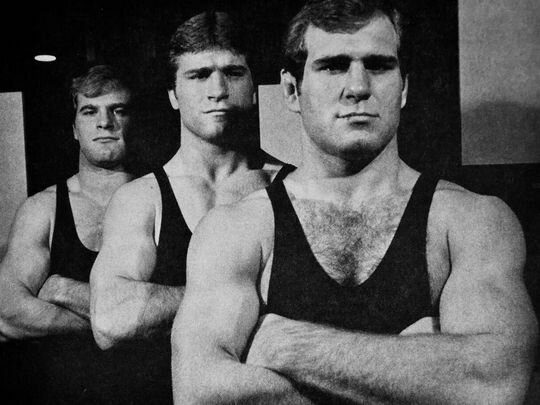 The Banach Brothers are one of the toughest and most accomplished sports families in wrestling history. Edward Joseph Banach was born in Newton, New Jersey, on February 6, 1960, five minutes before his fraternal twin, Ludwig David Banach.  Ed and Lou were the youngest of 14 children born to Warclaw Banach, a polish immigrant who had met his wife, Genevieve, while escaping a Nazi prisoner of war camp during World War II.  When the boys were two, a fire destroyed their home and family.  Warclaw abandoned his family and his sons never saw him again.  Genevieve suffered a nervous breakdown and the children were scattered to foster homes.  The twins, who remained together, were given up by one couple in the first year before being taken in at age four by Alan and Stephanie Tooley, who adopted them along with their brother Stefan, who was one year older.  The Tooleys moved to Port Jervis, New York, where the boys attended Port Jervis High School.  Steve and Ed made the varsity wrestling team, but Lou was cut as a 140 pound sophomore.  Determined to get stronger, he fashioned a weight room in the basement using wheels from old trains [Alan Tooley was a railroad brakeman] and ropes for pulleys, then put himself through grueling workouts. He gained over 30 pounds of muscle during the summer before junior year and joined his brothers on the varsity team.  The trio won 90 straight bouts while leading the Red Raiders to the state wrestling title.  In 1977, Steve graduated and earned a wrestling scholarship to Clemson, while the twins won state titles—Ed in the 177-pound division, and Lou as a heavyweight—feats that they repeated as seniors. Ed and Lou Banach accepted scholarships to wrestle for legendary coach Dan Gable [Daily Dose, September 30] at the University of Iowa.  Gable, who had first seen the twins compete as high schoolers at a junior national meet in Iowa City, came to Port Jervis and told Red Raider wrestling coach Dr. Mark Faller, he “had a hotel room in town and would not be leaving until he got the boys signed.”  In 1979, Steve Banach, who had been named co-captain and made the ACC finals at 190 pounds as a freshman at Clemson, transferred to Iowa to be with his brothers, while Ed and Lou redshirted.  The following year, Steve earned the first of his three career varsity letters, Lou earned his first, while Ed won 41 matches, including the Big Ten and NCAA titles, and was named All-American at 177 pounds.  As sophomores, Ed repeated as Big Ten and NCAA champ while Lou took the NCAA crown as a heavyweight [220 pounds and up] despite weighing 210.  In 1982, Ed Banach was seeking his third straight national championship at 177 pounds and entered the NCAA tourney as the top seed.  He won his first four matches—three with pins—to get to the finals, where he would face Mark Schultz [portrayed by Mark Ruffalo in the 2014 film, “Foxcatcher”].  Schultz, winner of the 1981 title at 167 pounds, had moved up to 177 and out-pointed Banach to win in what many consider the greatest final in NCAA wrestling history.  After Lou placed third in the championship, the Banach Twins attacked their senior years with a vengeance, including private 4:00 am training sessions with Gable, who said Ed was more “gung ho” about wrestling, that it was “life and death with him” but Lou “seemed to pick things up easier.”  In 1983, Ed—who had moved up to 190 pounds–claimed his third NCAA title, while Lou won his second in the heavyweight class. All three Banach brothers competed in the 1984 Olympic Trials.  Steve lost in the final and retired from wrestling, while Ed and Lou earned a spot—along with the Schultz brothers—on the Olympic Freestyle Wrestling team.  Competing at the Anaheim Convention Center, Ed won his first three matches by a combined score of 37-4, pinned his fourth opponent, and beat Akira Ota of Japan, 15-3, to win the gold medal at 198 pounds despite wrestling with a concussion—the 14th he had suffered in his career.  Lou followed in the 220 pound class, pinning his first two opponents in less than two minutes, beating his third 11-1 and pinning Joseph Atiyeh, a Syrian who attended LSU, 61 seconds into the final match to win the gold medal. Stefan Banach graduated from Iowa in 1983 and joined the Army, serving for 27 years.  He was a member of the All-Army wrestling team before becoming a Colonel and serving nine years as a Distinguished Member of the 75th Ranger Regiment.  Colonel Banach led a night combat parachute assault into Afghanistan following the September 11 attacks on the U.S., led a second jump into western Iraq in 2003, and created the Company Intelligence Support Team [COIST] concept for the U.S. Army.  Steve Banach earned a Bronze Star Medal for valor in combat, two Bronze Combat Jumps Stars and a Bronze Star Medal for Service to the nation before serving as Dean at the U.S. Army’s prestigious School of Advanced Military Studies.  After graduating Iowa in 1983 with a career record of 90-14-2, Ludwig Banach coached wrestling at West Point before becoming a First Lieutenant in the U.S. Army.  He obtained an M.B.A. from Penn State, wrote poetry, authored several books and is a member of the National Wrestling Hall of Fame.  Edward Banach pinned 73 opponents at Iowa, more than any wrestler in Hawkeye history.  He was 141-9-1 in his college career, was four times All-Big Ten and All-American, won three NCAA championships and was the 1983 Big Ten Athlete of the Year.  “The Horse” later coached at Iowa State, mentoring seven NCAA champions, 19 All-Americans and was named National Assistant Wrestling Coach of the Year after helping the Cyclones win the 1987 national championship.  His plaque in the National Wrestling Hall of Fame reads, “A thoroughbred in all respects.” In 2015, the Banach brothers released a book, “Uncommon Bonds: A Journey in Optimism” detailing their lives and story.