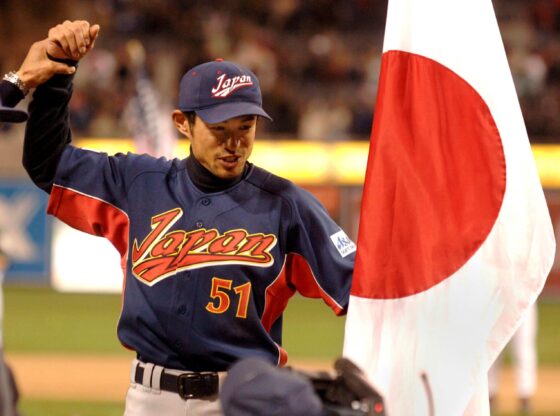 In Major League Baseball, the benchmark for hitting excellence is collecting 200 hits in a season. Two players accomplished that in 2014 and none did the season before. Ichiro Suzuki had 10 consecutive 200-hit seasons, the longest streak by any player in history.

Born on October 22, 1973, in Toyoyama, Aichi, Japan, an agricultural town of less than 14,000 residents near Japan’s third-largest city, Nagoya, he was the second of two boys. He first played baseball at age seven and followed a daily workout routine with his father of throwing 50 pitches, fielding 50 ground balls, 50 fly balls and hitting 500 pitches. As a little leaguer, he had the word “concentration” written on his glove and was known for his speed. He attended Nagoya Electric High School, an institution that offered rigorous academics and a prestigious baseball program. He possessed an exceptionally strong arm and was primarily used as a pitcher. He also hit .505 and, despite his 5’9”, 124 pound frame, hit 19 home runs during his high school career. Professional scouts were concerned about his lack of size so, despite his impressive high school numbers, Suzuki was not drafted until the fourth and final round of the 1991 professional draft by the Orix Blue Wave. He made his Pacific League debut in 1992 as an eighteen-year-old but spent most of his first two seasons in the farm system before becoming an every-day player in 1994. That year, he became the Blue Wave’s leadoff hitter and set a Japanese single-season record by collecting 210 hits, the first player ever to top 200 in one year, and in a 130 game season. His .385 batting average was also a Pacific League record and won the 20 year old outfielder the first of seven consecutive batting titles and first of three straight Pacific League MVP awards. He led the Blue Wave to its first PL pennant in 12 years during the 1995 season while driving in 80 runs, hitting 25 homers and stealing 49 bases. The following year Orix beat the Yomiuri Giants to win the Japan Series, and Ichiro played in an exhibition series against a visiting team of Major League All-Stars following the season. He participated in a seven game exhibition series against MLB All-Stars after the 1998 season as well, batting .380 and stealing seven bases in the series. In 2000, Ichiro was in the final year of his contract and the Blue Wave was not likely going to be able to afford to keep him, so Orix accepted $13 million from the Seattle Mariners for the right to negotiate with Ichiro. He signed a three year, $ 14 million contract with Seattle prior to the 2001 season and left Japan with 1,278 hits, seven Gold Glove Awards and a .353 career average.

In 2001, Ichiro became the first Japanese position player to play for a Major League team and the Mariners issued him uniform # 51. He was initially hesitant to wear that number it as it had previously belonged by Hall of Famer Randy Johnson and, in order to avoid insulting Johnson, Suzuki sent a personal message to the lanky lefthander promising not to “bring shame” to the uniform. Many in the U.S. believed he was too small and frail to succeed against big league pitching or endure the rigorous 162 game schedule. Ichiro immediately proved his skeptics wrong, making a play that came to be known as “The Throw” in his eighth major league game and going on to finish the season with a rookie-record 242 hits, earning a Gold Glove, batting .350 and stealing 56 bases. He was the first player to lead the league in the latter two categories since Jackie Robinson in 1949. That season, he earned the most votes for the All-Star game, becoming the first rookie to achieve that honor and was voted Rookie of the Year and AL MVP, joining Fred Lynn as the only player ever to win those awards in the same year. Ichiro had 208 hits in 2002 and 212 the following year to become just the third player in history to begin his career with three 200-hit seasons. In 2004, he set a new single season record with 262 hits. That same year, he collected his 2,000th career hit and became the first player to ever gather 50 hits in different months of the season. Ichiro became the fastest player to reach 1,000 hits in MLB history in 2005 and, in the spring of 2006, helped Japan win the inaugural World Baseball Classic over Cuba. In 2006, he scored 110 runs and stole 45 bases in 47 attempts in route to his sixth Gold Glove, sixth All-Star game and sixth 200 hit season in his six years in the big leagues. He hit in 25 straight games early in the 2007 season and stole 45 consecutive bases without being caught to break the AL record that had been held by Tim Raines. Ichiro went 3-for-3, including an inside-the-park home run, at the 2007 All-Star Game and was named MVP. It is the only inside-the-park homer that has ever been hit in the Midsummer Classic. He became the first player in MLB history to reach the 200 hit mark in 10 consecutive seasons in September of 2010 and became Seattle’s all-time hits leader in 2011, passing Edgar Martinez. He was traded to the New York Yankees at midseason in 2012 and promptly hit safely in his first 12 games wearing pinstripes and, in August of 2013, collected his 4,000th professional hit [1,278 in Japan, 2,722 in MLB]. Ichiro joined the Miami Marlins prior to this season and earned his 4,192nd top-level career hit on August 14, passing Ty Cobb to move to second on the list, behind only Pete Rose.

Mr. Suzuki holds over 22 MLB records, has won 10 Gold Gloves, three Silver Slugger Awards, has twice led the AL in batting and once in stolen bases. He has played in 10 All-Star games in the Major Leagues and 7 more in Japan. He was a three-time MVP, seven-time Gold Glove winner, seven-time batting champion in Japan’s Pacific League and also led that circuit in steals and RBI in 1995. He is the first MLB player to enter the Japanese Baseball Hall of Fame and leads all active MLB players in stolen bases, with 497. In Japanese, the name Ichiro means “brightest, most cheerful”.

On this date in 2004, Ichiro Suzuki collected his 258th hit of the season to break George Sisler’s single-season record of 257, a mark that had stood for 84 years. Sisler’s daughter, Francis Sisler Drochelman, was on hand for the game at Seattle’s Safeco Field.