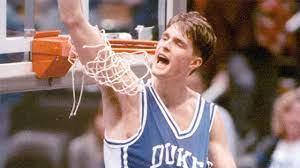 Happy 47th birthday to one of the most polarizing college athletes of all time.

Christian Donald Laettner was born in Angola, New York—two miles west of Lake Erie and  22 miles southwest of Buffalo—on this date in 1969.  He was the second of four children born into a blue collar, Roman Catholic family of Polish descent.  Laettner [LATE-ner] was one of the youngest students in his grade, so his schoolteacher mother had him repeat eighth grade before enrolling him in the Nichols School in Buffalo.

Nichols—alma mater of David Milch, creator of television’s Hill Street Blues, LA Law and Deadwood—is a co-educational, college preparatory school in Buffalo, and Laettner worked as a janitor in summers and received financial aid to help defray the costs of the private institution.  Laettner, who had grown to 6’7”, earned a starting varsity position as a freshman and attracted the interest of St. Bonaventure College, located about 90 minutes from Angola.

After attending Howard Garfinkel’s Five-Star basketball camp the following year, he became a top prospect of nearly every Division I program.  As a 6’9”, 210 pound sophomore, Laettner led Nichols to the 1985 state title.  The Vikings successfully defended their championship the following year and reached the state semifinals in 1987.  In his four year high school career, Laettner scored over 1,000 points and left as Nichols’ all-time leading scorer.

He was attracted to the Atlantic Coast Conference’s style of play and only made three official visits—to North Carolina, Duke and Virginia.  In November 1987, he chose Duke–who had never won an NCAA championship–over Carolina, who had.  “I didn’t want to go to the already established team,” said Laettner.  “I wanted to go to the team that was looking like they were heading there…I wanted to be part of the process.”

Duke reached the Final Four in Christian Laettner’s freshman year.  The following season, they played in the championship game, where they were crushed by UNLV, 103-73.  In 1991, Duke got redemption, handing heavily-favored UNLV their first loss of the season with a 79-77 victory in the national semifinal game.

The Blue Devils went on to win the first NCAA title in school history with a 72-65 victory over Kansas and the 6’11”, 245 pound center was named the tournament’s most outstanding player.  In 1992, Duke went 34-2 and beat Michigan’s Fab Five [Daily Dose, 3/9/16] in the title game, 71-51.  Laettner averaged 21.5 points on the season and garnered every major national player of the year award while the Blue Devils became the first repeat champions since the 1973 UCLA Bruins.

Laettner became the first player in NCAA history to start in four consecutive Final Fours and established several NCAA tournament records, including most points scored [407].  In four years, he played 23 out of a maximum possible 24 NCAA tournament games, winning 21; both are records.  Mr. Laettner is third on Duke’s all-time scoring list and is third in rebounds, sixth in blocks and fourth in most steals in school history.

Laettner had several clutch performances in the NCAA tournament.  Most famous—and one of the most memorable in sports history—was the turnaround jump shot he swished as time expired in overtime to beat Kentucky by one point in the 1992 regional final. In that game, which many critics consider one of the greatest in college history, Laettner shot a perfect ten for ten from the field and sank ten of ten free throws for 31 points.

In the 1990 regional final against UConn, Duke trailed by one point with two seconds remaining before Laettner nailed a jumper to win at the buzzer.  He also swished the game-winning free throws against defending national champion UNLV in the 1991 semifinal, avenging Duke’s 30 point loss in the final the prior year.  Following his senior season, ESPN voted his 1992 turnaround jump shot “ Outstanding Performance Under Pressure” and “College Basketball Play of the Year.”  Mr. Laettner was also voted “Outstanding College Basketball Performer of the Year” by ESPN following the 1992 season.

After being the only college player chosen for the 1992 Olympic “Dream Team” [Daily Dose, 9/21/15] and winning a gold medal with Team USA at the 1992 Barcelona Olympics, Laettner was selected by the Minnesota Timberwolves with the third pick of the 1992 NBA Draft.  He played for six NBA teams over 13 seasons, highlighted by being named to the 1993 All-Rookie Team and 1997 All-Star Team.  In 868 career NBA games, Laettner averaged 12.8 points and 6.7 rebounds per game.

Despite being one of the greatest college players of all time, Mr. Laettner was widely reviled by opposing fans throughout his career.  A blue-collar kid in reality, he was perceived as an entitled Duke “blue blood” which, combined with his boyish good looks and scowling on-court demeanor, made him an unlikable villain.

More than 20 years after graduating from Duke, he was voted the most hated college basketball player in history in an ESPN poll, prompting the network’s creation of the 30 for 30 documentary I Hate Christian Laettner.  He was particularly resented for stepping on the chest of Kentucky player Aminu Timberlake during the 1992 regional final. As a member of the Dream Team, Laettner has been enshrined into the U.S. Olympic and Naismith Basketball halls of fame.

In 2008, he was inducted into the Polish-American Hall of Fame and two years later entered the College Basketball Hall of Fame.  He is also philanthropic, having donated one million dollars to the Nichols School to create scholarship funds for students in need of financial aid.  In partnership with former Duke teammate Brian Davis, Laettner also donated two million dollars toward a new practice facility for the Duke men’s basketball program.