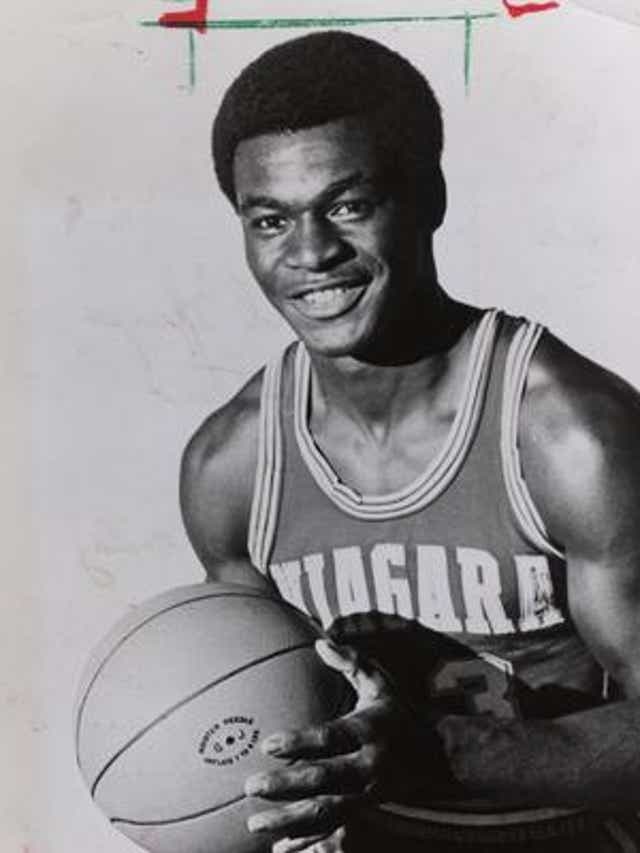 The Buffalo Braves are the NBA’s forgotten franchise

The Braves was an NBA franchise based in Buffalo, from 1970 to 1978.  With an overall record of 259-397 [.394], they lost far more than they won.  Playing in the Atlantic Division, Buffalo finished 20 or more games behind the division leader in five of eight seasons, including 1972-73, when they finished 47 games back of the Boston Celtics.  The Braves enjoyed three winning seasons between 1973 and 1976, making the playoffs in each of them.  Their best was 1975-76, when they went a franchise-best 49-33 and beat the Philadelphia 76ers in the first round of the Eastern Conference playoffs for the only playoff series win in team history.  With attendance sagging, the financially-strapped Braves moved to San Diego in 1978 and became the Clippers.  Six seasons later, the franchise relocated to Los Angeles.  In 46 NBA seasons, the Braves/Clippers have won two division titles but have yet to advance past the second round of the playoffs.

On February 6, 1970, the National Basketball Association expanded by three teams for the 1970-71 season, adding the Buffalo Braves, Portland Trail Blazers and Cleveland Cavaliers.  The Braves were owned by 33-year-old John Snyder, who had built Freezer Queen, a Buffalo-based food packaging company that pioneered the TV dinner industry.   One month after the expansion announcement, the Braves participated in the 1970 NBA Draft.  Bypassing Calvin Murphy, a quicksilver guard from nearby Niagara University who ended up in the Naismith Basketball Hall of Fame, Buffalo used the 15th overall pick to select Princeton’s John Hummer.  Following three nondescript seasons, the Braves dealt “Hummer the Bummer” to the Chicago Bulls.  In the 1970 expansion draft in May, the Braves selected 11 players, including six-time All-Star Bailey Howell from the Boston Celtics.  Howell was immediately traded to the Philadelphia 76ers in exchange for Bob Kauffman, who became the Braves’ first star.  Nine players from the expansion draft joined the Braves for their inaugural season, but only three played more than one season in Buffalo.

The NBA had two previous teams in western New York.  Rochester had the Royals from 1948 to 1957, who made stops in Cincinnati and Kansas City before ending up in Sacramento as the Kings.  The Nationals played 17 seasons in Syracuse before bolting to Philadelphia in 1964 and becoming the 76ers.  Buffalo was a football town.  The Bills are a charter member of the AFL and won back-to-back league championships in 1964 and 1965 and are beloved in western New York.  The Queen City hit the jackpot in 1970, when basketball and hockey came to Buffalo.  The Sabres joined the NHL in 1970, and the club immediately secured a lease to expand the Buffalo Memorial Auditorium – the Aud.  At a cost of $ 8.2 million, the city raised the roof of the Aud and added a 5,000-seat balcony, increasing seating capacity from just over 10,000 to nearly 16,000.  The Sabres were a marketing juggernaut from the onset, fueled in part by Canadians who readily crossed the border to snap up season tickets.  Buffalo loves hockey, and the Sabers sold out the Aud for 15 straight years.

Meanwhile, Braves attendance was spotty.  The club attempted to regionalize its fan base by shifting some home games to Toronto’s Maple Leaf Gardens.  They shared the Aud with the Sabres and Canisius College got third dibs on dates, leaving them with mostly weeknight games.  Desperate for attendance, the Braves regularly offered tickets for 50 cents.  In 1976, former Kentucky governor and Kentucky Fried Chicken magnate John Y. Brown bought the team from Snyder.

Named for the Native American history in Buffalo, the Braves sported one of the best uniforms in NBA history.  The Columbia blue, white and black look was classic.  Their logo was a red feather hanging off a large blue letter “B” over the wordmark, Buffalo Braves, in red.  They opened with a 107-92 victory in their very first game [over Cleveland, who went on to post the worst record in the NBA that season].  The success was short-lived, as the overmatched Braves limped to a 22-60 mark in year one.  Naismith Hall-of-Famer Dolph Schayes was 1966 NBA Coach of the Year with the 76ers.  After serving as supervisor of NBA referees for four years, he was named first coach of the Braves in 1970, but resigned one game into his second season in Buffalo.

Jack Ramsey was hired in 1972 and led the Braves to the playoffs in his second season.  After leading the Braves to the playoffs in three of his four seasons at the helm – and knowing Snyder was looking to sell the franchise — Ramsey left to coach the Portland Trailblazers in 1976.  In his first season in Portland, the future hall-of-famer led the Blazers to the NBA title.  The Braves underwent a coaching carousel following Ramsey’s departure and would go through four coaches in two seasons . Tates Locke, who hired 22-year-old Bob Knight as an assistant at Army, was replaced in 1977, followed by Bob MacKinnon, Joe Mullaney and Cotton Fitzsimmons.

Although only in Buffalo a short time, the NBA’s forgotten franchise featured some greats.  Bob McAdoo was spectacular and still holds several single-season franchise records, including points, blocks, and minutes.  The 1973 Rookie of the Year led the league in scoring in three of his four full seasons in Buffalo and remains the last player in NBA history to average both 30 points and 15 rebounds per game.  In 1973-74, McAdoo led the NBA in field goal percentage and made the first of five All-Star teams.  “Big Mac” was league MVP in 1974-75 and won two NBA titles with the Lakers before landing in the Naismith Hall of Fame in 2000.

Randy Smith was a workhorse.  A three-sport All-American at nearby Buffalo State, Smith set an NBA record for consecutive games played, with 906.  The 1978 All-Star Game MVP held the franchise record for assists until 2016, when it was broken by Chris Paul.  The club drafted wisely.  In eight seasons in Buffalo, three Braves were named Rookie of the Year –McAdoo [1973], Ernie DiGregorio [1974] and Adrian Dantley [1977].  Moses Malone logged six minutes of playing time in two games for the Braves.  Acquired in exchange for a first round draft choice, Malone – who would later win three league MVP Awards —  was traded to the Houston Rockets [for two first-round picks] one week into the 1976 season.  Nate “Tiny” Archibald led the league in scoring and assists in 1973.  The Braves obtained him in 1977, but he tore an Achilles tendon before the start of the season and never played a game.  Tiny was dealt to Boston the following year.

California businessman Irv Levin bought the Boston Celtics in 1974.  He wanted to move the Celtics to his home state, but knew the NBA would not allow its marquee franchise to leave Boston.  In a deal brokered by future NBA Commissioner David Stern, Levin swapped teams with John Y. Brown and took control of the Braves.  In 1978, NBA owners voted 21-1 to allow Levin to relocate the Braves to San Diego and become the Clippers.  Three years later, Mr. Levin sold his team to Donald Sterling for $ 13.5 million.  In 2014, the Clippers were purchased by former Microsoft CEO Steve Ballmer for $ 2 billion.

On this date in 2009, the Los Angeles Clippers defied odds.  With just a 17.7 percent chance of landing the top pick, they won the NBA Draft Lottery and later selected Blake Griffin with the first overall selection of the 2009 NBA Draft.