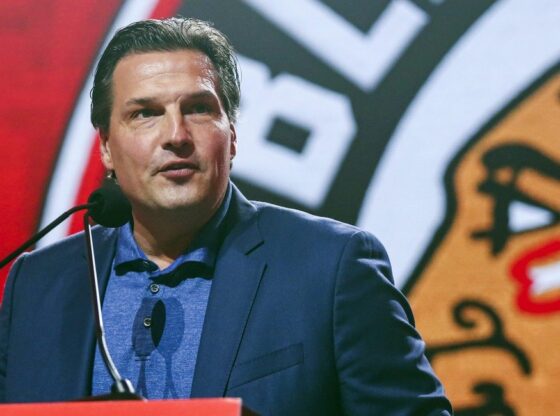 When Edward Walter Olczyk [OHL-chuk] was six, he handed his mother a yellow pamphlet with an invitation to learn how to skate at Ballard Sports Complex near their home in the Chicago suburb of Niles, Illinois.  Diana Olczyk’s oldest son wanted to give it a try.  Eddie skated and a hockey family was born.  Ed Sr. and Diana were honest, hardworking, genuine people.  They sacrificed so their son could play.  “I didn’t know how expensive it was.  We were simple people,” Diana explained, “my husband worked a lot of hours.”  Ed had played high school football and the Olczyks were a football and baseball family.  “Once you’re in, you’re in,” said Eddie, “I knew what I wanted to do when I was 12 years old.  I had one goal.  I was lucky enough to have the support of my folks and I had a gift.”  Ed and Diana borrowed money and signed a promissory with the bank so their son could go on hockey trips. To this day, the Olczyks have a plaque in their foyer that says, “We Interrupt This Family for Hockey.”

Eddie Olczyk was born on this date in 1966.  He grew up in Palos Heights, Illinois, and attended Brother Rice, an all-male Catholic college prep high school—and alma mater of actor John C. Reilly, who played Cal in Talladega Nights, and Kevin Cronin, lead singer for REO Speedwagon.  At 16, starred on Team Illinois, a AAA Midget team that won the national title against Pat LaFontaine’s [Daily Dose, May 19] Detroit Compuware squad.  He then moved to Canada to play for the Strattford Cullitons of the Greater Ontario Junior Hockey League before being named to the 1984 U.S. Olympic Hockey Team, who placed seventh in the Sarajevo Winter Games.  Later that year, 18-year-old “Eddie O” was selected by his hometown Chicago Blackhawks with the third overall pick of the 1984 NHL Entry Draft, two spots behind Mario Lemieux [Daily Dose, October 5].  He scored a goal in his first NHL game and skated for three years on the infamous “Clydesdale Line” with Troy Murray and Curt Fraser, all of whom weighed over 200 pounds.  Olczyk played over 1,000 games for six different teams in 16 NHL seasons.  In 1989-90, he collected at least one point in 18 straight games, a record for an American-born player that was later broken by Chicago’s Patrick Kane in 2015.  While playing for Stanley Cup champion New York in 1994, his Rangers teammates voted him with the Players’ Player Award, given to the best team player.  Since he only played 37 regular season and one Conference Final game, his name was going to be excluded from the Stanley Cup.  After his teammates successfully lobbied for him,  Olczyk’s name was included on the Cup along with those of his New York Ranger teammates.  “Enzo” finished his playing career in Chicago, retiring following the 2000 season.

An avid horse owner and better, Olczyk took the Stanley Cup to Belmont Park and had a photo taken with Kentucky Derby winner Go For Gin in June 1994.  During an NHL work stoppage three months later, he was asked by the management of Meadowlands Racetrack to work on their in-house broadcast, and Eddie O got his start.  In 2000, he joined FSN Pittsburgh as color analyst for the Penguins.  Three years later, he left the booth for the bench, where he served as head coach of the Pens from June 2003 to December 2005.  In 2006, Eddie O partnered with Pat Foley, the “Voice of the Blackhawks,” doing color on Comcast Sportsnet Chicago and WGN-TV and the pair’s ratings have increased over 130 percent since 2008.  In 2010, Olczyk joined Michael “Doc” Emrick in covering the 2010 Vancouver Olympics, where he described the 5-3 U.S. win over Canada as “tremendously tremendous.”  Doc and Eddie—with the great Pierre McGuire inside the glass—now cover hockey for NBCSN, forming the best broadcast team in all of televised sports.  Olczyk also covers horse racing for NBC, bringing vivid and insightful analysis to the sports’ biggest races.  “Getting to broadcast hockey and horse racing is like hitting the lottery again.  It’s amazing.”  Enzo is a knowledgeable horseman, having hit a Pick-6 wager at Hollywood Park in 2009 for $ 500,000.  He also inherited his parents’ work ethic.  On Saturday, June 11, of this year he provided all-day coverage of the Belmont Stakes from Belmont Park in New York.  He caught the first flight out the following day and flew cross-country to San Jose, where he, Doc and Pierre worked Game Six of the Stanley Cup Finals late that afternoon.  “Pucks and ponies,” smiles Mr. Olczyk, “you can’t beat it.”

Eddie O scored 342 goals and 794 points in the National Hockey League.  He represented the USA in nine international competitions, won a Stanley Cup, and is the recipient of the Ring Lardner Award, honoring broadcasters and writers who “exemplify the wit and warmth of Ring Lardner’s writing.”  Mr. Olczyk has earned two Emmy Awards for his work in television, is a member of the National Italian-American Sports Hall of Fame and was elected to the U.S. Hockey Hall of Fame in 2012.

He considers the two most thrilling events he has covered to be the gold medal game at the 2010 Winter Olympics and 2015 Belmont Stakes, where American Pharoah [Daily Dose, April 21 ] won the Triple Crown.  In 1972, six-year-old Eddie Olczyk started a hockey family.  He played 16 years in the NHL, his younger brother Ricky was captain at Brown and is now assistant GM of the Carolina Hurricanes.  Eddie Jr. played at UMass and is now coaching with the Niagara Purple Eagles.  Olczyk’s middle son Nick plays for the South Shore Kings of the USPHL, while his youngest son Tommy was Academic All-Big Ten for Penn State in 2015-16. 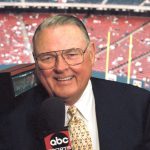