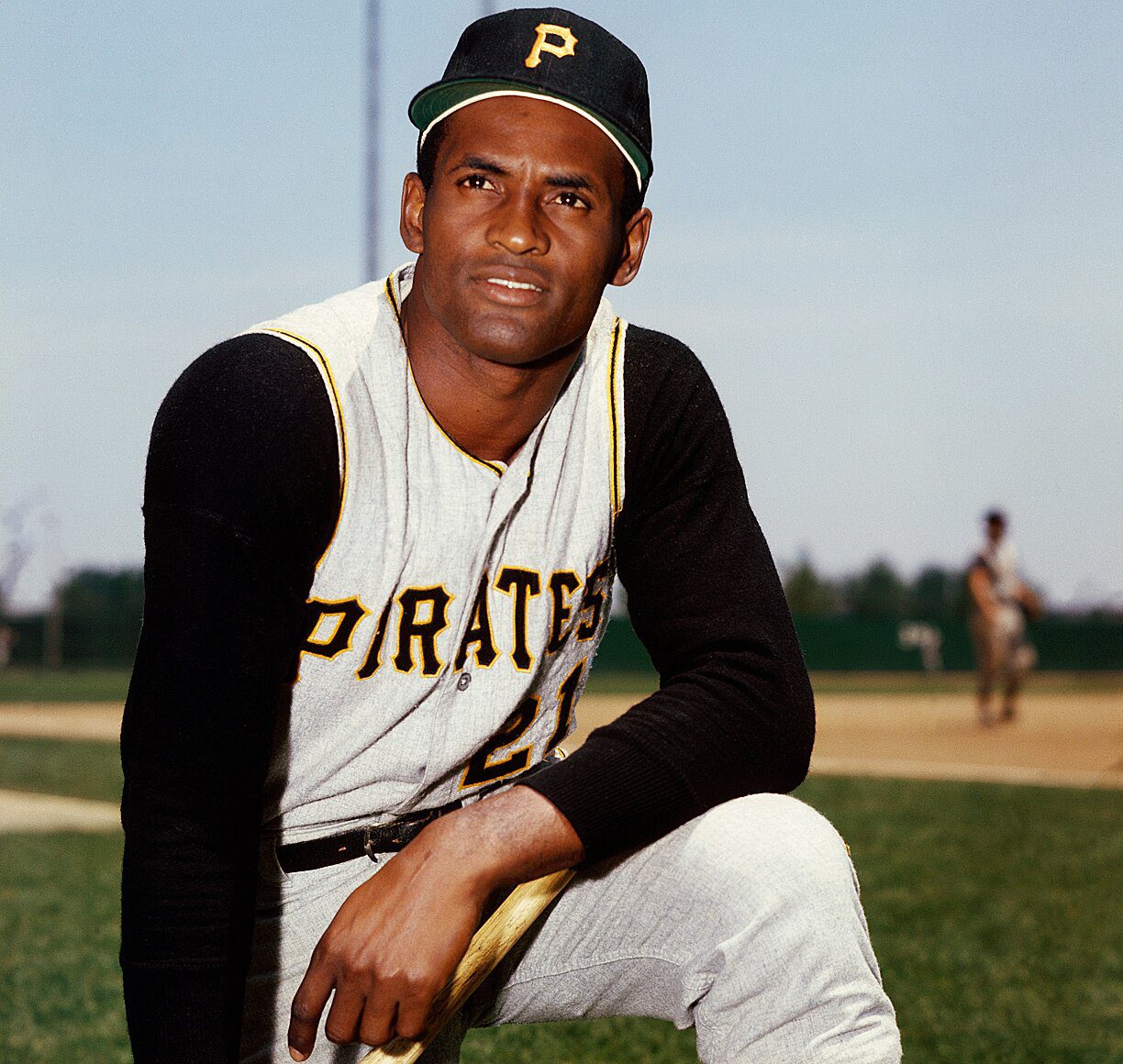 Roberto Enrique Clemente Walker was one of the greatest right fielders in baseball history. Born in Carolina, a small town along the northeast coast of Puerto Rico, on this date in 1934, he was the youngest of seven children.  As a boy, he worked alongside his father in the sugarcane fields and played baseball in his spare time.  Clemente attended Julio C. Vizarrondo High School in Carolina and joined the Ferdinand Juncos of the Puerto Rican Baseball League at 16.  The following year, he was lead-off hitter for the Santurce Crabbers.  Clemente signed with the Brooklyn Dodgers out of high school and played the 1954 season with the Montreal Royals, their AAA team.  There, he befriended future Dodger manager Tommy Lasorda, who had been sent down to AAA to make room on the big league club for a new signee named Sandy Koufax.  In December 1954, Clemente was obtained by the Pittsburgh Pirates in the Rule 5 draft, which allows teams to select players from minor league rosters they intend to place on their major league team.  The deal cost Pittsburgh $ 4,000.  On April 17, 1955, 20-year-old Roberto Clemente made his big league debut against the Dodgers—the team that originally drafted him out of high school.  Playing in Forbes Field in Pittsburgh, he started in right field and singled off Johnny Podres in his first at-bat, going one-for-four on the day. After becoming the Pirates’ starting right fielder as a rookie, Clemente had his breakout year in 1960, batting .314 with 16 home runs and 94 RB while being named to his first All-Star team.  He then reeled off seven straight years in which he hit over .300, including 1966, when he was named NL MVP after belting 29 homers and driving in 119 runs.  Being a Latino player in 1960s Pittsburgh was not easy; Clemente struggling with a language barrier and racism.  Pirates radio broadcaster Bob Prince called him “Bobby” in attempts to Americanize Clemente.  Proud of his Latin heritage, Clemente bristled at the name.  He was reliable, hard-working, and often misunderstood.  Clemente was also one of the best players in baseball.  After leading the Pirates to the World Series title in 1971, Clemente was plagued by injury for much of the following season.  He started just one game between July 9 and August 22 and by August 25 his average had dipped to .301.  “Arriba” got hot late, collecting 35 hits in 100 at bats from August 27 to September 28.  On September 30, 1972, the Pirates faced the New York Mets in a meaningless game, having already clinched a playoff spot.  Needing one more hit to get to 3,000 for his career, Clemente faced Mets lefthander Jon Matlock—who would go on to be named NL Rookie of the Year—in the fourth inning of a scoreless game in Pittsburgh.  Clemente hit a stand-up double to become the eleventh player in MLB history to collect 3,000 career hits and the first Latino to do so.  It was the final hit of his career. Roberto Clemente was almost criminally underrated.  Playing in Pittsburgh, he was overlooked and undervalued.  Despite hitting safely in all seven games of the 1960 World Series, he was overshadowed by Bill Mazeroski’s walk off homer in Game Seven.  Clemente was the consummate “Five Tool” ballplayer—he hit for power, hit for average and could run, field and throw.  And how he could throw!  Possessing a rocket for an arm, Clemente threw out 266 runners during his 18-year career—and from right field, which requires the strongest arm of all fielders.  Clemente is the first Latin player to win a World Series, be named regular season MVP and receive a World Series MVP trophy.  “No other player surpasses Clemente in all-out effort,” wrote Gary Mihoces.  “He runs out every infield grounder as if the World Series were at stake.”  He hit .317 lifetime against some of the best pitchers the game has ever seen, including Koufax, Don Drysdale, Bob Gibson, Steve Carlton and Tom Seaver [Daily Dose, 1/7/16].  Clemente is the first Latin player to collect 3,000 major league hits.  He won 12 consecutive Gold Gloves, was a 15-time All-Star, and won four batting titles.  Clemente was a quiet humanitarian who stood up for minority rights.  Since 1971, MLB has annually given the Roberto Clemente Award to the player who “best exemplifies the game of baseball, sportsmanship, community involvement and the individual’s contribution to his team” as voted on by fans and members of the media.  Roberto Clemente helped Pittsburgh win two World Series titles, the second of which came in 1971.  Playing against the favored Baltimore Orioles, the 37-year-old Clemente batted .414, hit two home runs and played stellar defense to earn Series MVP honors.  In that series, he played “something close to the level of absolute perfection,” wrote Roger Angell, “as if it were a form of punishment for everyone else on the field.” Roberto Clemente died December 31, 1972, in a plane crash while delivering goods to earthquake victims in Nicaragua.  He was 38.  The Baseball Hall of Fame waived the mandatory five year waiting period and voted Roberto Clemente into the Cooperstown in 1973, making him the first Latin player inducted.

“He gave the word ‘complete’ a new meaning.  He made the word ‘superstar’ seem inadequate.  He had about him the touch of royalty.”- Former MLB Commissioner Bowie Kuhn