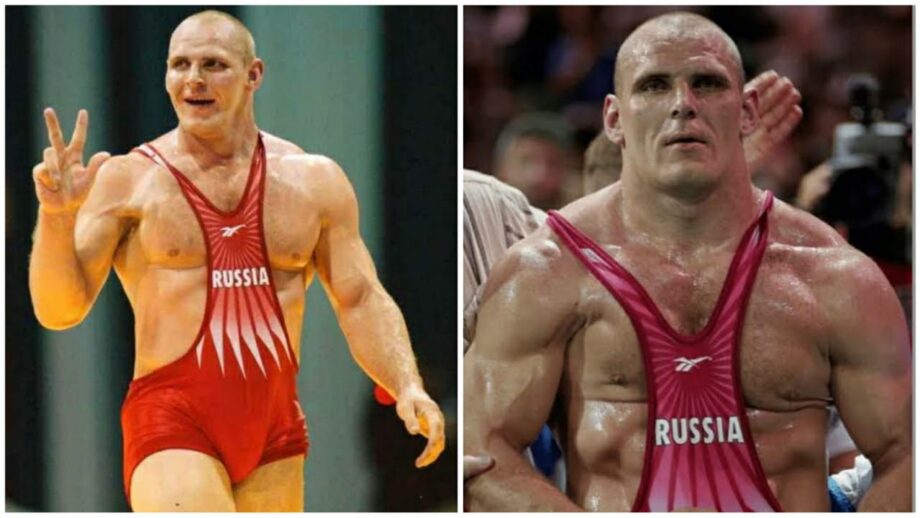 “The loser is usually the one who is ready to lose.  Fight, overcome difficulties, control your emotions – and you will win.”

Aleksandr Karelin is the greatest Greco-Roman wrestler of all time.  The only three-time Olympic champion in Greco-Roman history, the Russian Bear competed in four straight Olympics, winning three gold and one silver medal.  Competing in the heaviest weight class in the sport – 130kg [286 pounds and above] – Karelin did not give up a single point in six years of competition.

One of the most imposing human beings ever to roam the planet, Alexander the Great was a nine-time World Champion and captured a dozen European Championships.  In a career spanning 18 years, he was considered unbeatable, amassing a record of 882-2.  Karelin began training under the only coach he ever had, Viktor Kuznetsov, in 1981.  He won his first match the following year, then went undefeated until 1987, when he suffered his first loss [0-1] at the USSR championships to reigning champion Igor Rostorotsky.  Karelin would not lose again for 13 years.

The Russian King Kong was dominant.  A man of unprecedented strength, he bench-pressed 450 pounds. Karelin once bought a refrigerator, then carried it up eight flights of stairs – by himself – to get it into his apartment.  He trained three times per day to prepare for tournaments and won the gold medal at the 1990 World Championships after pinning all six of his opponents – each in under three minutes.

In the 1990s, heavyweight boxer Mike Tyson was known as the “baddest man on the planet.”  In terms of strength, intimidation and dominance, Tyson was no match for Alexsandr Karelin.  Dubbed The Experiment, public perception was that Karelin had been created in a lab.  Despite the optics, the 6’4”, 280-pound grappler never ducked a drug test, nor did he fail one.  People considered him a freak because, as Karelin explained, “I train every day of my life and they have never trained a day in theirs.”

Contested in every Summer Olympics since 1908, Greco-Roman wrestling forbids holds below the waist.  It is a sport that rewards upper body strength, of which Karelin has an abundance.  The Russian Bear was famous for the “Karelin Lift.”  When his opponent lay flat with his stomach on the mat, Karelin would get a grip around his competitor’s waist, lift him while leaning back, then slam his enormous adversary violently into the mat.  The maneuver was worth five points, the maximum award in Greco-Roman wrestling.  Many of Karelin’s opponents submitted to being pinned rather than face the pain and humiliation of enduring the Karelin Lift.

“I do not want to seem immodest,” said the humble Russian, who writes poetry, reads Solzhenitsyn, and attends opera and ballet. “But if I am asked, I must be truthful.  Yes, I see fear in the eyes of most of my opponents.”

Born on the frozen wastes of Soviet Siberia on September 19, 1967, Karelin weighed 15 pounds at birth.  His truckdriver father was an amateur boxer who encouraged his son to try a variety of sports, including boxing, basketball, volleyball and weightlifting.  As a child, Karelin hunted fox and sable while on skis.  He started wrestling at 13, by which time young Aleksandr was taller than his father.

At 15, Karelin suffered a broken leg at a wrestling tournament, then finished the match and won.  His mother burned his gear and forbade him to wrestle, but the determined teenager refused to quit.  He rehabbed by running through the Siberian woods and rowing a wooden rowboat.  Representing the Soviet Union, he won his first junior world title in 1985 and another in 1987.

His international breakthrough came in 1988.  After winning the European Championships, he advanced to the Seoul Olympics.  Down 0-3 with 15 seconds left in the Olympic final, he executed the Karelin Lift to collect five points and beat Bulgaria’s Rangel Gerovski, 5-3.

Perhaps no athlete in history was more favored that Karelin coming into the 2000 Sydney Olympics.  Boasting a record of 882-1, he had not lost a match since 1987.  The most dominant Greco-Roman wrestler ever, Karelin – who is so athletic he can perform backflips and do the splits — had not surrendered a single point in six years.  After winning his first four matches decisively, the Russian faced Rulon Gardner in the gold medal match.  It was supposed to be a coronation, not a competition.  Karelin had previously beaten the American 5-0, and the Bear was poised to claim an unprecedented fourth consecutive Greco-Roman gold.

Then the impossible – the unthinkable – happened.  In the second period, Karelin lost his grip on barrel-chested Gardner, giving the American one point.  Despite three warnings from the referee for passivity, Gardner held on, 1-0.  The Miracle on the Mat was the most stunning upset in wrestling history and rivals Team USA’s gold medal at the 1980 Winter Games as the biggest in Olympic history.  Following the match, Karelin left his shoes on the mat, signifying retirement.

Along with American wrestling legend Dan Gable, Karelin is one of the toughest men ever to grace the mat.  He won the 1993 worlds with two broken ribs.  At the 1996 European Championships in Budapest, he tore his right pectoral muscle so badly doctors predicted Karelin would not be able to use his right hand for months.  The Russian King King won the title, underwent emergency surgery, and returned three months later to win Olympic gold in Atlanta.

Aleksandr Karelin was named a Hero of the Russian Federation, the country’s highest honor, in 1997.  The national flag bearer at three consecutive Olympics, he received the Olympic Order, the Olympic Movement’s top distinction, in 2001.  Named one of the 25 best world athletes of the 20th century, Karelin was one of ten inaugural inductees into the International Wrestling Hall of Fame in 2003.  Mr. Karelin, who has a law degree as well as a Ph.D, currently works with the Putin Team, a social movement launched in 2017 by NHL player Alexander Ovechkin to support Russian President Vladimir Putin.