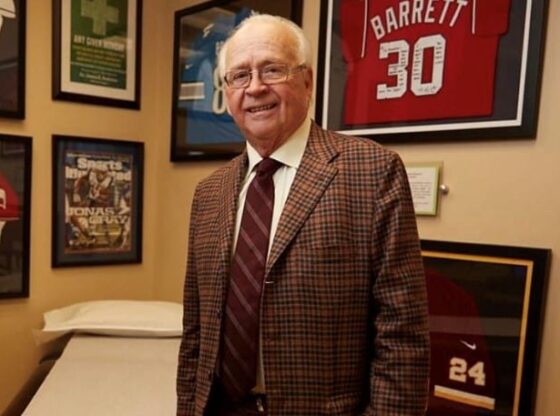 If a famous athlete gets hurt these days, three words are likely to follow:  Doctor James Andrews. Team physician for Auburn, the University of Alabama and the Washington Redskins, James Andrews is the most-trusted sports medicine surgeon in America.  Specializing in surgeries of the knee, shoulder and elbow, he has treated Tom Brady, Michael Jordan, Albert Pujols, Peyton Manning, Steve Carlton, Charles Barkley and Jack Nicklaus.  In addition to treating the most famous athletes in sports, Dr. Andrews performs up to 50 surgeries per week on high schoolers, housewives and weekend warriors.  With clinics in Birmingham, Alabama, and Pensacola, Florida, he strives to treat everybody as special regardless of their age, status or ambitions. A great surgeon is like a great athlete.  He must possess extraordinary physical skills, exceptional powers of concentration, an ability to work through adversity and embrace, not shrink from, a challenge.  A former athlete himself, Andrews treats his patients as peers, not celebrities.  Approximately 40 percent of his clients are high-level athletes.  He has performed over 2,500 Tommy John surgeries with a 90 percent success rate.  In 2000, John Smoltz feared a throbbing elbow might end his career.  Andrews performed Tommy John and Smoltz set a National League saves record [55] two years later.

Born in Homer, Louisiana, in September 1942, James Rheuben Andrews was a four-sport athlete growing up.  He earned a scholarship to LSU, where he won the Southeast Conference pole vaulting championship.  When his father died of lung cancer during his sophomore year,  Andrews gave up pole vaulting in order to accelerate his studies and graduate in three years.  Wanting to practice medicine, he needed to get a jump on medical school and earn money to support his family.  After graduating from LSU’s School of Medicine, Andrews completed his residency at Tulane.  In 1973, Andrews moved to Columbus, Georgia, and joined Dr. Jack Hughston, who was Auburn’s longtime team doctor. Sports medicine did not exist when James Andrews graduated medical school.  Open surgeries – like those that prematurely forced the end of Gale Sayers’ career, were commonplace.  A new approach – arthroscopy – began to emerge in the 1970s.  “The arthroscope revolutionized sports medicine,” said surgical device guru, Peter Koch, “and Dr. Andrews was at the forefront of arthroscopy.”  Using a telescope affixed to a video camera, arthroscopy allows surgeons to operate through small  tubes not much larger than a straw, minimizing tissue trauma and reducing healing time.  It allows patients to resume normal activities more quickly and athletes to return to the field faster. In 1985, a young pitcher named Roger Clemens was experiencing shoulder pain that was knocking a few miles per hour off his fastball.  Despite the insistence from Red Sox team doctors that he could pitch through it, Clemens’ agent, Randy Hendricks, insisted on getting a second opinion and sent him to see Andrews, who was at the forefront of minimally invasive surgery.  Andrews diagnosed and repaired a tear of Clemens’ labrum.  The following season, the right-hander became the first pitcher in history to strike out 20 batters in a game, was named AL MVP and earned the first of a record seven Cy Young Awards.  Clemens repaid his surgeon tenfold by becoming a walking business card for Andrews’ practice, and stars like Brett Favre and Tiger Woods soon followed. After suffering a complete tear of the labrum and rotator cuff in his throwing shoulder in the last game of the 2005 season, the San Diego Chargers released quarterback Drew Brees.  The 26-year-old Brees had his shoulder reconstructed by Dr. Andrews, then signed with the New Orleans Saints and was named First-team All-Pro in 2006.  Two seasons later, Brees guided the Saints to the only Super Bowl title in franchise history.  Since having his shoulder rebuilt by Andrews, Drew Brees has thrown for over 53,000 yards and has led the NFL in passing seven times.

On Christmas Eve 2011, Adrian Peterson injured his left leg during a run against the Washington Redskins and had to be helped off the field.  Five days later, Dr. James Andrews surgically repaired Peterson’s torn ACL and MCL.  It is an injury some backs never return from and, if they do, it’s at least a year before they are 100 percent.  Following a grueling rehab, Peterson was in the Minnesota Vikings starting lineup a little over eight months later.  In the most remarkable ACL comeback in NFL history, the 27-year-old future hall-of-famer led the league in rushing, falling just eight yards shy of Eric Dickerson’s single-season record.  Peterson was named 2012 Comeback Player of the Year, Offensive Player of the Year, and NFL MVP.

Andrews has only one speed:  all out.  At 74, he shows no signs of slowing down.  Andrews works Monday through Thursday in Birmingham, then spends Fridays at his Pensacola clinic.  During football season, he works two games on Saturdays [Auburn and Alabama], then covers the Redskins game on Sundays.  Andrews takes a week off before the start of football season – the first week of August – then a week between Christmas and New Year’s Day.  One of his axioms is availability.  In 1991, he worked the Sugar Bowl in New Orleans one night, hopped a flight to Dallas to operate on Troy Aikman’s shoulder and elbow the next morning, then flew back to Birmingham for his regularly scheduled surgeries for the rest of the day.  Although his allegiance is to Auburn – he wears a 2013 SEC Championship ring on his right hand – the Iron Bowl [the annual Auburn – Alabama game] is especially hard for him.  “I hope it’s rainy and cold so I can put on a hood and walk sideline to sideline and nobody will know who I am.”

Dr. Andrews not only repairs sports injuries, he seeks to prevent them.  He has authored Any Given Monday, a book about preventing and treating injuries in youth sports, and regularly lectures on the subject.  His American Sports Medicine Institute, a non-profit organization dedicated to improve the understanding, prevention and treatment of sports-related injuries through research and education, lobbied Little League of America for pitch count limits, which it adopted in 2007.  Andrews is against specialization – playing one sport year-round and never allowing time for recovery.  “The body needs three to four months off each year from a specific sport to recover,” he says.  Dr. Andrews also opposes professionalism, believing youngsters should not be trained like pro athletes when their still-developing bodies are too vulnerable to take that kind of heavy training.

Nearly as famous as the patients he treats, Dr. James Andrews has an estimated net worth of over $ 100 million.  Despite the fame and fortune, he is first and foremost about providing quality care.  “He treated me like a son,” said Bo Jackson, who stayed at Andrews’ home while undergoing hip replacement surgery in 1992 and remains a close friend.  Andrews is especially revered in his home state, where he employs a policy of treating any athlete from anywhere in Alabama – anybody –  at his clinic, health insurance be damned.