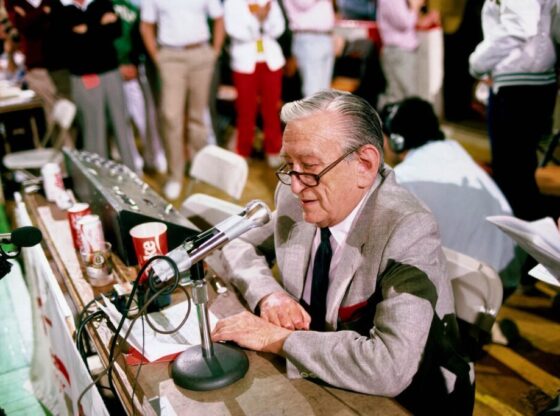 Johnny Most made some of the most famous radio calls in basketball history.

The raspy voice of the NBA’s Boston Celtics from 1953 to 1990, Most is best remembered for his excited call of “Havlicek stole the ball!” during the waning moments of Game 7 of the 1965 NBA Eastern Division Finals.  Johnny Most – irascible, loyal, prejudiced and wonderful – broadcast basketball games with a bark, husky and urgent, delivered in a rat-a-tat style from the back of his throat.  He disparaged opposing players, refs, and anyone who rooted against the Celtics — especially loud-mouthed patrons from Philadelphia.

Most was a throwback to another era.  The world’s best embellisher, he maintained a green-tinged view of reality.  Refs pampered the opposition while the Celts always got mugged.  Through a gravelly voice and hacking cough, Most colored all Celtics players as paragons of virtue, while opponents wore black hats. Like Al McCoy and Chick Hearn, Johnny Most was a radio legend.  Hearn sat courtside for Lakers games for 35 years, while Most called Celtics games for 37 seasons.  Meanwhile, the 86-year-old McCoy is still going strong for the Phoenix Suns after 47 years.

“Hi there once again, this is Johnny Most high above courtside here at the Boston Garden, where the Boston Celtics are getting set to do basketball battle.”

For his entire adult life Johnny Most was a two-pack-a-day cigarette man.  “According to the Surgeon General,” he joked in 1985, “I’ve been dead since 1955.”  His preparation was spartan.  For more than 2,800 games, he needed nothing more than a program insert, cigarettes, four cups of coffee and “vapor-action” throat lozenges.  His calls were unique: players would “Fiddle and diddle,” then “Stop and pop,” while the big men would get into “Muscle tussles” in the paint.

Down 110-109 with five seconds to go in Game 7 of the 1965 Eastern Conference championship, Philadelphia 76ers guard Hal Greer was inbounding the ball under his own basket with a chance to take the lead.  Greer tried to toss a high lob to forward Chet Walker when his pass was deflected by Boston forward John Havlicek.  Johnny Most’s call of the play is the most famous and imitated call in basketball history.  “Greer is putting the ball into play.  He gets it out deep.”  Then, as Most’s gravelly voice rises into a frenzy, “Havlicek steals it.  Over to Sam Jones.  Havlicek stole the ball!!  It’s all over!  Johnny Havlicek stole the ball!”

Revered in Boston, Most was an outspoken homer who believed every Celtic player was without sin but wasn’t shy about criticizing opposing players or fans.  In 1985, he dubbed Earvin Johnson “Crybaby Johnson” after the Lakers guard successfully challenged a referee’s call.  He kept it up for the rest of the decade, making calls like “Cry with the no-look pass!” and “Crybaby with the rebound.”  And the Celtics announcer did not limit his remarks to the hated Lakers.  He nicknamed burly Washington Bullets forwards Rick Mahorn and Jeff Ruland as “McFilthy” and “McNasty,” interchanging the two as he wished.  Most was extremely critical of the “Bad Boys” Detroit Pistons of the late 1980s, dubbing center Bill Laimbeer “Big Baby” and guard Isiah Thomas “Little Lord Fauntleroy.”

Along with the shamrock, parquet floor, and Red Auerbach’s victory cigar, Johnny Most was the endearing symbol of the Boston Celtics.

Most attended Brooklyn College, where he was later inducted into the school’s Hall of Fame for his prowess in both football and basketball.  Following college, Most fought in World War II.  As an aerial gunner on a B-24 Liberator, he flew 28 combat missions with the 15th Air Force, earning seven medals.

Johnny Most began his announcing career as a protégé of Marty Glickman announcing New York Knicks basketball.  He also had pre- and post-game radio shows for the New York Yankees, the baseball and football Giants and the Brooklyn Dodgers.  In 1953, Most was hired by Celtics owner Walter Brown to replace Curt Gowdy as the team’s radio play-by-play man.

From 1963 to 1966, Most worked as track announcer calling NASCAR at the Norwood Arena Speedway.  In 1965, he served as color commentator for one Boston Bruins game when the lead man was sick and regular color analyst Bob Wilson filled in on play-by-play.  In the summer of 1978, Most called greyhound races in Plainfield, Connecticut.  Between 1958 and 1972, he hosted the Red Sox post-game show on radio.

In Game 5 of the 1987 Eastern Conference Finals against Detroit, the Pistons had a 107-106 lead with five seconds left.  All Detroit needed was to inbound the ball to secure the victory and take a 3-2 lead as the series returned to Motown for Game 6.  Isiah Thomas was inbounding the ball to Bill Laimbeer, who was in the backcourt.  “Now there’s a steal by Bird!  Underneath to DJ, he lays it in!  Right at one second left!!  WHAT A PLAY BY BIRD!”

Bob Ryan of The Boston Globe once said the only thing worse than having heard Johnny Most is never having heard him.

In October 1990, Most announced his retirement, due to failing health.  Two months later, the Celtics honored him by permanently installing his personal microphone – silver-plated and encased in a Celtic-green frame – near his perch high above courtside at Boston Garden.  Johnny Most died of a heart attack on Cape Cod January 3, 1993.  He was 69.

Shortly after his death, Mr. Most posthumously received the prestigious Curt Gowdy Media Award for his on-air contributions to basketball.  Presented by the Naismith Basketball Hall of Fame, the award is presented annually to an outstanding basketball broadcaster or writer.  Past recipients include Al McCoy, Chick Hearn, and Marty Glickman.