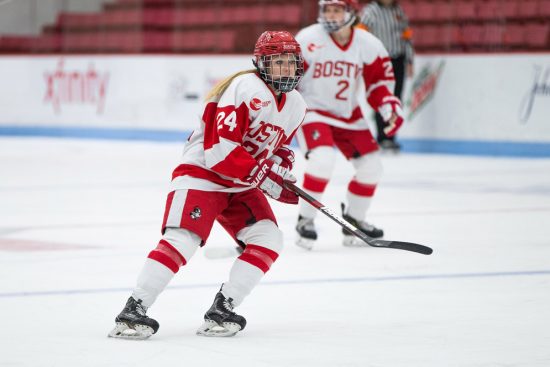 The Beanpot Tournament is the Civil War of college ice hockey.

The Beanpot is Boston’s social event of the winter season.  The first two Monday nights of February are reserved for the Beanpot, an annual hockey tournament that features four of the area’s preeminent colleges: Boston College, Boston University, Harvard and Northeastern University.  There are 54 institutions of higher education in metropolitan Boston – the highest concentration of any city in America.  The four schools that compete in the Beanpot are neighbors located less than four miles apart.  Ice hockey is the cornerstone sport of the Bay State, and the Boston area is the hotbed of American hockey.  Boston College has won five NCAA championships and has played in 12 of the last 20 Frozen Fours.  Boston University also owns five NCAA titles, while Harvard claimed the crown in 1989.

It all started December 26, 1952, at the old Boston Arena [now Matthews Arena, home ice for Northeastern]. Originally scheduled as a “filler” to help the arena on off nights, the Beanpot was played on the first two evenings after Christmas.  The following year, the tourney was moved to Boston Garden, where it remained through 1995.  The Beanpot was moved to its current home in 1996, when TD Garden was built on the former site of the Boston Garden.  When the puck dropped to open play at the inaugural Beanpot,  Harry S. Truman was in his final days in the White House, the Celtics were beginning their seventh season in the NBA, Ted Williams had just been called to serve in the Korean War, and the Patriots did not yet exist.  Since then, the Beanpot has grown in stature and popularity.  In 1958, it was moved to the first two Mondays in February.  Three years later, it drew its first sellout.  The inaugural event, won by Harvard over BU in the final, 7-4, garnered 5,105 spectators.  More than 17,500 attended the 2017 tournament, which has sold out every year since 1978.

The Blizzard of 1978 has become part of Beanpot lore, as the historic nor’easter dumped over two feet of snow on Boston during the night of the first round games that winter.  The record-breaking snow trapped hundreds inside Boston Garden and the championship and consolation games were moved from Monday, February 13 to Wednesday, March 1.

There is no other college hockey tournament like the Beanpot, with its history, intensity and proximity of the participants.  The Great Lakes Invitational, held annually since 1965, features four Michigan teams but does not match the Beanpot’s ferocity or quality of play.  The annual summit of Boston’s four powers is the official battle for the city’s hockey bragging rights.  A meeting of neighborhood friends and old rivals, of off-season training partners and summer league teammates, the Beanpot breeds fierce competition.  According to former BU coach Jack Parker, it is “a tournament of friendships and rivalries, but not necessarily friendly rivalries.”  Parker should know, having won three straight Beanpots while playing for BU in the mid-1960s and later guiding the Terriers to 21 Beanpot titles as coach.  “It’s for the ultimate bragging rights,” said Harvard co-captain Devin Tringale, who grew up in nearby Medford.  Players may have friends on the other squads, but “all four teams hate each other,” according to former BC captain Teddy Doherty, who grew up in Hopkinton, Massachusetts.  “When the Beanpot comes around, you’re not friends anymore.”

For the players, the first two Mondays in February bring an opportunity to create lifelong memories while renewing bonds, as well as grudges.  Bitter rivalries may have been forged as children – or as recently as last summer in the gym.  “It’s hard to understand until you experience it for yourself,” says Northeastern captain John Stevens, who is from the Jersey Shore.  Rosters are full of New Englanders – players who have competed with, and against, one another on high school, club or national teams.  BU, Boston College and Northeastern are all members of the Hockey East conference and all play one another twice a year outside the Beanpot.  Harvard belongs to the 12-team East College Athletic Conference and regularly faces the other three schools in the NCAA tournament.

In addition to being able to lay claim as the best college hockey team in Boston, the tournament winner receives the storied Beanpot Trophy.  Originally a humble ceramic jug, the trophy is now made of metal and is mounted onto two rings that contain the names of past champions.  Legendary BC coach Jerry York refers to the beginning of February as “Trophy Season,” with the Beanpot being the first of three trophies [the others being Hockey East and NCAA] he hopes the Eagles will hoist each year.  Beanpot participants have never gone on to claim an NCAA title without first winning the Beanpot Trophy.  Of the ten NCAA hockey championships won by BU, BC and Harvard since 1952, each season included a Beanpot title.

Located along the Charles River near Boston’s Fenway-Kenmore neighborhood, Boston University has the most Beanpot titles, with 30.  With 51 appearances in the finals, Terrier fans have come to call the Beanpot the “BU Invitational.”  Boston College controlled the early years of the Beanpot, winning eight of the first 13 tournaments.  The Eagles won six titles in seven years between 2010 and 2016, including five in a row.  Located in Chestnut Hill, just over three miles west of Boston University’s campus, BC and BU are fierce rivals.  Every championship game to date has featured either Boston College or Boston University, or both.  Harvard and Northeastern have never met in the Beanpot final.  Located across the Charles River in Cambridge, Harvard has played in 25 finals and won 11, including the 2017 Beanpot, their first title since 1993.  Northeastern is the only of the four Beanpot schools without an NCAA hockey championship.  Situated in the Fenway Cultural District, the Huskies play where it all started – Matthews Arena, the world’s oldest surviving indoor hockey rink.  Northeastern failed to win a Beanpot until 1980, when Wayne Turner’s wrist-shot found the back of the net in overtime – the Shot Heard Round the Beanpot – to give the Huskies their first of four Beanpot titles.  It remains the most important goal and greatest sports moment in NU history.   Northeastern has not won the Beanpot since 1988, the longest drought among the quartet.

The Beanpot has featured some of the best players in U.S. hockey history, including Bill Cleary, who starred with his brother Bob for the 1960 USA Olympic gold medal -winning team in Lake Tahoe.  An All-American who still holds several Harvard records, Cleary owns Beanpot records for most goals in a game, with five, and most goals in a period, with four.  Cleary went on to coach the Crimson for two decades before serving as the school’s athletic director until 2001.  Joe Cavanaugh, a forward for Harvard from 1969 to 1971, is the tournament’s all-time scoring leader.  “Super Joe” tallied 19 points on seven goals and a dozen assists in only six career games [freshmen were ineligible at that time].  He was tournament MVP in 1969 and was inducted into the USA Hockey Hall of Fame in 1994.  The Beanpot features two players who have twice been named tournament MVP.  Boston College forward John Cuniff did it in 1964 and again in 1965, and Boston University’s Sean Fields earned the honor in both 2003 and 2004.

The Eberly Award is presented annually to the goalie with the best save percentage during the Beanpot tournament.  First presented in 1974, the award is named after former Beanpot goaltenders Glen and Dan Eberly, who played for BU and NU, respectively.  BU netminder, Scott Cashman, is the only three-time Eberly Award winner.  Cashman led BU to three Beanpot titles and amassed a 5-1 record and .902 save percentage between 1990 and 1993.  In 2007, BU goaltender, John Curry, posted a Beanpot-best save percentage of .985.  Curry turned away 64 shots while allowing only one goal to post a tournament-record goals-against average of 0.48.  In 2014, Harvard goalie Steve Michalek collected 87 saves during the tournament, most of all time.  He rejected 63 shots against Boston University in the final, a heartbreaking 4-3 loss in double overtime.