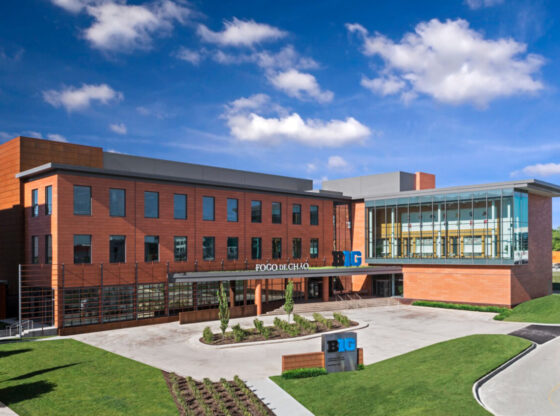 The Big Ten is the oldest Division I collegiate athletic conference in the United States.

On January 11, 1895, then-Purdue University president, James H. Smart, led a meeting of university leaders at the Palmer House Hotel in Chicago to discuss the regulation of intercollegiate athletics.  Included were the presidents of the University of Chicago, Minnesota, Illinois, Wisconsin, Northwestern and Lake Forest College.  Thirteen months later, the group reconvened to found the Intercollegiate Conference of Faculty Representatives, which came to be known as the Western Conference.  Lake Forest College opted not to join and was replaced by the University of Michigan.

Indiana and Iowa became the eighth and ninth members of the Western Conference in 1899 and the league was dubbed the Big Nine.  In an early display of the elitism that has come to define them, Michigan began looking for greener pastures and withdrew from the conference in 1908.  When Ohio State joined the league in 1912, the membership total was brought back to nine.  Following a decade of unsuccessfully meandering about as an independent, Michigan returned in 1917 and the conference was referred to as the Big Ten for the first time.

Purdue has been a member of the Big 10 Conference since its inception, yet the Boilermakers have claimed only three NCAA titles – two of which came in women’s basketball and women’s golf.

After nearly three decades with ten members, the conference consolidated to nine schools when the University of Chicago de-emphasized varsity athletics after World War II and withdrew in 1946.  Michigan State was added to the Big Ten three years later, bringing league total to ten once again.  The conference’s membership would remain unchanged for the next 40 years.

Headquartered in suburban Chicago, the Big Ten predates the NCAA by a decade.  It is a conference comprised predominantly of major flagship research universities with strong financial endowments and academic reputations.  Highly regarded Northwestern University is the only private school in the 14-member league.  With just over 21,000 students, NU is also the only Big Ten school with an enrollment of under 30,000.  Today, the Big Ten sponsors 28 official sports – 14 for men and 14 for women.  Including club programs, Big 10 schools compete in 42 different sports, more than any conference in the land.

The Big Ten has long been at the forefront of college athletics.  It was the first league to employ revenue sharing among its member schools and pioneered the use of instant replay in college football.  Conference programs have combined to win more than 450 team and 1,800 individual championships, and more fans have attended Big Ten football games than any other circuit in the NCAA.

But the Big Ten may be losing its toehold as the greatest conference in the nation.

I was born and raised in America’s Heartland.  I attended high school near the banks of Lake Michigan and come from a Big Ten family.  My wife and I graduated from Indiana University, as did our youngest son.  I have family members with degrees from Iowa, Northwestern, Purdue, Wisconsin and Illinois.  The Big Ten Conference is near and dear to my heart.  But what the league has done during the past decade is unforgivable – and has severely weakened its brand.

The Big Ten Conference established itself over 120 years ago as the preeminent collection of institutions in the nation, where the pursuit of academic excellence prevailed as the definitive goal.  Sadly, those ideals have been compromised, as today’s Big Ten – like much of the landscape of college athletics – is driven by profit and greed.  Once a league of premiere institutions situated contiguously in the Upper Midwest, the Big Ten has strayed from its original identity.  The addition of Nebraska — the only institution in the Big Ten that is not a member of the Association of American Universities — lowered the league’s academic reputation.  And the addition of Rutgers and Maryland was just plain wrong.

“Very candidly, I think we made a mistake.”  — former Ohio State president Gordon Gee, on the Big Ten’s decision to include Rutgers and Maryland.

The “Big Ten” moniker is misleading.  In 1990, Penn State became the 11th member of the conference.  After Nebraska joined in 2010 [making it the NCAA’s second “Big 12”], the league announced that it would not expand further, stating the “process has reached its natural conclusion.”  But just two years later, Rutgers and Maryland accepted invitations to become the 13th and 14th members of the conference.  So why continue to call it the Big Ten?  Because the name is rich in tradition – the Big 10 is the conference of Jesse Owens, Ohio State-Michigan, Mark Spitz and Magic Johnson.  Problem is, the league abandoned tradition when it expanded twice within two years at the beginning of this decade.

The Big Ten’s expansion was motivated entirely by money — on the part of both the league and the schools involved.  Once Nebraska was added as the 12th member, the conference was able to create two divisions and add a financially lucrative conference title game in football.  In the 2010-11 academic year, Rutgers’ athletic department lost nearly $27 million.  Saddled with a $4 million deficit, Maryland dropped seven varsity teams in July 2012.  The Big Ten bailed them out.  The conference has long employed a policy of sharing all media rights, bowl payouts, and other profits – including proceeds from March Madness among all member institutions.  In 2017, these distributions averaged $37 million per school.

What did the Big Ten get out of the deal?  Cash.  And lots of it.  The Big 10 sold out.  Let’s face it, Rutgers has zero athletic pedigree.  The Scarlet Knights, who have been competing in varsity sports since 1869, have won a grand total of one NCAA championship [a tie for the Men’s Fencing title in 1949].  Situated along the eastern seaboard, Maryland – a charter member of the ACC —  is far more Tobacco Road than Heartland.  What’s more, Rutgers sits 800 miles east of the Big Ten’s epicenter in Chicago, while Maryland’s College Park campus is more than 11 hours from the league offices.  But both are in major markets: Rutgers in the New York Metro – the country’s largest — and Maryland in the D.C./Baltimore area.  Broadening the reach of the league-owned Big Ten Network into these markets gave the BTN 40 to 50 million additional viewers, putting nearly $10 million into the league’s coffers annually [the conference receives 88 cents per month for every BTN subscriber].

In 2018, the top three NCAA football home attendance leaders were Big Ten schools, and seven of the top 20 were from the conference.

There’s more.  The Big Ten has taken to adding “partners” – not members – to the league.  In 2013, Johns Hopkins University, which competes in Division III except in lacrosse, joined as men’s and women’s lacrosse partners.  Three years later, the Big Ten announced Notre Dame had joined as a men’s hockey partner for the 2017-18 season.  Ironically, Notre Dame’s faculty senate almost unanimously endorsed joining the Big Ten in 1999, but wanted to remain an independent in football and cherry pick which sports it wanted to participate in as a Big 10 member.  When the Big Ten insisted upon a full membership with no special exemptions, ND’s board of trustees decided against joining the conference.

Despite its imperfections, the Big 10 continues to prosper.  The conference has produced 41 national champions in football.  The league has claimed ten NCAA men’s basketball titles and, in 1976, sent two teams to the final, where Indiana capped college basketball’s last perfect season with an 86-68 victory over Michigan.  Paced by Illinois’ ten crowns, the Big 10 has produced 25 national titles in men’s gymnastics, while ice hockey has garnered 23 NCAA titles.  Boasting 37 national championships, the Big Ten Conference is a wrestling powerhouse.  Iowa leads the way with 23 titles, while Penn State has claimed eight of the last nine March Matness team crowns.

Today is the first day on the job for new Big Ten commissioner Kevin Warren.  The 55-year-old Warren spent his freshman year at Penn, where he helped the Quakers to the 1982 Ivy League basketball title.  He then returned to his hometown of Phoenix, where he played two more years at Grand Canyon University.  After earning an MBA from Arizona State, Warren obtained a law degree from the University of Notre Dame.  Prior to becoming just the sixth commissioner in Big Ten history, Warren served as C.O.O. of the Minnesota Vikings, where he was the highest-ranking African-American working on the business side of the NFL.  Mr. Warren replaces Jim Delaney, who served as Big Ten commissioner for 30 years.  Curiously, Delaney is set to earn bonus payments of $20 million for overseeing a non-profit institution [the Big Ten] that relies on free labor.