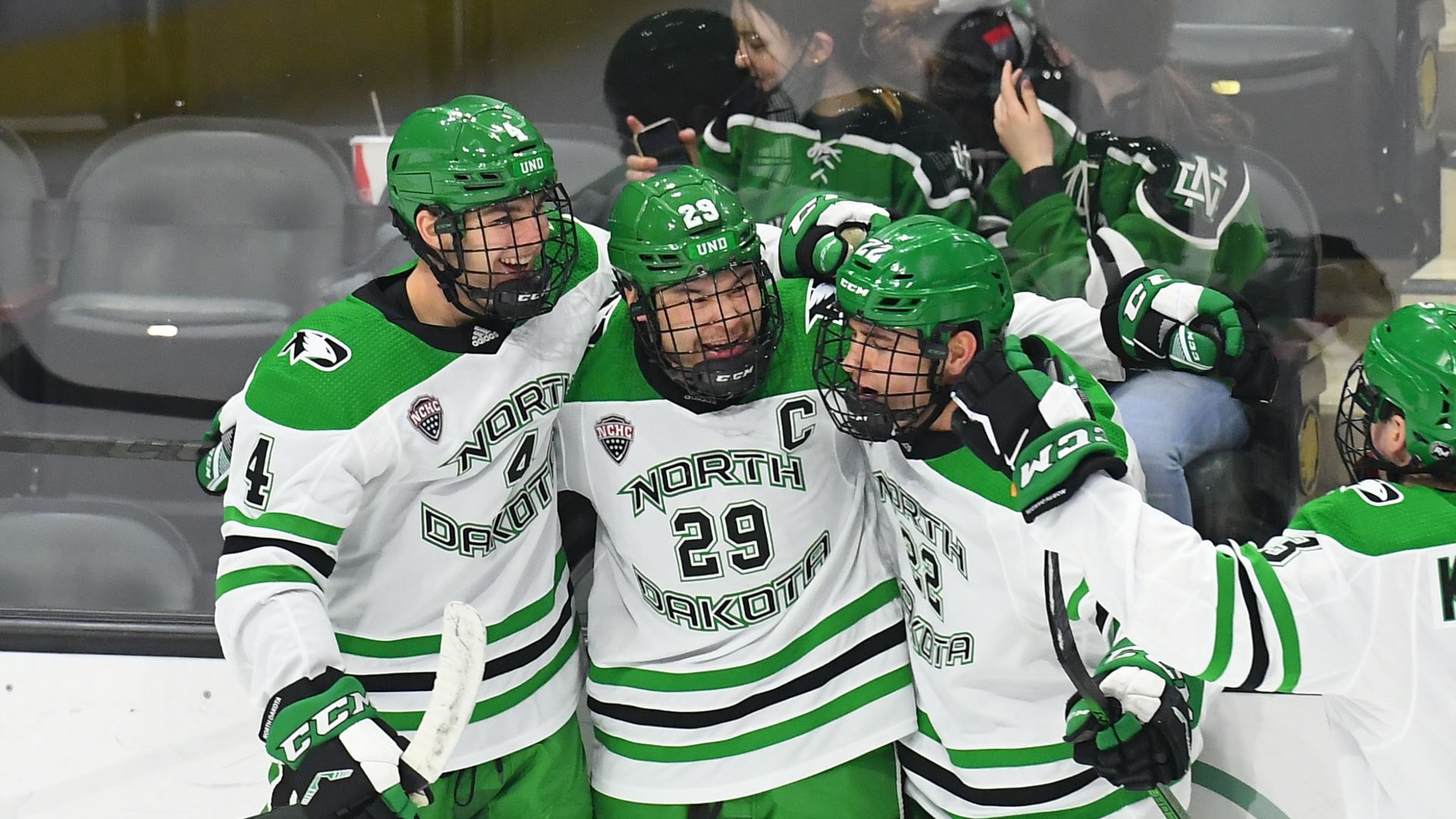 The University of North Dakota has one of the premier college hockey programs in the country.

While the Fighting Sioux won the Division II national football championship in 2001 and was runner-up in 2003, and the women’s basketball team won three straight national championships between 1997 and 1999, North Dakota is a hockey school.  With eight national championships and five runner-up finishes, UND is one of the most powerful and successful hockey programs in NCAA history.  The Fighting Hawks [the school was forced into a name change in 2015, but more on that later] have won 17 conference titles, made 32 NCAA tournament appearances and reached 22 Frozen Fours.

UND is a public research university located in Grand Forks, in the northeastern portion of the state, bordering Minnesota.  Established in 1883 – six years before North Dakota joined the Union – it is the state’s oldest and largest school.  The 521-acre campus is made up of 240 buildings that are divided by the meandering English coulee,  With an enrollment of more than 11,000 undergraduates and offering 224 fields of study, the university landed on the 2018 U.S News & World Report’s list of Top 25 Most Innovative Schools.  Notable UND alumni include author and essayist Chuck Klosterman [‘94], former Minnesota Vikings running back Dave Osborn [‘65], former NBA player and coach Phil Jackson [‘67] and Dave Christian [‘81], a defenseman on the gold medal winning 1980 U.S. Olympic hockey team.

One of the most storied programs in college hockey history, the UND program began in 1929 as an independent.  The club disbanded four years later during the heart of the Great Depression, then resumed following World War II.  One of the founding members of the Midwest Collegiate Hockey League in 1951, UND returned to a independent status in 1958 after several MCHL schools were put on probation for recruiting ineligible players from Canada.  The Fighting Sioux won their first NCAA title in 1959, when head coach Bob May guided them to a 4-3 overtime victory over Michigan State.

The North Dakota hockey program has had 16 head coaches.  Six, including current head coach Brad Berry, are former UND players.  Four coaches have won over 100 games at UND.  The winningest is Gino Gasparini, who played for the Kelly Green and White in the mid-1960s and went 392-248-24 in 16 seasons between 1978 and 1994.  Dean Blais followed Gasparini.  In a decade in Grand Forks, Blais compiled a record .733 career winning percentage and delivered two national championships.  Current Philadelphia Flyers head coach Dave Hakstol played for UND, then took over the program from Blais in 2004.  Coach Hakstol took the Hawks to seven Frozen Four appearances in 11 years.  Berry, who replaced Hakstol in 2015 and is currently in his fourth season, won UND’s eighth national title in his first year behind the bench.

The 25-man UND hockey roster is comprised mostly of players from the upper Midwest and Canada.  A ten-person support staff, including four coaches, assists the team through a 37-game regular season.  The 2018-19 campaign got underway October 6 and will end in early March.  Games are scheduled for back-to-back nights — usually Friday and Saturday — against the same opponent.  UND plays in the eight-member National Collegiate Hockey Conference, whose 2018 tournament runs from March 15 to March 23.  The NCHA tourney is followed by the NCAA regionals the last weekend in March.  The season concludes with the Frozen Four in Buffalo April 11-13, 2019.

Offering an excellent education and opportunity to play at the next level, North Dakota attracts some of the best players in the world.  More than 300 have gone on to play professionally, including 100 who have skated in the NHL.  Alumni include Ed Belfour, who won two Stanley Cups and two Vezina Trophies as the league’s top goaltender in 18 NHL seasons, and defenseman Matt Greene, who helped the L.A. Kings win two Stanley Cups.  Zach Parise, Travis Zajac and Brock Boeser all played for UND.  The 2006 Fighting Sioux featured seven future NHL players, including Jonathan Toews, who captained the Chicago Blackhawks to three Stanley Cup titles.

While the vast majority of NHL players forgo college hockey in order to hone their skills in the minor leagues, 20 former North Dakota players have been selected in the first round of the NHL draft.  Seventeen players, including Shane Gersich in 2018, played for UND and in the NHL in the same season.  A former UND player has been on the Stanley Cup-winning team in seven of the past nine seasons, including 2018, when T.J. Oshie and Gersich had their names engraved on the Cup as members of the Washington Capitals.  A dozen UND alums competed in the 2018 Stanley Cup playoffs, and Hakstol was behind the Philadelphia Flyers bench during the tournament.

The NCAA – along with the International Olympic Committee and FIFA – is one of the three most corrupt agencies in sports.  A money-grabbing institution of double standards, the NCAA often sticks its nose where it has no business.  In the late 1990s, college athletics’ governing body began applying unjust pressure on its member institutions to eliminate use of Native American nicknames or logos they deemed to be “hostile and abusive.”  Several schools, including Illinois and Bradley, kept their names but changed their mascots.  North Dakota did neither: they fought to keep their iconic brand.

In December 1998, former Fighting Sioux hockey player and wealthy alumnus Ralph Engelstad donated $100 million for the construction of a new hockey arena on the UNC campus.  The building was almost never completed.  Midway through construction, Engelstad  — whose donation was contingent on the university keeping the Fighting Sioux name – threatened to withdraw funding when the school began discussions about removing the name.  A contentious battle ensued.  Alumni and the people of North Dakota were outraged.  Even the Spirit Lake Sioux Tribe got involved, suing the NCAA for the right to keep the name and American Indian imagery.  Following Engelstad’s death and a protracted and costly legal battle, the university – and North Dakota voters – succumbed to the pressure.  In 2015, UNC officially changed their fierce and noble Fighting Sioux name and logo to the insipid – but politically correct – Fighting Hawks.

The UND hockey club has had three homes during its eight decades of existence.  The Fighting Sioux played in the Old Barn until 1972, when they moved into the Old Ralph Engelstad Arena – “The Ralph.”  In 2001, North Dakota moved into their new home, the 11,643-seat Ralph Engelstad Arena.  Better known as the “REA,” the state-of-the-art building is an ice hockey showcase.

With eight national championships, the University of North Dakota is second only to Michigan for most all-time titles.  The Wolverines have won nine, the last coming in 1998.  Seven of Michigan’s NCAA championships came before 1965, when only four teams qualified for the tournament.  Today, 16 teams get invited.  UND owns a stellar record in head-to-head competition.  The Fighting Hawks hold all-time win advantages over college hockey powerhouses Harvard, Boston College, Denver, Boston University and Minnesota-Duluth.  Among programs that UND has faced more than once, only Wisconsin, Minnesota and Michigan have a better head-to-head record than UND.

UND had produced two Hobey Baker Award winners.  Center Tony Hrkac was named college hockey’s best player in 1987, while winger Ryan Duncan garnered the honor in 2007.  Duncan is tied with Chris Porter for most career games [175] wearing the Kelly Green and White sweater.  The great Ben Cherski, who skated for the Fighting Sioux in the early 1950s, is the school’s all-time goal scoring leader, finding the back of the net a record 131 times.  Greg Johnson, who played center at UND before playing 14 NHL seasons, has scored more points [272] and handed out more assists [198] than any skater in North Dakota history.

On this date in 2015, UND beat Wisconsin, 3-1, to run their season record to 8-1-2.  The Fighting Hawks would go on to win the 2016 Frozen Four and secure their eighth national championship.