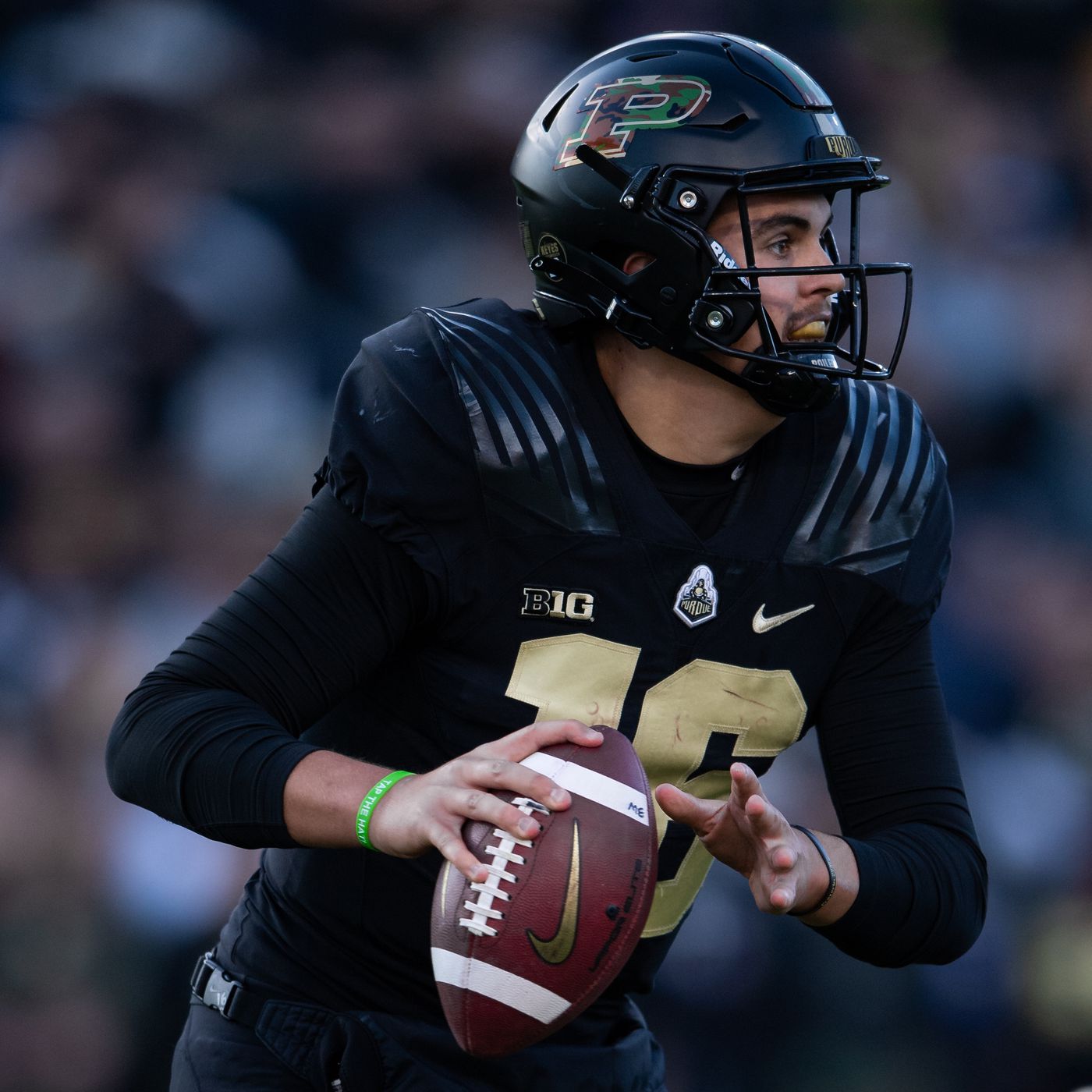 No college can match Purdue University’s tradition of turning out top-flight quarterbacks.  Famous not just for producing astronauts, developing superior strains of turf grass, and showcasing the world’s largest drum, Purdue grooms signal-callers.  The Cradle of Quarterbacks is a defining feature of Purdue football.  Boilermakers have set several NCAA and Big Ten records, and many have been selected as All-Americans.  Three are in the College Football Hall of Fame [Bob Griese, Mike Phipps, Mark Herrmann] and two [Griese and Len Dawson] have been enshrined in Canton as members of the Pro Football Hall of Fame.

In honor of Drew Brees, who 20 years ago this month threw for 1,016 in a two-week stretch [including an NCAA record 55 of 83 against Wisconsin], here are the best quarterbacks ever to pilot the Black and Old Gold.

Drew Brees [1997-2000] is the greatest quarterback ever to come out of Purdue.  Recipient of the 2000 Maxwell Award as the best all-around player in the land, Brees remains the Big Ten record-holder in virtually every passing category.  Winner of the Silver Football as the Big Ten MVP, Brees led the Boilermakers to their first Big Ten title and Rose Bowl appearance in over three decades.  The most accurate passer in NFL history, Brees guided the New Orleans Saints to their only Super Bowl title while being named MVP of Super Bowl XLIV.

A Boilermaker legend, Bob Griese [1964-66} was voted the All-Time QB for the first 100 years of Purdue football, in 1987.  He led the Black and Old Gold to an upset of top-ranked Notre Dame in his junior season and a win over USC in the school’s first-ever Rose Bowl appearance, as a senior.  Handling PU’s punting, placekicking and quarterbacking duties, this Evansville native was a two-time All-American and team MVP.  After finishing as Heisman Trophy runner-up in 1966, Griese entered the NFL, where he led the Miami Dolphins to three AFC championships, two Super Bowl titles, and the only perfect season [17-0 in 1972] in NFL history.

Len Dawson [1954-56] led the Big Ten in passing three straight years, and graduated with school records for passing yards and touchdowns.  While in West Lafayette, the Golden Boy met Hank Stram, then a Purdue assistant coach.  With Dawson at the helm, Stram designed the “Offense of the 1970s” that won three AFL titles and Super Bowl IV with the Kansas City Chiefs.  Len Dawson landed in the Pro Football Hall of Fame in 1987.

The first quarterback to beat Notre Dame three straight years – each while the Irish were ranked in  the Top Ten in the nation — Mike Phipps [1967-69] set school records for passing yards and touchdowns.  In 1968, Phipps led Purdue to a No. 1 ranking, earned Big Ten MVP honors and finished runner-up in Heisman Trophy voting.  Named a Rhodes Scholar as a senior, Phipps passed on the chance to study at Oxford in order to play pro football, quarterbacking the Cleveland Browns and Chicago Bears for a dozen seasons.  Mike Phipps entered the College Football Hall of Fame in 2006.

Mark Herrmann [1977-80] set NCAA career records for passing attempts, completions and yards, as well as total offense.  Tall, mobile and smart, the rocket-armed Herrmann was the first quarterback in NCAA history to throw for over 8,000 yards.  He went on the be the first to surpass 9,000 passing yards.  One of three Purdue quarterbacks to start in three consecutive bowl games, Herrmann was inducted into the College Football Hall of Fame in 2010.

A prototypical pro-style passer, Gary Danielson [1970-72] was accurate and had a strong arm.  In 1971, he led the Big Ten in passing and orchestrated six of the league’s 11 longest plays of the season.  Following two years in the World Football League, Danielson played in over 100 NFL games with the Detroit Lions and Cleveland Browns.  Now one of the finest analysts in college football, Danielson threw five touchdown passes in a game against the Minnesota Vikings in 1978, still a Lions franchise record.

Jim Everett [1981-85] beat Notre Dame, Ohio State and Michigan in the same season, something no other Purdue quarterback has ever done.  A two-time team MVP, Everett set a school record with seven 300-yard passing games as a senior.  He led the NCAA in total offense in 1985 and was awarded the Big Ten Medal of Honor as the conference’s top student-athlete.  The Albuquerque native was the third overall pick of the 1986 NFL Draft and played a dozen pro seasons.  The Los Angeles Rams career leader in passing yards, Everett led the Rams to the 1989 NFC title game.

Dale Samuels [1950-52] is the first quarterback in school history to pass for over 1,000 yards in a season.  As a sophomore, he beat defending national champion Notre Dame, ending the Irish’s 39-game unbeaten streak.  As a senior, Samuels guided the Boilers to a Big Ten co-title.

Following Mark Herrmann as the pilot of the Purdue offense, Scott Campbell [1980-83] had big shoes to fill.  He succeeded brilliantly, graduating as the Big Ten’s second all-time leading passer [behind Herrmann].  A trusted leader, Campbell threw for 516 yards against Ohio State in 1981, and was Purdue’s MVP as a senior.

The first modern-day quarterback in Purdue history, Bob DeMoss set school records in every passing category.  The father of the Cradle of Quarterbacks, DeMoss went on to serve as Purdue’s head coach, recruiting and mentoring Samuels, Dawson, Griese, Phipps and Danielson.

Kyle Orton [2001-04] threw 63 touchdown passes as a Boilermaker, fourth-most in school history.  He started four straight bowl games, one of only a dozen quarterbacks in the annals of college football ever to do that.  Orton holds Purdue’s lowest career interception rate.  The 2002 Sun Bowl MVP played for five teams in ten NFL seasons.

In his first full season wearing the Black and Old Gold, Curtis Painter [2005-08] broke Drew Brees’ Big Ten record for single-season passing yards.  A PrepStar All-American from Vincennes, Indiana, Painter threw for 300 yards a dozen times, second only to Brees, who achieved that feat 16 times.  The 2007 Motor City Bowl MVP ranks second to Drew Brees in career completions and passing yards.  Painter went on to play for the Colts and Giants before retiring in 2013.