Roberto Duran is the greatest Lightweight in Boxing history 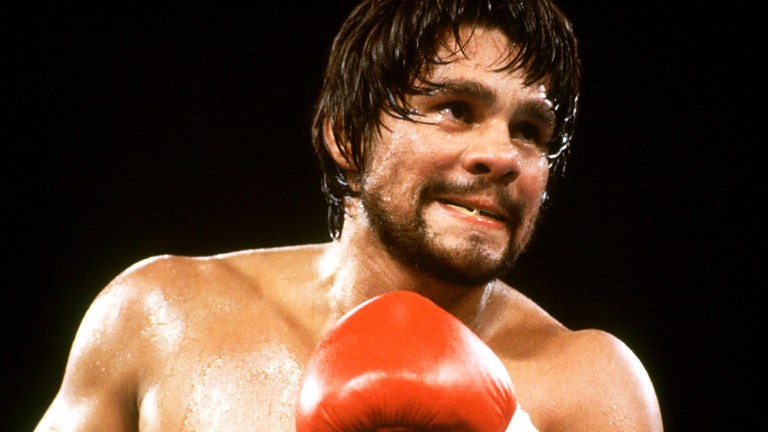 Roberto Duran is the greatest lightweight in boxing history.

He came from the streets.  He came from nothing.  He had to fight for survival.  A devastating puncher with excellent defensive skills, Roberto Duran emerged from the slums of Panama to become one of the fiercest fighters of all time.  One of the greatest pound-for-pound boxers ever to step into a ring, Duran won world championships in four weight classes.

Duran’s career was legendary, his accomplishments hard to believe.  After Jack Johnson [1878-1946], he became just the second boxer to compete in five decades.  Duran allegedly knocked down a mule with one punch at 14 and was 50 years old when he fought his last professional bout.  One of the 20th century’s greatest pugilists, he had a wicked left jab and could take a punch.

Nicknamed Manos de Piedra [Hands of Stone], Duran was fast, tenacious and powerful.  Having fought his way out of poverty, he entered the ring with a terrifying look in his eyes.  Duran was fearless and intimidated his opponents.  He was Mike Tyson before Mike Tyson came along.  At one point his record was 72-1, and he retired in 2002 with 103 career victories [70 by knockout].  He held world championships as a lightweight, welterweight, light middleweight and middleweight, as well as reigns as the undisputed and lineal lightweight champion and lineal welterweight champ.

Born in the El Chorrillo neighborhood of Panama City June 16, 1951, Roberto Duran Samaniego is the son of Panamanian mother and an American father of Mexican descent.  His father, Margarito, was stationed in Panama with the U.S. Army when Roberto was born but abandoned the family when the boy was five.  With no money, Duran was forced to shine shoes and sell newspapers rather than attend school.

He began boxing at eight.  In an era before Barbend, the youngster sparred with experienced fighters at the Neco de La Guardia gym in his hometown. Lean, hungry and poor, Duran compiled an amateur record of 13-3 before turning pro at 16.  On February 23, 1968, he earned his first victory with a unanimous decision over Carlos Mendoza.  Duran won his next 27 bouts to earn a shot at lightweight champion Ken Buchanan for the title in June 1972.  Before a sellout crowd at Madison Square Garden, Duran knocked the Scotsman to the canvas fifteen seconds into the fight, then held on to win by TKO in the 13th.

After suffering his first loss to Esteban de Jesus in a non-title fight in November 1972, Duran reeled off 35 straight wins, including a knockout of de Jesus in a rematch.  In February 1979, he vacated his Lightweight title to become a welterweight.  Following a handful of wins in tune-up bouts, the stage was set for Duran to challenge undefeated WBC welterweight champion, Sugar Ray Leonard.

Sugar Ray was America’s darling.  Handsome, charming and lightning-quick, the 1976 Olympic gold medal winner was the welterweight equivalent of Muhammed Ali.  The match was scheduled for June 1980 at Olympic Stadium in Montreal, where Leonard had captured gold four years earlier.  Dubbed The Brawl in Montreal, Duran, who entered the fight with a record of 71-1, was offered $1.5 million.  The 24-year-old Leonard was to receive six times that amount.

I am not an animal in my personal life.  But in the ring there is an animal inside me.  Sometimes it roars when the first bell rings. – Roberto Duran.

In Montreal, Duran took the fight to Leonard from the opening bell.  Cutting off the ring and denying the champion room to work, the Panamanian controlled the bout and was awarded a unanimous decision.  The boxing world was stunned by Duran’s victory and a rematch was scheduled for five months later, causing concern in Leonard’s camp.

Following the win in Montreal, Duran spent a lot of time partying and celebrating — but not a lot of time training.  He gained 40 pounds, forcing him to have to fast in the days before the fight in order to make the 147-pound limit.  The rematch took place November 25, 1980, at the Superdome in New Orleans.  Leonard used his superior speed and movement to outbox and confuse Duran.  In Round 7, the challenger began to taunt the champ, at one point winding up his right hand as if to throw a bolo punch then snapping off a left jab to Duran’s face.  In the closing seconds of the eighth round, Duran quit.  Humiliated, he turned his back to Leonard and waved his glove, saying to referee Octavo Meyran, “No mas” [“No more” in Spanish].  It ended one of the most iconic fights in boxing history and began the most defining moment of Duran’s life and career.

Once the poster child of Panama, the boxing idol was shunned and even ostracized in his home country following the second Leonard fight.  Duran took time off, then moved up in weight.  On his 32nd birthday, he claimed the super welterweight title from Davey Moore.  A year later, Duran was knocked out for the first time in his career, losing to Thomas Hearns in the second round.  He did not contend again until 1989, when the 37-year-old former lightweight decisioned Iran Barkley for the middleweight crown to earn his fourth career title.  It was one of Duran’s greatest achievements, but his reign was short-lived.  He moved up in weight again, lost a third clash with Leonard, and never regained his old form.

The No Mas moment overshadows everything else in Roberto Duran’s extraordinary career.

Whether it was for money, pride, adoration or a lack of other interests, Roberto Duran continued boxing until he was well past his prime.  From 1968 to 2001, he fought at least once a year except 1985.  Like many fighters, the Tasmanian Devil held on too long.  Half of his career losses came after he turned 40, including four of his last nine.  Following a 2001 car crash that required life-saving surgery, Duran finally retired at 50 with a career record of 103-16.

Generally considered the finest lightweight of all time, the Associated Press voted Duran the seventh-best fighter of the 20th century.  In 2002, he was chosen by The Ring magazine as the fifth greatest fighter of the last 80 years.  Mr. Duran was inducted into the World Boxing Hall of Fame in 2006 and the International Boxing Hall of Fame in 2007.

On this date in 1977, Roberto Duran earned a 15-round unanimous decision over Edwin Viruet at the Spectrum in Philadelphia.  Duran, who ran his record to 62-1, retained the WBA, The Ring, and lineal lightweight titles.