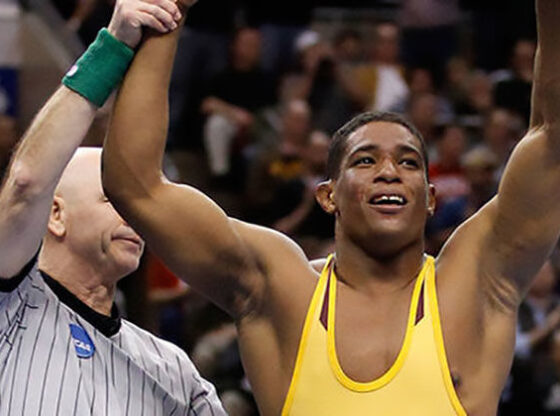 Wrestlers are notoriously tough, courageous and iron-willed. Anthony Marc Robles is all of these.

Born in La Mirada, California, on July 20, 1988, he entered the world by Caesarian section after his 16-year-old unwed mother experienced troubled labor. Robles is a congenital amputee—born with his right leg missing all the way to the hip. At age three, he was fitted with a prosthetic leg but refused to wear the heavy device and hid it behind a piece of furniture in his home. Always active, he shinnied up a 50 foot pole outside his house at age five and in sixth grade set a school record for most pushups. Nonetheless, Robles was stared at and taunted as a child, wanting desperately to fit in. At 14, the family moved to Mesa, Arizona. His mother, Judy, married his stepfather, Ron, when Anthony was two then had three children together. In eighth grade, Robles followed his older cousin to wrestling practice and quickly joined in, being used as a practice dummy. “Wrestling helped me come out of my shell. This is how God made me and I am going to make the most of it.”

Robles went out for the wrestling team at Mesa High School as a 90 pound freshman, giving away ten pounds and competing in the 100 pound weight class. He went 5-8 that year, with half his matches ending with Robles flat on his back, and he was ranked last in the city of Mesa, an area not known for great wrestling. Determined to improve, Robles asked teammate Chris Freije, the Jackrabbits’ best wrestler, to train with him over the summer. “When I stepped out onto the mat for the first time I wasn’t very good and I got my butt kicked, but wrestling gave me an indescribable feeling. Nothing made me happier than stepping on the wrestling mat.” Freije, who weighed 152, was relentless, pummeling his new apprentice every day, often reducing him to tears. Robles wanted no allowances for his disability, inexperience or weight disadvantage. For cardio training, Freije had him push cars over speed bumps in the oppressive mid-day desert heat.

Desperate to avoid the repeated drubbings he was enduring on the mat, Robles– who had terrible balance on one leg– tried a radical change in his stance, dropping to the mat on two hands and a knee. This “tripod” position lowered his center of gravity and, by tucking his leg under his haunches, substantially reduced his exposure to attack. In his sophomore season, Robles finished sixth in the state tournament. The following year, he was named team captain, went undefeated and won the state title. Robles repeated that feat as a senior, finishing his career with a record of 129-15, two state titles and going 96-0 in his final two years. He capped off his senior season by winning the national championship while awaiting offers from his top college choices: wrestling powers Iowa, Oklahoma State and Columbia.

The only Division I calls Robles received were from Arizona State and Drexel, both middling programs. Robles accepted a partial scholarship to ASU and took a job washing airplanes at night to supplement his income. After redshirting his freshman year, he finished sixth in the 2006 FILA Junior World Freestyle Wrestling Championships. In his first college season, Robles went 25-1. The following year, he went 29-8, won the Pac-10 title at 125 pounds and was named All-American after finishing fourth in the NCAA Championships. Robles went 32-4 as a junior, repeated as Pac-10 champion and earned All-American honors after finishing seventh in the NCAAs. In 2010-11, Mr. Robles finished the season undefeated and became a three-time Pac-10 champion at 125 pounds. After winning the first four matches of the NCAA championships at the Wells-Fargo Center in Philadelphia, he faced Iowa’s Matt McDonough in the final. Knowing he would face McDonough, Robles had kept a picture of the defending NCAA champion his locker all season long and looked at it before and after every practice. Over 17,600 wrestling fans saw Robles dominate the Iowa Hawkeye, scoring seven points in the first period and holding on to win, 7-1, capping off a perfect 36-0 season en route to being named Most Outstanding Wrestler of the NCAA tournament.

The human leg accounts for 16 percent of total body weight, meaning Robles has a frame equivalent to a 150 pounder. At 5’8” tall, Robles is one to three inches taller than most 125 pounders, giving him a reach advantage. He bench presses over 300 pounds and can knock out 100 pulls ups in two minutes. Perhaps his greatest asset is his hand strength—Robles can crush an apple in one hand–developed over years of walking with crutches. Robles went 122-23 at ASU and is eighth on the Sun Devils’ all-time wins list. He graduated with a degree in communications in 2011 and was inducted into the National Wrestling Hall of Fame in 2012. Robles won the Jimmy V Award for sports courage at the 2011 ESPYs and currently works as a motivational speaker, wrestling analyst for ESPN and the Pac-12 Network and serves on the Presidential Council on Fitness. His book, “Unstoppable; From Underdog to Undefeated: How I Became a Champion” was released in 2012, the same year he was presented the Most Courageous Athlete Award by the Philadelphia Sports Writers Association.

“My parents raised me to believe I could do whatever I set my mind to.”– Anthony Marc Robles