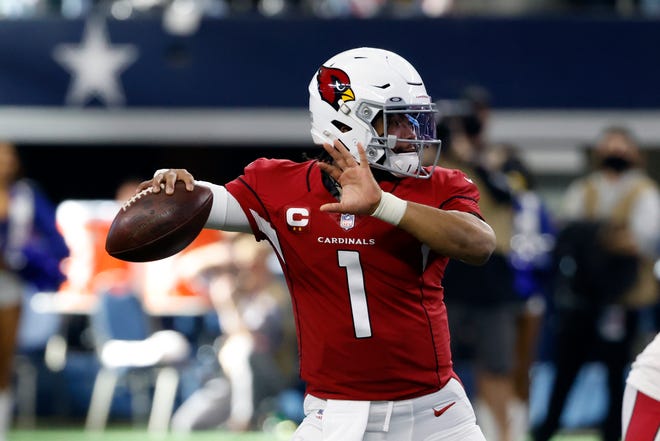 The Arizona Cardinals are the oldest team in the National Football League.

The Morgan Athletic Club was a neighborhood tackle football team that formed on the South Side of Chicago in 1898.  In 1901, team owner Chris O’Brien purchased used jerseys from the University of Chicago Maroons football team.  The color of the old shirts had faded– O’Brien called it “cardinal red”– and since the team played its games in Normal Park along Racine Avenue, they became known as the Racine Cardinals.

The Pottsville Maroons defeated the Cardinals in December 1925 to claim the best record in the NFL, but were stripped of the title for playing an unsanctioned game earlier in the year [the NFL did not have a set schedule at that time].  O’Brien was then offered—but refused to accept—the Championship title for his team, arguing that his team did not deserve to take the title over a team which had beaten them fairly.  When Charles Bidwell bought the team in 1933, the Cardinals began claiming the title.  Both the NFL and Pro Football Hall of Fame continue to list the Cardinals as the 1925 NFL champion, and it remains the most controversial title in pro football history.

The Cards did not enjoy much success in the two decades following the 1925 season.  In 1944, due to player shortages caused by World War II, they merged with the Pittsburgh Steelers for one year.  Three seasons later, led by the “Million Dollar Backfield” of quarterback Paul Christman, halfbacks Charlie Trippi and Elmer Angsman, and fullback Pat Harder, the Cards beat the Philadelphia Eagles, 28-21, to win the 1947 NFL Championship.

Charles Bidwell was not around to see it as he had died before the season, leaving the team to his wife, Violet.  Chicago returned to the title game in 1948, where they fell in a rematch with the Eagles played in a snowstorm.  It would be their last taste of success, as the Cardinals won only 33 games in the 1950s.

Overshadowed by the Bears in Chicago, attendance was sparse and the team was nearly bankrupt.  After 40 years in the Windy City, the Cards sought a new home.  In a move that blocked a potential market for the newly formed AFL, the NFL’s 12 owners unanimously approved the Cardinals move to St. Louis prior to the 1960 season.

In St. Louis, the Cardinals shared Sportsman’s Park with the baseball team.  To avoid confusion, they were called the “Big Red” or “Football Cardinals.”  One of the team’s first moves was to add a cardinal to the side of the of their white helmet–an iconic logo that remains today.  St. Louis is a baseball town, and football tickets were difficult to sell.

Violet Bidwell died in 1962 and her sons Bill and Charles Jr. took control.  Unhappy with attendance, they considered a move to Atlanta in 1964 before St. Louis promised a new stadium.  In 1966, the baseball and football Cardinals both moved into brand new Busch Stadium, one of many multi-use, synthetic-surfaced, charmless venues built in the 1960s and 70s.

The Big Red failed to make the playoffs in the 1960s and, in 1972, Bill Bidwell bought his brother out and took sole possession of the team.  Under coach Don Coryell’s high-flying offense, the “Cardiac Cards” won NFC East titles in 1974 and 1975, but failed to win a playoff game.  Their mediocrity continued into the 1980s.  Unhappy with the stadium and declining attendance, Bidwell considered relocating to Phoenix, Baltimore and Jacksonville, each of which was vying for an NFL team.

In 1987, the Cards staged the largest comeback in NFL history, rallying from a 28-3 deficit against Tampa Bay to score four touchdowns in the fourth quarter for a 31-28 victory.  It would be too little, too late, and after 28 seasons in St. Louis, Bill Bidwell agreed to a handshake deal to move to the desert in 1988 and become the Phoenix Cardinals.

Known as the Phoenix Cardinals for their first six seasons in Arizona, the franchise became the Arizona Cardinals in March 1994.  For their first 18 years of existence, they played home games at Sun Devil Stadium in suburban Tempe—an aging college facility shared with Arizona State University.

In 2006, the Birds built a new nest and moved into University of Phoenix Stadium in Glendale, about 16 miles northwest of downtown Phoenix.  The following year, Bill Bidwell’s son Michael took over as team president.  Only the Bears and Giants have been in the hands of one family longer that the Cardinals.

A 20-7 wild card victory over the Dallas Cowboys in 1998 marked the franchise’s first playoff win since the 1947 NFL title game.  Ten years later, they won the 2008 NFC title before falling to the Pittsburgh Steelers 27-23 in the waning seconds of one of the most exciting Super Bowls ever played.  In 29 seasons in Arizona, the Big Red has won three NFC West titles and played in two conference title games.

The Cardinals have retired five numbers during their 97 years, including number 40, which was worn by Pat Tillman.  In the aftermath of the September 11 attacks, Tillman, who had played safety for the Cards for four seasons, joined the Army Rangers and served several tours of duty in combat before he was killed in the line of duty in 2004.  Sixteen Cardinals have been inducted into the franchises’ Ring of Honor, including Tillman and offensive tackle Dan Dierdorf, who spent his entire 13-year career in St. Louis.

The team has sent 18 players, coaches and executives to the Pro Football Hall of Fame, including Jim Thorpe, who played one game as a Chicago Cardinal in 1928.  Despite the their lack of success in St. Louis, several Cardinal greats established all-time franchise marks while playing there.

The Cardinals are the only team in pro football history to score exactly four points in one game.  On November 25, 1923, they lost to the Racine Legion, 10-4.  The former Morgan Athletic Club spent 40 years in Chicago, 28 more in St. Louis, and completed their 29th season in Arizona in 2016.

The Cardinals’ overall record during that time is 549-741-40.  Last year, one team with Chicago roots passed the burden to another.  With the Cubs winning the 2016 World Series and ending their championship drought, the Cardinals 68-year old championship drought is now the longest in North American professional sports.

On this date in 1988, NFL owners voted to allow Bill Bidwell to move the Cardinals to Phoenix, Arizona.