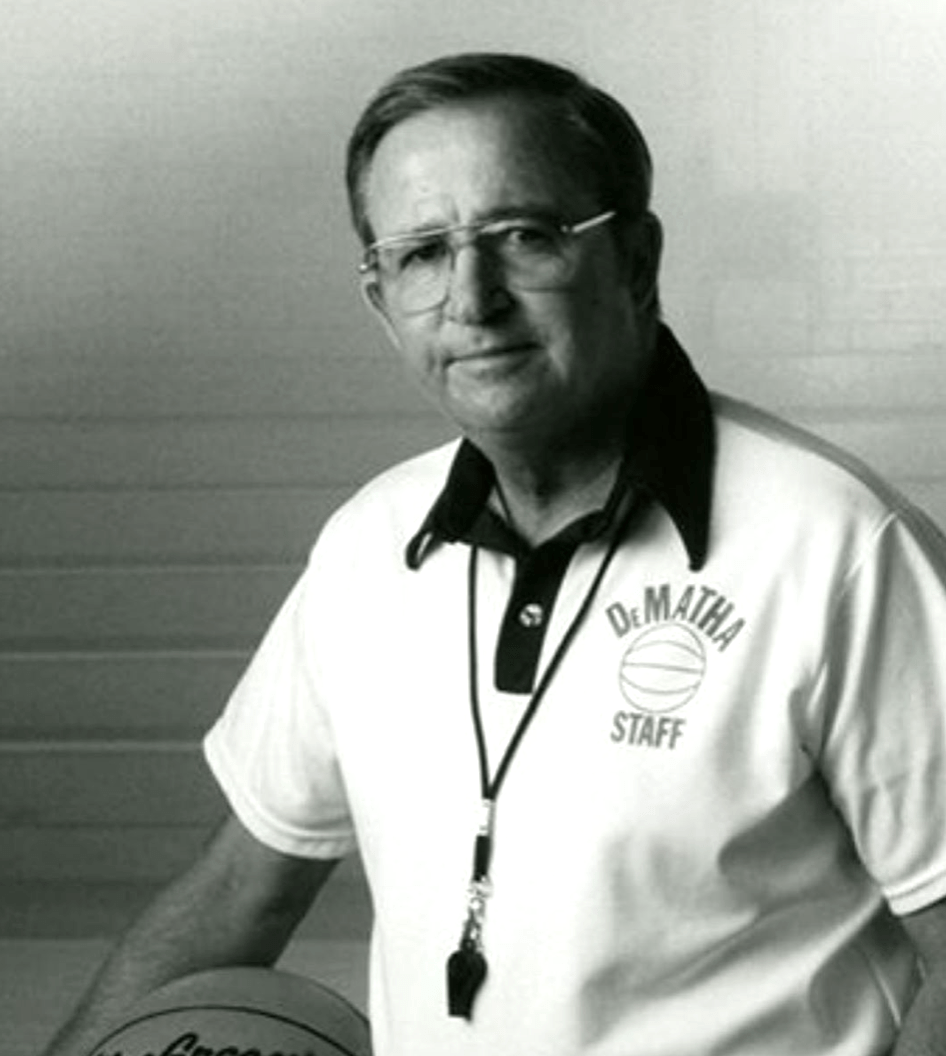 Happy 86th birthday to one of the most successful and innovative coaches in the history of high school basketball.

Morgan Wootten is synonymous with coaching basketball.  He led DeMatha Catholic High School for 46 years.  During that time, Wootten went 1,274-192, winning five mythical national prep championships, 22 Washington, D.C. titles and 33 Washington Catholic Athletic Conference crowns.  At the time of his retirement in 2002, Wootten had the most wins in the history of high school basketball [he was surpassed in 2003 by Robert Hughes, who coached in Texas from 1973 to 2005 and retired as the all-time winningest,with 1,333].  Wootten’s teams won at least 20 games in 40 different seasons.  More than 150 of his players went on to play college basketball, while a dozen played in the NBA.  Over 20 of Wootten’s former coaches or players coached at the high school, collegiate or pro level.  With a love of the game and a passion for teaching, Wootten was named 1984 USA Today National Coach of the Year and Naismith Scholastic Coach of the Century in 2000.  “I know of no finer coach at any level – high school, college or pro,” said John Wooden.  “I stand in awe of him.”  Wooten is one of three high school coaches that have been inducted into the Naismith Basketball Hall of Fame, following Ernest Blood and preceding Bob Hurley.

Named after St. John of DeMatha, a 12th century Christian saint and founder of the Order of the Most Holy Trinity, DeMatha is a four-year Catholic school for young men located in Hyattsville, Maryland, outside Washington, D.C.  Founded in 1946, DeMatha was named the number-two high school athletic program in the U.S. by Sports Illustrated in 2005 and again in 2007.  With an enrollment of 800 students spread across a ten-acre campus, DeMatha has an annual tuition of $ 17,000 and emphasizes the importance of being “a gentleman and a scholar.”  Alumni include two-time NFL Pro-Bowler Brian Westbrook, NFL Today host James Brown, and lacrosse superstar Paul Rabil, who went on to become a two-time All-American and national champion at Johns Hopkins University.

DeMatha basketball alums include Danny Ferry, Kenny Carr, and Victor Olidipo.  The best player to come out of DeMatha is Adrian Dantley, who went on to become a consensus All-American at Notre Dame and star of the gold-medal-winning 1976 U.S. Olympic basketball team.  A six-time NBA All-Star, Dantley won two league scoring titles, amassed over 23,000 points in his 15-year career, and joined Coach Wooten in the Naismith Hall of Fame in 2008.

Morgan Bayard Wooten was born in Durham, North Carolina, on this date in 1931.  His family left Tobacco Road for the Washington, D.C. area, where he attended Montgomery Blair High School in Silver Spring, Maryland.  Wootten enrolled at the University of Maryland and, after graduating,  took his first coaching job at St. Joseph’s Home for Boys.

Some have called it the greatest high school game ever played.  On January 31, 1965, before a capacity crowd at Cole Field House – two miles south of DeMatha on the campus of the University of Maryland – DeMatha hosted New York City’s Power Memorial High School.  Led by 7’1” Lew Alcindor [who later became the NBA’s all-time leading scorer as Kareem Abdul-Jabbar], Power was riding a 71-game winning streak and had been tabbed as the mythical number-one high school team in the nation.  Under 33-year-old coach Morgan Wootten, DeMatha was no slouch, as the Stags were riding a 23-game win streak of their own.  When the two teams played one year earlier, Alcindor scored 35 points – over half his team’s total – in a 65-62 Power Memorial win.  The situation changed in 1965 as 12,500 spectators saw DeMatha limit Alcindor to 15 points en route to a 46-43 victory.

The game firmly established DeMatha as one of the top prep programs in the country and put the D.C. area on par with New York City and Philadelphia as recruiting hotbeds.  “Our win over Power then gave us a reputation as a basketball area,” explained Wooten. “The influx of college coaches coming here really began after that.”  The win cemented Wooten as an elite coach, as in the ensuing years he received – and turned down – job offers from North Carolina State, Georgetown, and American University.  Duke, Wake Forest, and Virginia also showed interest.  The only college job he wanted was head coach at Maryland, a position his alma mater never offered.

Wootten’s biggest coaching influence is Joe Gallagher, who hired him to coach JV football and basketball at St. John’s College High School in 1953.  “He was a classy guy,” said Wootten. “A mentor and role model and friend.”  In 1957, his second year at DeMatha, Wootten was invited to lunch with legendary St. John’s coach Joe Lapchick.  “A player will never forget his coach,” Lapchik told his young protégé.  “They may forget some of the kids they went to school with, some teachers they had, some people they met along the way, but they will never forget their coach, the man who is supposed to help them become a total human being and a success in whatever they decide to do in life.”

In 46 years at DeMatha, Coach Wootten never had a losing season.  Playing about 32 games per year, the Stags had nine 30-win seasons.  Their most losses in any one season was ten, which happened three times.  Competing in one of the best leagues in the country and facing top teams from all over the nation, Wootten never went undefeated but had five seasons with only one loss, including a 34-1 mark in 1997-98.

An innovator who helped shape the modern high school game, Wooten started the first summer basketball camp in 1961.  He was the first coach to schedule powerhouse opponents from other states, use full-court pressure defense, and employ the defense technique that led to charging – an offensive foul that had rarely been called.  Wootten was the chairman of the selection committee to pick the McDonald’s High School All-American Team and was the first recipient of the Walt Disney Award, presented to the top sports coach in America.  He retired following his 46th season, in which his team went 32-3 and was ranked eighth in the nation, saying, “There is a time under the heavens for everything.  This is the time for me to step down at DeMatha.”

“You know the best thing about coaching?  Ten, 15, 20 years later one of those players will come back with a smile and say, ‘Hi, Coach.’  And that’s what this business is all about: ‘Hi, Coach’”
– Morgan Wootten.