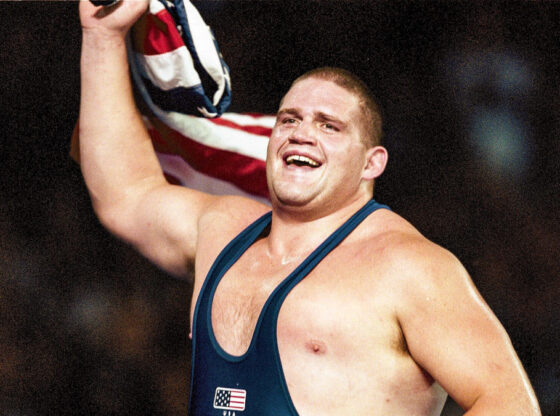 Since 1908, the United States has won a dozen medals in Greco-Roman Olympic wrestling.  Rulon Gardner earned two of them.

The 1980 Winter Games gave us the Miracle on Ice — the dramatic hockey game in which the underdog Americans beat the seemingly invincible Soviets en route to capturing the Olympic gold medal.  The 2000 Sydney Olympics gave us the Miracle on the Mat, when an unknown American defeated an unbeatable Russian to earn a wrestling gold medal in one of the biggest upsets in Olympic history.

An aw shucks farm boy from rural Wyoming, Rulon Gardner pulled off the upset of the century.  In a match that was supposed to be a coronation, not a competition, Gardner shocked the world by beating the heavily-favored Russian super heavyweight, Aleksandr Karelin, in the gold medal match of the Greco-Roman wrestling tournament.

Karelin was a legend.  The 6’4”, 286-pound “Russian Bear” had a lifetime record of 33-1 in World Championship and Olympic matches.  He had won nine straight world championships and came into the 2000 Games trying to become just the third athlete ever to win Olympic gold in the same event four consecutive times.

The Russian had no weaknesses.  He had not given up a point in six years and had not lost in international competition in 13 years.

Gardner had faced Karelin before, losing 5-0 in 1997.  He had never placed higher than fifth in the world before Sydney, and had exceeded expectations by reaching the Olympic finals.

In Sydney, Karelin breezed to the finals, not surrendering a single point along the way.  The three-round gold medal match was scoreless after one period.  In the second, Gardner earned one point for an escape, then held off a furious rally from Karelin to win, 1-0, and earn America’s first-ever Greco-Roman gold medal.  Following the victory, the elated Gardner treated the stunned crowd to a cartwheel and somersault, then paraded about the arena draped in an American flag.

After the match, Karelin – dubbed “Alexander the Great,” retired.

Born August 16, 1971, Rulon E. Gardner is the youngest of nine children,  Raised on a dairy farm in Afton, Wyoming – in the western part of the state, near the Idaho border – Gardner was part of a hard-working Mormon family, and years of farm labor made Rulon country strong.

A three-sport letterman at Star Valley High School, Gardner was All-State in football, took second at the state finals in the shot put, and won the 1989 Wyoming high school heavyweight wrestling championship.

Gardner, who started wrestling at six, earned a scholarship to Ricks College in Rexburg, Idaho.  As a sophomore, he won the national junior college heavyweight title.  Gardner finished at the University of Nebraska, where he went 58-15-2.  After placing fourth at the 1993 NCAA championships, he was named All-American.

Handicapped with learning disabilities – Gardner struggled with reading speed and comprehension – Gardner wondered if he’d even finish high school, let alone go to college.  In 1995, he earned a phys ed degree from Nebraska.

A staph infection prevented Gardner from going to the 1996 Atlanta Games, but he returned to capture a gold medal at the Pan Am Games in 1998.

Two years later, he made the U.S. Olympic team as a super heavyweight.  Following his stunning win over Karelin, the U.S. team voted the 29-year-old Gardner flag-bearer for the closing ceremonies in Sydney.

The following year, Gardner won the world championship to become the only American ever to win both a World and Olympic title in Greco-Roman wrestling.

In 2002, Gardner nearly died after a night stranded in the Wyoming wilderness with his snowmobile.  Severe frostbite cost him the middle toe on his right foot, which he keeps in a bottle of formaldehyde in his refrigerator as a reminder of his mortality.

Gardner returned to capture the bronze medal in the 2004 Athens Olympics.  Following the match, he left his shoes at the center of the mat, signifying his retirement.

In 2007, Gardner was involved in a plane crash into Lake Powell, along the Arizona-Utah border.  He had to swim for an hour in 44-degree water to reach the shore, spending a night without fire or shelter before being rescued.

After retiring from wrestling, Gardner ballooned to more than 470 pounds.  In 2011, he participated in television’s Biggest Loser and dropped 200 pounds.

The following year, the 41-year-old former Cornhusker unsuccessfully attempted to qualify for the 2012 U.S. Olympic team.

The recipient of the 2001 Sullivan Award as the top amateur athlete in America, Gardner received the Jesse Owens Award and was named U.S. Olympic Committee Sportsman of the Year that same year.  Voted an ESPY as male Athlete of the Year for his performance at the 2000 Sydney Games, Mr. Gardner was inducted into the national Wrestling Hall of Fame in 2010.