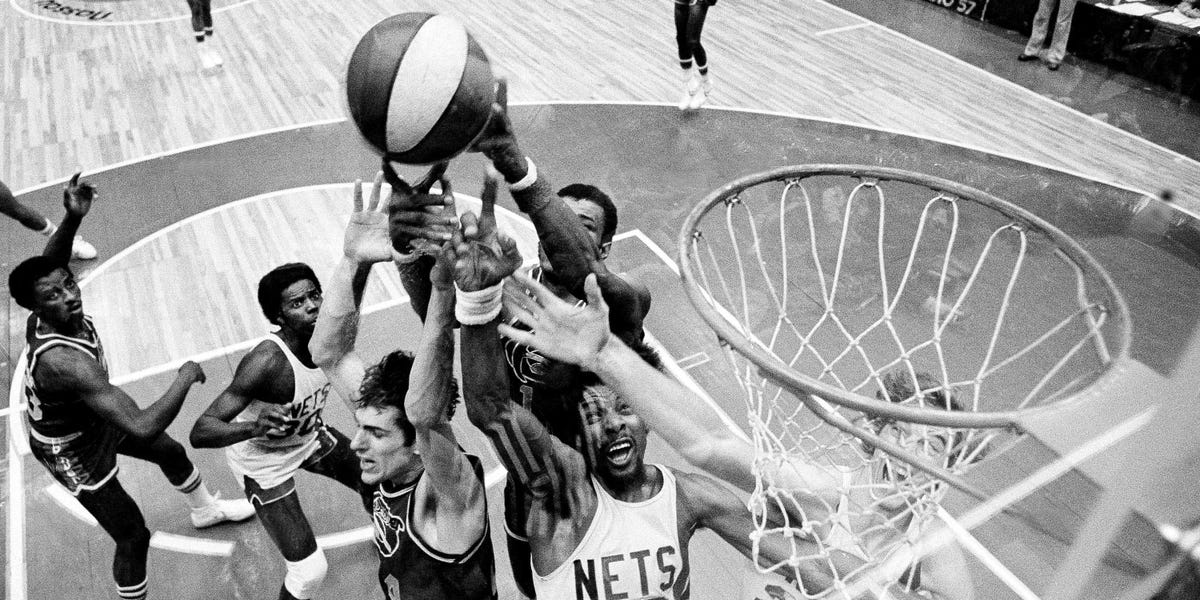 In 1976, Ozzie and Daniel Silna negotiated the greatest sports deal ever.

Natives of New York, the Silna brothers made a fortune in polyester.  They wanted to own an NBA team and, in 1973, tried to buy the Detroit Pistons.  After their attempt fell short, the Silnas purchased the ABA Carolina Cougars for $ 1 million, with hopes of gaining entry into the NBA following the impending merger.  They immediately moved the Cougars to St. Louis, then the largest U.S. city without a professional basketball team, and rechristened them the Spirits of St. Louis [named after the plane Charles Lindbergh flew across the Atlantic].

The Spirits, one of the most colorful and chaotic franchises in the history of the free-wheeling ABA, began play in the 1974-75 season.  Playing in the 18,000-seat St. Louis Arena – the Checkerdome – the team’s announcer was 22-year-old Bob Costas, who had landed his first broadcasting gig fresh out of Syracuse University.  The Spirits’ star player was Marvin Barnes, an All-American from Providence College.  Barnes, whose nickname was “Bad News” for his frequent off-court problems, was a legendary character.  After a sizzling start in 1974, Barnes bolted the team one month into the season.  He was found days later in Dayton, Ohio, playing in a pool tournament with his agent.  Barnes returned and went on to be named 1974-75 ABA Rookie of the Year.

In their inaugural season in St. Louis, the Spirits knocked off Julius Erving and the defending champion New York Nets in the first round of the ABA playoffs.  But the euphoria would be short-lived.  The following year, the Spirits acquired Moses Malone, M.L. Carr, Don Chaney and Ron Boone.  Despite a talented roster, the team tanked and attendance in St. Louis fell through the floor.  In the waning days of the 1975-76 season, it was not uncommon to see fewer than 600 fans in the cavernous Checkerdome, and the Silnas announced they were moving the franchise to Salt Lake City to become the Utah Rockies.

Tired of bidding wars and wary of future litigation, the NBA decided to merge with the ABA, which was down to six teams and on the verge of financial collapse.  At a meeting in Hyannis, Massachusetts, in the summer of 1976, the NBA agreed to add four ABA franchises: the Denver Nuggets, Indiana Pacers, San Antonio Spurs, and New York [later New Jersey, then Brooklyn] Nets.  The ABA then offered $ 3 million each to the two remaining franchises to fold.  The Kentucky Colonels took the deal.  The Silnas did not.

Instead, the brothers stuck with the deal they believed the ABA owners had agreed upon before the meeting; that a team left out of the merger would receive a one-seventh share of the NBA’s “visual media” rights given to each of the former ABA teams that merged with the senior league.  Eager to tidy up the deal, the ABA agreed to the demands of the Silnas and their lawyer, Donald Shupak.  The brothers were to receive a $ 2.2 million lump sum buy out.  But here’s the best part: the deal stated that the Silnas would receive a four-seventh share [roughly two percent of the total] of the NBA’s television revenue … in perpetuity.

That wasn’t much at first.  In 1977, CBS was in the first year of its TV contract with the NBA.  Ratings were so poor that the network aired the NBA Finals on tape delay.  Thanks to Larry Bird, Magic Johnson and, eventually, Michael Jordan, the NBA exploded in popularity in the 1980s and 90s.  Television fees escalated accordingly. CBS gave way to the NBA on NBC, plus TNT and TBS cable networks gained broadcast rights.  By 2011, the NBA received $ 930 million annually it television fees.

The NBA tried to buy out the Silnas several times, including an effort before the financial crash of 2008, but the brothers refused.  By 2014, the league had paid the Silnas more than $ 300 million for a team that had lasted two seasons.  The Silnas filed a suit in federal court demanding additional compensation from sources of television revenue that did not exist in 1976, including NBA TV, foreign broadcasting of games and League Pass, the service that lets fans watch out-of-market games.

In January 2014, the NBA and four former ABA teams announced a deal that effectively ended the Silnas’ golden annuity.  The brothers were paid $ 500 million to settle their lawsuit, bringing the total value of the “in perpetuity” deal the Silnas struck 38 years earlier to $ 800 million.  And they had no costs – not employees, not a building and not an NBA payroll.  Truly the greatest sports deal ever.

Ozzie Silna, who is 11 years older than his brother, died of cancer on Daniel’s birthday in April 2016.  Now 74, Daniel reflected on the shrewd deal he and his brother negotiated in 1976, saying, “We had no concept it would grow into what it is today.”