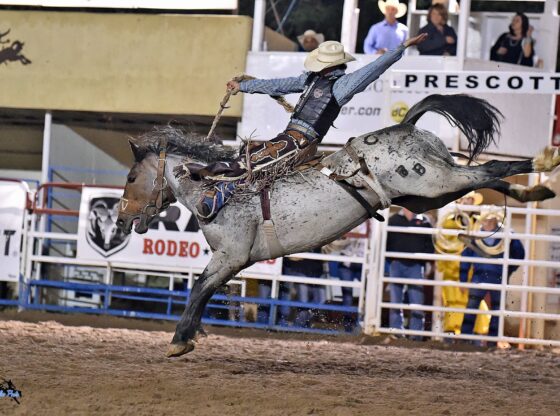 This afternoon marks the conclusion of the 2018 Prescott Frontier Days Rodeo.

Prescott, Arizona, is home to the world’s oldest rodeo.  Situated at 5,500 feet above sea level in the north-central part of the state, Prescott has 40,000 residents and is known for its western and cowboy feel.  It all began July 4, 1888, when a group of merchants and businessmen from Arizona’s original capital city organized the first formalized cowboy tournament, and offered cash prizes.  Juan Leivas won the inaugural event and, with it, rodeo’s first professional title.

Rodeo is a Spanish word for “to round up.”  It is a sport rooted in the real-life skills used in ranching.  Since the first event on Independence Day 1888, rodeo has grown into a multimillion dollar enterprise with more than 700 professional events across all 50 states.

The original site for the Prescott Rodeo was on a tract of land called Forbing Park, located off what today is Iron Springs Road.  The unimproved parcel was roped off to keep the broncs from running away after tossing their riders.  The total purse for the maiden event was less than $ 1,000.

The name Prescott Frontier Days was coined in 1913, the year the event moved to its current location, the Prescott Rodeo Grounds [formerly known as the Yavapai County Fairgrounds].  Will Rodgers was an early attendee of the Prescott Rodeo.  Although the Yavapai County Fair suspended operations from 1933 to 1947, the rodeo continued uninterrupted, and has been held annually for 131 years.

In the mid-1930s, federally funded Works Progress Administration and Civilian Conservation Corps projects helped improve the rodeo grounds.  The grandstand, Doc Pardee and Danny Freeman Buildings and stone fish pond at the existing gate were all constructed as America slowly emerged from of the Great Depression.

For nearly four decades, the Prescott Rodeo was a single-day event held on July 4.  Beginning in 1937, Frontier Days became a week-long celebration, attracting fans from throughout Arizona.

The Prescott Jaycees took control of Frontier Days in 1968.  As the event expanded and purses became richer, more cowboys entered the event.  To meet the growing demand, the Harry Vold Company was hired to provide top livestock.  Harry Vold, who died in March 2017, was the largest livestock contractor in the world, and served the Prescott Frontier Days rodeo for half a century.

The 1972 film, Junior Bonner, starred Steve McQueen as a veteran rodeo cowboy returning to his hometown of Prescott to compete in the annual rodeo.  Filmed around the actual rodeo and Frontier Days Parade, the film thrust the event into the worldwide spotlight.  Some 13 years later, the name World’s Oldest Rodeo was patented.

The Prescott Frontier Days Rodeo is one of 16 cowboy competitions inducted into the Pro Rodeo Hall of Fame.  The week-long event – which generates approximately $12 million for the local economy – includes a dance, a parade, and an arts and crafts show.  The area’s largest annual event, PFDR also features events for youngsters, including the Happy Hearts competition for developmentally challenged children, and a Kiddie Parade.

The 131st  Prescott Frontier Days Rodeo concludes today, when the greatest cowboys on earth compete in the eighth and final performance of the World’s Oldest Rodeo.