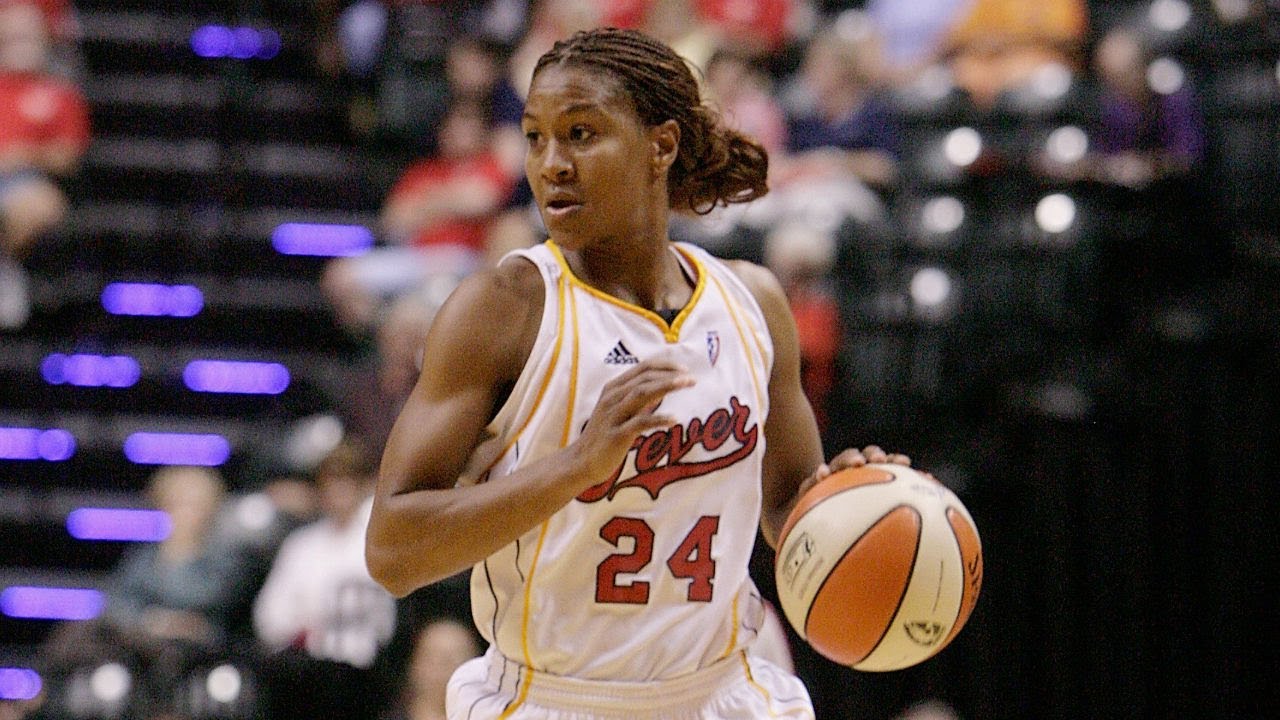 Harvey Catchings played in the NBA as a six-foot, nine-inch power forward for 11 seasons.   And he isn’t even the best basketball player in his household.

Tamika Devonne Catchings is one of the greatest players in women’s basketball history.  She led two different high school teams to state titles and was an NCAA champion and four-time All-American at the University of Tennessee.  Catchings played her entire 15-year career for the Indiana Fever of the WNBA and was voted as one of the WNBA’s Top 15 Players of All Time.  She is one of eight women to win a World Championship gold medal, Olympic gold medal, NCAA championship and a WNBA championship.  A prolific scorer, rugged rebounder and tenacious defender, Tamika Catchings was the first player—male or female—to record a quintuple-double [25 points, 18 rebounds, 11 assists, 10 steals and 10 blocks as a high school senior in 1997].

Born in Stratford, New Jersey, July 21, 1979, Tamika is the middle of Wanda and Harvey’s five children.  After his NBA career ended, Harvey Catchings landed a job in Chicago as a radio analyst for the NBA’s Bulls.  Tamika moved with her family to suburban Deerfield, where she attended Adlai E. Stevenson High School—alma mater of NFL coaches Rex and Rob Ryan and  Ron Goldman, of whom O.J. Simpson was famously acquitted of murdering in the “trial of the century.”  In addition to basketball, Catchings played soccer, volleyball, and ran track.  As a sophomore, she and her older sister Tauja led Stevenson to the Illinois state basketball title.  Tamika was named Ms. Basketball becoming, at 15, the youngest player to win the award in Illinois girls’ basketball history.  After Harvey and Wanda divorced, the sisters split up.  Tamika moved with her mother to Duncanville, Texas, while Tauja stayed with her father, led the Patriots to a repeat state title, and was named 1996 Illinois Ms. Basketball.

As a junior, Tamika Catchings led Duncanville High School to the only state volleyball title in school history.  The following year, she led the Panthers to a 40-0 record and the state basketball championship.  Catchings was named Texas Ms. Basketball, WBCA Prep Player of the Year and won the 1997 Naismith Award as the best female high school player in America.  After receiving scholarship offers from nearly every Division I school in the country, the four-time Parade High School All-American decided to attend the University of Tennessee to play for legendary coach Pat Summit [Daily Dose, 11/13/15].

The 1997-98 Tennessee Volunteers [Daily Dose, 8/9/16] are one of the most dominant teams in women’s college basketball history, going 39-0 and winning their third consecutive national championships while playing one of the toughest schedules in the nation.  Catchings was named All-American, National Rookie of the Year and SEC Newcomer of the Year.  The Lady Vols won the SEC regular season title in each of Catchings’ four seasons, claimed three SEC tournament crowns, appeared in four NCAA tournaments and reached the championship game in 2000.  UT went 134-10 during her four years in Knoxville and Catchings was named All-American in each.  She was named 2000 Naismith Player of the Year and won an ESPY for College Player of the Year.  Catchings graduated on time with a degree in Sports Management.  A few years later, she returned to UT to complete a Master’s Degree.

The Indiana Fever selected Tamika Catchings with the third overall pick of the 2001 WNBA Draft.  After sitting out 2001 rehabbing a torn ACL, she returned the following year to lead all rookies in scoring, rebounding, three-pointers made, blocked shots and minutes played.  Catchings became the first WNBA player to record 60 three-pointers and 80 steals in a season.  After leading the Fever to the playoffs for the first time in franchise history, she was named 2002 WNBA Rookie of the Year.  Three years later, the 6’2”, 180-pound forward scored her 2,000 point, reaching that milestone faster than any player in league history.  Catchings led Indiana to the Finals in 2009, where they lost to the Phoenix Mercury.  In 2011, she was named league MVP.  The following year, she led the Fever to the WNBA title, earning Finals MVP honors.  She passed Lisa Leslie as the WNBA’s all-time leading playoff scorer in 2014 and, one year later, passed Leslie as the league’s all-time leading rebounder.  In 2016, she won her third Kim Perrot Sportsmanship Award, given annually to the WNBA player who most “exemplifies the ideals of sportsmanship on the court—ethical behavior, fair play and integrity.”

One of the most game-changing players in women’s basketball history was born with moderately severe hearing loss in both ears.  She has overcome this handicap with the same approach she used in becoming an Olympic, NCAA and WNBA champion—hard work and a relentless commitment to improvement.  “It’s never been about individual statistics for Tamika,” said Sara Hackerott, who coached Catchings at Duncanville High School.  “It’s about becoming the best player she can be and how her team was performing.”  A ten-time All-Star, Catchings is the only player in WNBA history to rank among the top ten in career points, rebounds, assists, steals and games played.  She had no weaknesses–leading the league in steals eight times while being named WNBA Defensive Player of the Year five times.  Catchings earned every honor imaginable.  She was 2002 Rookie of the Year, 2011 league MVP and was Finals MVP in 2012.  Catchings was first team All-WNBA seven times, was the leading vote-getter at the 2006 All-Star Game and was runner-up in 2003 league MVP voting.  Playing for Team USA, Catchings won four Olympic gold medals.  She was named to the WNBA All-Decade Team in 2006 and Top 15 Team five years later.  After 15 WNBA seasons—all with the Fever—Tamika Catchings retired in September 2016.