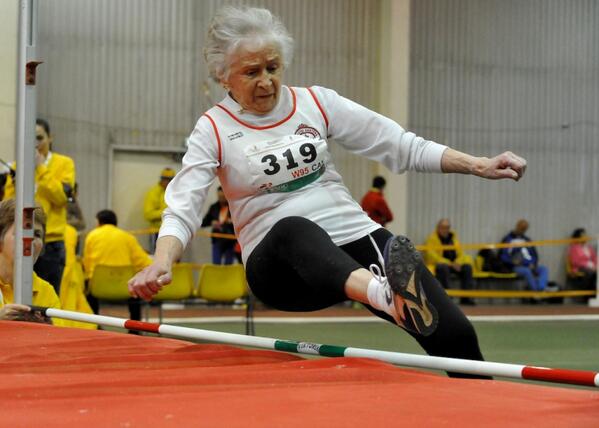 Olga Kotelko was one of the world’s greatest athletes.

Kotelko could be the poster child for late bloomers.

In 1999, at 77, she entered her first “masters” track and field competition, for participants age 35 and over.  At 85, she set nearly 20 world records in one year.  Olga competed well into her 90s, when she was the only woman in the world still long-jumping and high-jumping in masters events.

Born 100 years ago today, Kotelko was the seventh of 11 children born to Ukrainian immigrant farmers in Vonda, Saskatchewan.  Olga was a nonagenarian track and field superstar.  She held over 30 world records and won more than 750 gold medals in her age category in Masters competitions.  Kotelko held every track and field world record she attempted for her age group.

Take care of your body.  Work hard.  Rest.  Do it all over again.

As an adult, Olga Kotelko taught grades 1 through 10 in a one-room schoolhouse in Vonda, a half-hour drive northeast of Saskatoon.  She married an abusive alcoholic at a young age.  Realizing her mistake, she fled to British Columbia in 1953 while pregnant with her second child.  Kotelko moved in with her sister, raised her two daughters alone, and earned a college degree taking night classes.

In her 40s, Kotelko took up tai chi and yoga.  And after mandatory retirement rules forced her to give up teaching at 65, she joined a slow-pitch softball league, playing five positions.  In 1996, the 77-year-old Kotelko took up track and field.  She hit the gym hard, training three hours a day, three days a week.  Under the watchful eye of a strict Hungarian woman she hired as coach, Olga would perform punishing exercises like planks and Roman chairs.  She did bench-presses and squats until her muscles gave out.

She entered her first track and field meet in 1999 and fell in love with the sport.  In 1999, Kotelko competed at the World Masters Athletics Championships in England, where she broke two world records and won six gold medals.  At the World Masters Games in Sydney a decade later, she set world marks in the hammer throw and 100-meter dash.

The older Olga got, the better she performed.  She took Aquafit classes three times a week and did high-intensity interval training on the track.  She would run 100 meters, then walk 100 meters, run 100, walk.  Even in her 90s.  The petite Canadian competed in a multitude of events, including shot put, discus and javelin.  She won gold medals in long jump, high jump and triple jump.  Kotelko ran the 100, 200 and 400 meter sprints.  But her favorite event was the hammer throw.

I stopped counting my gold medals at around 750, when I was 92.  But I’ll never stop competing.

At the 2009 World Outdoor Masters in Lahti, Finland, the 90-year-old Kotelko threw a javelin 20 feet farther than her nearest age-group rival.  Her time in the 100 meters in Sydney [23.95] was faster than some of the finalists in the 80 to 84-year-old category, two brackets down.  In March 2014 — despite osteoporosis and a tumor in her right lung — Olga won ten gold medals and set nine world records over a five-day span at the World Indoor Championships in Budapest.

Olga Kotelko’s approach to living was the reason for her longevity and amazing success in athletics.

Despite adversity, including an abusive marriage, raising two kids as a single mother in the 1950s, and losing her eldest adult daughter to cancer in 1999, she remained upbeat and positive.  Subscribing to the adage, whatever doesn’t kill you makes you stronger, Olga was a fiercely committed person.  She was constantly moving: gardening, bowling or climbing the stairs in her home [which Olga estimated she did “50 times a day”].

Kotelko was blessed with amazing genes, which doctors estimate accounted for one-quarter of her success.  The other 75 percent was due to her lifestyle.  She ate four to five small meals a day, and not much in the evenings.  She did deep breathing exercises, and got up in the middle of the night to massage her muscles by rolling on a wine bottle.  Olga believed in exercise, eating whole foods, getting plenty of rest and taking time for herself.  She took a baby aspirin each day to prevent blood clots and glucosamine for joint support.

As far as I knew,” said Olga, “I was the first single mom in the history of the world.

Aside from the birth of her two daughters, Kotelko went to a hospital just once in her entire life  — for a hysterectomy.  In 2010, she was studied by doctors at the Montreal Neurological Institute as well as McGill University.  Kotelko underwent a battery of tests.  From her cognition to her muscle mitochondria, from blood serum to muscle fiber, Kotelko’s genome was examined closely.  At 91, the incredible nonagenarian was found to have muscle fibers that resembled those of a 65-year-old.

The pride of Canada, Olga Kotelko carried the torch at the 2010 Vancouver Olympics.

She was featured on the cover of Parade magazine in December 2013 and was the subject of a book written by her friend, award-winning author Bruce Grierson.  Published in 2014, What Makes Olga Run? is a biography that examines what the wild success of a 94-year-old track star can teach us about how our bodies and mind age.

Less than 90 days after her incredible nine-world-records performance in Budapest, Olga passed away at home following a brain hemorrhage June 24, 2014, at 95.

At the time of her death, she held every track and field record she attempted for her age group.

She was still reading the paper daily, doing Sudoku puzzles, and singing in her church choir.  The oldest female track athlete in history, Kotelko had hoped to take up pole vault.  Upon her passing, Les Fowler, president of the Greyhound Masters Track & Field Club in Canada, said Olga Kotelko was “an ambassador for track and field for children and adults of all ages.”  She left a legacy that has inspired countless other athletes across the globe.