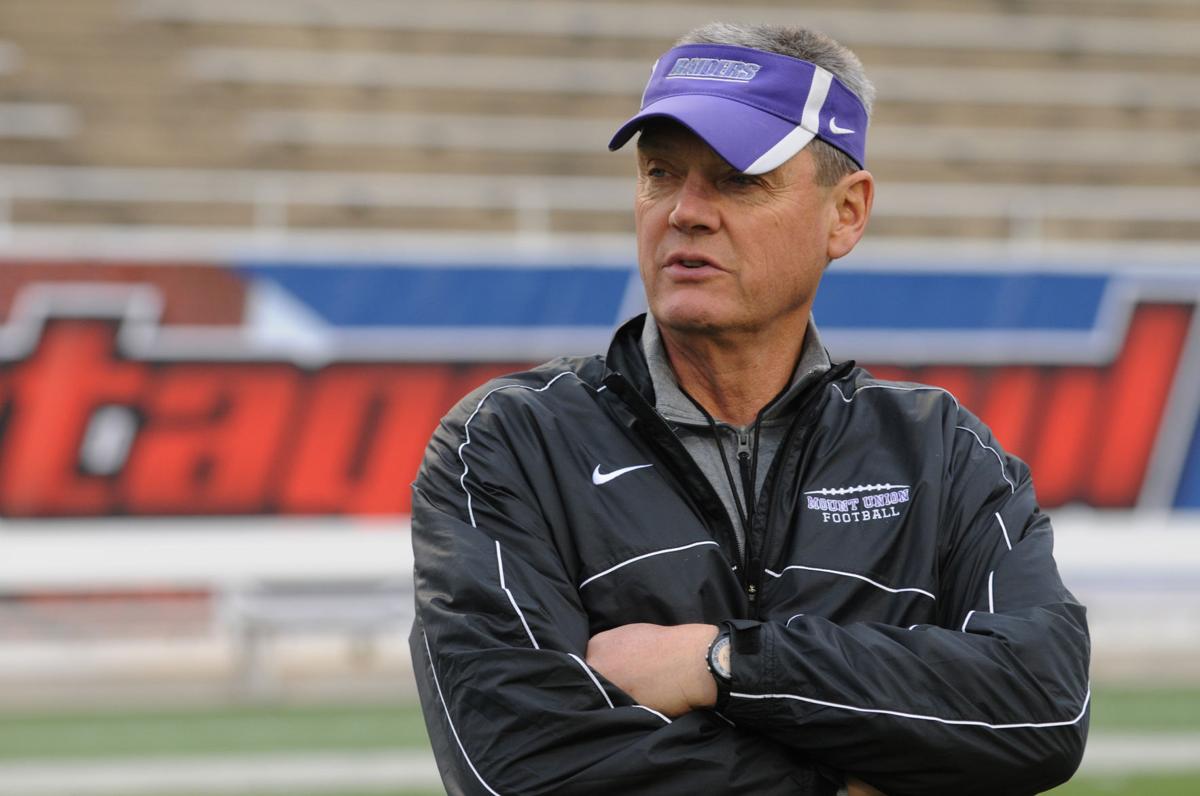 Larry Kehres is the winningest coach you have never heard of.

Kehres was head football coach at the University of Mount Union [formerly Mount Union College] from 1986 to 2012.  During his 27 seasons, the Purple Raiders won 11 Division III national championships, 23 Ohio Athletic Conference titles and went unbeaten 21 times.  Kehres went 332-24-3—winning more games and losing fewer than Bear Bryant [Daily Dose, 11/28/16], Tom Osborne or Bo Schembechler [Daily Dose, 4/1/16].  His .929 winning percentage is the greatest in college history, and no other coach with at least 200 career wins is above .844.  Two of the most legendary coaches in the history of college athletics—Bryant and the great John Wooden [Daily Dose, 10/14/15]—had winning percentages of .808 at Alabama and UCLA, respectively.  Under Kehres, the Purple Raiders won 55 straight games between 2000 and 2003, the longest win streak in NCAA history.  The previous record of 54 was set by Mount Union between 1996 and 1999.

The University of Mount Union is a private, four-year coeducational liberal arts college that was established in 1846.  Located in Alliance, Ohio—boyhood home of legendary quarterback Len Dawson and a few miles east of the Pro Football Hall of Fame—Mount Union has about 2,200 undergraduate students.  Founded as “a place where men and women could be educated with equal opportunity, science would parallel the humanities and there would be no distinction due to race, color, or sex,”  the school was attended briefly by William McKinley, former governor of Ohio and 25th President of the United States.  Competing in the ten-team Ohio Athletic Conference–formed in 1902 and third -oldest league in the United States—the Purple Raiders play their home games in 5,600-seat Mount Union Stadium, where they have lost only twice in 25 seasons.

Born September 7, 1949, Larry Kehres has lived his entire life in northeast Ohio.  He attended high school ten minutes from the Mount Union campus, graduating in 1967, and stayed in the area.  Kehres played quarterback for the Purple Raiders, came to Mount Union as an assistant football coach and professor in 1974, and was the school’s first head swimming coach.  Hired as athletics director in 1985, Kehres assumed head football coaching duties in 1987.

A quiet and humble man, he lives a three iron’s distance from the football field.  Lanky, gray-haired and sporting wire-rimmed glasses, Kehres looks more like an economics professor than a football coach.  Coach Kehres harps on excellence and rarely raises his voice.  “He’s the most humble guy I’ve been around,” says Erik Raeburn, a former Mount Union player and current coach at Wabash [IN] College. “He’s also the most successful guy I’ve been around.”  The Purple Raiders won their first O.A.C title in 1985 and won 110 consecutive regular-season games between 1994 and 2005.  Mount Union was 120-7-1 in the 1990s, yet Kehres avoids discussions about win streaks.  “This is a culture of excellence that I have never seen before,” observes Mount Union president Jack Ewing. “Coach Kehres is the key.  Few, if any, D-3 schools pay as much attention to every detail of having a successful program.”

Division III football is for the undersized and overlooked.  With no money for scholarships, players must find a way to pay the $ 35,000 annual tuition.  Former Purple Raiders Pierre Garcon and Cecil Shorts are using some of the money they currently earn as NFL wide receivers to pay off student loans they obtained to attend Mount Union.  The program, whose only real advantage is the tradition Coach Kehres has established, gets most of its prospects from northeastern Ohio and western Pennsylvania.  With 200 players on the roster and no cuts, Kehres looks for raw recruits with a decent high school pedigree and asks them three questions:  Are you a good man?  Do you have a passion for football?  Do you plan on getting the grades you’re capable of?  “I expect them to play better than they ever thought they could,” explains Kehres.  He emphasizes precision, mental preparation and weight training.  Players wash their own uniforms and rarely hit during practice.

Larry Kehres led one of the greatest programs in the history of American sports.  His teams won 21 straight conference titles in the rough and tumble Ohio Athletic Conference.  Under Kehres, Mount Union appeared in 16 Amos Alonzo Stagg Bowls–Division III’s championship game—and won 11, including eight in a row from 2005 to 2012.  In 2008, Purple Raiders running back Nate Kmic surpassed Danny Woodhead at the NCAA’s all-time leading rusher, finishing his career with 8,074 yards.  Kmic remains the only player in college football history to gain over 8,000 rushing yards.  Kehres stepped down as head coach at Mount Union following the 2012 season and handed the reins over to his son, Vince, who spent 13 seasons as an assistant to his father.  Vince Kehres played for the Purple Raiders from 1994 to 1998.    In his first three seasons as head coach, he went 43-2 and appeared in three Stagg Bowls, winning the title in 2013 and 2014.  Larry Kehres remains UMU’s director of athletics.