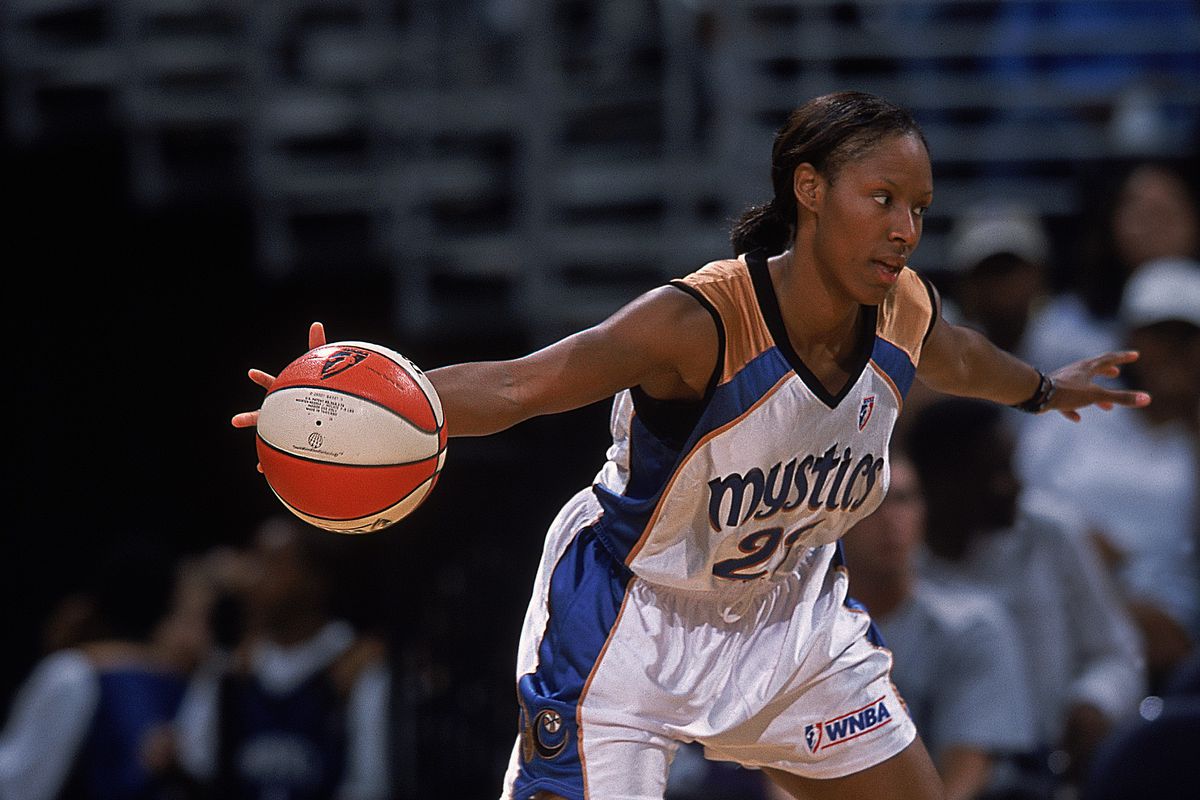 Born in the Astoria neighborhood of Queens, New York, on this date in 1977, she grew up playing basketball.  The only child of an alcoholic mother, Chamique was raised by her maternal grandmother, June Holdsclaw.  She attended Christ the King Regional High School in Queens, a private, coeducational, Roman Catholic institution and New York City basketball powerhouse.

Christ the King is the alma mater of men’s stars Lamar Odom, Jayson Williams and Khalid Reeves.  The school has also produced Tina Charles and Sue Bird–the first overall pick of the 2002 WNBA Draft.  Holdsclaw was a varsity starter for four years and led the Royals to the New York state basketball title in each of them.  As a senior, she was named a High School All-American and played in the 1995 WBCA All-American game.

Upon graduating from Christ the King in late spring 1995, Holdsclaw enrolled at the University of Tennessee to play for legendary coach Pat Summitt  [Daily Dose, 1/13/15].  She thrived under Summitt’s guidance, helping the Lady Vols to three consecutive NCAA Women’s Basketball Championships—the first “three-peat” in the history of the women’s college game—in 1996, 1997 and 1998.  The 1998 team went 39-0 and posted Tennessee’s first-ever undefeated season while setting an NCAA record for most wins in a year.  Holdsclaw also led UT to three SEC tournament championships; in 1996, 1998 and 1999.

Holdsclaw became the fifth women’s college player to score over 3,000 points and is one of five female players to collect over 2,000 points, 1,000 rebounds, 300 assists and 300 steals in a career.  Holdsclaw won the Naismith Trophy for player of the year in 1998 and 1999 and received the James E. Sullivan Award as top amateur athlete in the United States in 1998.  In four years at Tennessee, Holdsclaw went 131-17 and was named to the Final Four All-Tournament team three times.  She was named 1990s Player of the Decade and the Lady Vols were selected [along with UConn] as 1990s Co-Team of the Decade.

After the Washington Mystics made Chamique Holdsclaw the first overall selection in the 1999 WNBA Draft, she became the first, and only, female to appear on the cover of SLAM magazine.  She was pictured wearing a New York Knicks jersey above the caption, “Is the NBA Ready for Chamique Holdsclaw?”  Not only was Holdsclaw viewed as the savior of the fledgling Mystics franchise; she was considered the savior of the entire league.  In her first season, she was named Rookie of the Year and was a starter in the inaugural WNBA All-Star Game.  The following year, Holdsclaw won a gold medal as part of Team USA in the 2000 Sydney Olympics.  Holdsclaw’s statistics continued to improve.

In 2003, she averaged over 20 points and ten rebounds per game.  One year later, her behavior became erratic, as she failed to show up for a game July 24, 2004, and only played one more game the rest of the season—including the playoffs.  She was traded to the Los Angeles Sparks in March 2005 and, 14 months later, took a sudden two-week leave of absence.  A few weeks into the 2007 season, Chamique Holdsclaw surprisingly announced she was retiring from pro basketball and offered no explanation.  She returned to play the 2009 season with the Atlanta Dream before requesting a trade and signing with the San Antonio Silver Stars for the 2010 season, the eleventh and last campaign of her career.

Following her retirement from basketball, Miss Holdsclaw was diagnosed with depression and bipolar disorder, conditions that had gone untreated during her playing career and had adversely affected her mood and performance.  The 6’3”, 170 pound small forward was one of the most talented players in the history of women’s basketball, scoring 4,716 points and grabbing over 2,100 rebounds in 279 professional games.

Holdsclaw was a six-time WNBA All-Star, twice led the league in rebounding, and was the 2002 WNBA scoring champion.  Before leaving Queens for Knoxville, she promised her grandmother that she would finish college.  Chamique Holdsclaw graduated with a political science degree from UT in spring 1999.  June Holdsclaw died of a heart attack three years later.  In 2006, Miss Holdsclaw was named to women’s college  basketball’s Silver Anniversary Team as one of the 25 greatest players of the past 25 years.

“It’s an honor to be considered in the same breath, but I’m not Michael Jordan.  I’m the first Chamique Holdsclaw.  And I think that’s where the women’s game has to get to, when women are recognized on their own.”
– Chamique Holdsclaw