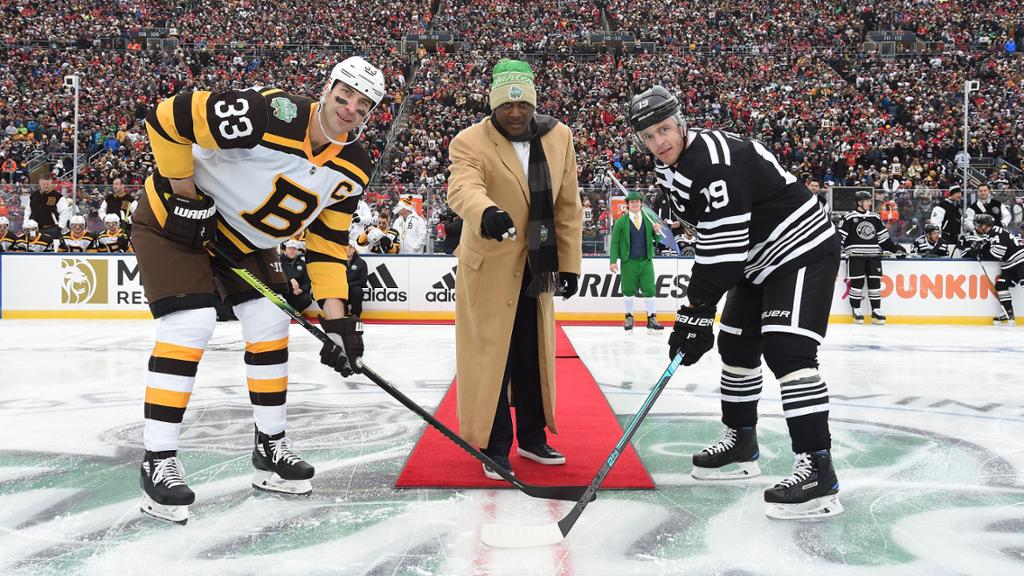 With the advent of the Winter Classic, hockey owns New Year’s Day the way baseball owns the Fourth of July and football owns Thanksgiving.

The 11th Winter Classic will be played today in Notre Dame Stadium in South Bend, Indiana.

Along with the All-Star Game, the Winter Classic is considered one of the NHL’s premier events.  Held annually on New Year’s Day, the game features the league’s most popular teams and best players.  Played in some of
America’s greatest football and baseball stadiums, the Winter Classic draws record crowds.  Despite competing with college football bowl games for television viewers, the event rivals the Stanley Cup Finals as hockey’s most-watched event.

The Winter Classic is a celebration of hockey’s roots.

The game was invented outside, where Mother Nature created the ice.  The Winter Classic is meant to invoke memories of where it all started when young boys from around the world skated on frozen ponds while dreaming of playing in the NHL.

In 2005, Jon Miller, executive vice president of NBC Sports, saw an opportunity.  The network’s contract with the Gator Bowl played on New Year’s Day, had expired, and the Gator Bowl asked for a big rights fee.  With the glut of bowl games on TV, NBC wasn’t about to do that.  Miller thought about a hockey game and knew where he wanted it played – in New York City…in Yankee Stadium…on New Year’s Day.  He pitched the idea for an Original Six rivalry game between the Boston Bruins and New York Rangers to Dick Ebersol, who, without hesitation, said, “Absolutely.”

It didn’t work out.

Yankee Stadium could not support an ice rink, the Rangers were not on board, and the NHL lockout canceled the season.  Miller revisited the idea in the spring of 2007, and the NHL decided to go with it.  The Buffalo Sabres offered to host, and the league mandated the game’s biggest star, Sidney Crosby, needed to be in the game.  The 70,000-plus tickets to the game, scheduled to be played in Ralph Wilson Stadium, home of the Buffalo Bills, sold out in 20 minutes.  Penguins season-ticket holders were miffed more seats weren’t allocated to them.

Played January 1, 2008, the inaugural Winter Classic was just that.

Sid the Kid scored the game-winning goal, in a shootout, in the snow, in front of a sellout crowd.  After the game, a beaming Penguins CEO and President David Morehouse told NHL commissioner Gary Bettman, “We’d like to host this.”  Three years later, the Penguins hosted the Washington Capitals at Heinz Field in Pittsburgh in the 2011 classic.

The success of the 2008 Winter Classic led the NHL to schedule a second one for 2009.

Held at Wrigley Field in Chicago, the New Year’s Day contest matched the Detroit Red Wings against the Chicago Blackhawks.  The game had the highest American television ratings of any hockey game in 33 years.

Since the inaugural game at Ralph Wilson Stadium in 2008, the Winter Classic has visited Nationals Park, Busch Stadium and Fenway Park.  It has been held on rinks set up in the football homes of the New England Patriots and the University of Michigan Wolverines, and last year was held at Citi Field in Queens, New York.

In 2014, SportsBusiness Journal named the Winter Classic its “Sports Event of the Year.”  Played at Michigan Stadium in Ann Arbor, the game featured the Red Wings and the Toronto Maple Leafs.  The event set two NHL records.  The 105,491 patrons that filled The Big House set an attendance record, while the 8.2 million television viewers in the U.S. and Canada made it the most-watched regular season hockey game in history.

The National Hockey League has done a yeoman’s job in staging the ten Winter Classics played prior to today.  Everything about the game screams old school.  In addition to the league building outdoor rinks in some of America’s most spectacular venues, teams are bedecked in throwback uniforms – and sometimes wear eye black.  Players don stocking caps when off the ice, while coaches sport retro-style letterman jackets from behind the benches.

The game’s popularity in the U.S. has led to the American Hockey League adding an outdoor game.

The success of the NHL Winter Classic bred the playing of outdoor hockey at the college, minor league, and junior hockey levels.  The New Year’s Day game is not as popular in Canada, however.  Of the eleven teams that have played in the Winter Classic to date, only two – the Maple Leafs and Montreal Canadiens —  are Canadian franchises.  The January 1 games produce lower ratings north of the border than do weekly regular season telecasts of Hockey Night in Canada.

The Blackhawks have the most Winter Classic appearances, with three.

Clearly not an outdoor team, the Hawks have lost them all.  The Rangers and Capitals are each 2-0 in Winter Classics.  Other teams to appear on New Year’s Day include the Bruins, Red Wings, Penguins, Sabres, Maple Leafs, and Montreal Canadiens.

The eleventh edition of the Winter Classic gets underway today.

The Blackhawks will be making a record fourth appearance, and play host to the Boston Bruins in an Original Six matchup.  This is the Bruins third January 1 classic and is the first NHL hockey game to be played at iconic Notre Dame Stadium.  Coverage begins at 1 p.m. ET on NBC.