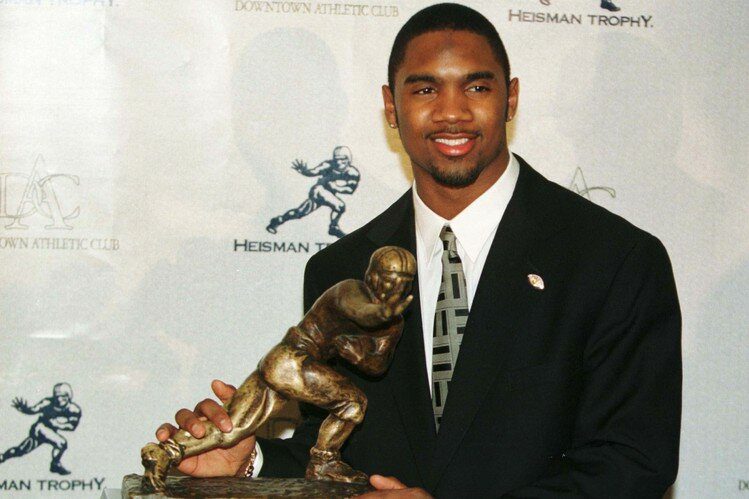 Charles Woodson is the only player in National Football League history to record 50 interceptions and 20 quarterback sacks in a career.

Born in Fremont, Ohio—home of former U.S President Rutherford B. Hayes and “Cutlery Capital of the World”—on October 7, 1976, he attended Ross High School, where he competed in football, basketball and track.  Woodson earned two varsity letters as a point guard, was a sprinter and long jumper and excelled as a standout running back in football for the Little Giants.  He set school records for rushing yards and scoring—including 230 points in his senior year—and was named “Mr. Football” in the football-rich state of Ohio while earning USA Today and Parade All-America honors.  Woodson was heavily recruited as a running back but chose the University of Michigan, the only school that coveted him as a defensive back, emerging as a starter in the second game of his freshman year.  As a true freshman, he led the Wolverines in interceptions, made All-Big Ten and was voted as the conference’s Freshman of the Year, an honor Orlando Pace [Daily Dose, November 4], a Sandusky native, had earned the previous year.  The following season, Woodson was named national Defensive Player of the Year and All-America.  After leading Michigan to the national title as a junior, Woodson was awarded the Heisman Trophy–receiving 282 more voting points that runner-up Peyton Manning—while becoming the first primarily defensive player to win the award.  Woodson also earned All-America and Defensive Player of the Year honors for the second consecutive year while winning the Jim Thorpe Award as the top defensive back in college football.  Following his junior season, Woodson declared himself eligible for the NFL draft. The Oakland Raiders selected Woodson with the fourth overall pick of the 1998 NFL Draft, two spots behind Washington State’s Ryan Leaf.  He became the first rookie Raider since 1971 to start every game, was named NFL Defensive Rookie of the Year and earned a trip to his first Pro Bowl.  He played in every game during his first four seasons before missing eight games in 2002.  The following year, he led Oakland to the Super Bowl, recording an interception in a loss to the Tampa Bay Buccaneers.  In April 2006, Woodson signed a 7-year, $ 52 million contract with the Green Bay Packers before leading the NFC with eight interceptions that year.  In 2009, he became the first player in NFL history to have a sack, two forced fumbles and an interception in the same game in route to being named Defensive Player of the Year.  The following season, he was named co-captain and led the Packers to a win over the Pittsburgh Steelers in Super Bowl XLV.  In 2011, he intercepted his 50th career pass, which he returned for a touchdown to record the 11th “pick six” of his career—second most of all-time.  Woodson moved to safety in 2012, his final year in Green Bay, before signing with Oakland the next year.  He scored on a fumble recovery to tie the NFL record for defensive touchdowns [13] in 2013, and, at 37 years of age, played in 1,067 of 1,074 possible defensive snaps.  Mr. Woodson played his final three seasons in Oakland before retiring after the 2015 campaign. Charles Woodson is one of the greatest football players of all time.  He is one of the finest high school players in Ohio history, is on the “Mount Rushmore” of University of Michigan football [along with Tom Harmon, Desmond Howard, Anthony Carter], and will surely be elected to the Pro Football Hall of Fame on the first ballot when eligible in 2020.   In 18 NFL seasons, Woodson played in nine pro bowls, two Super Bowls, twice led the league in interceptions and was a two-time Defensive Player of the Year.  He helped the Green Bay Packers to a world championship in 2010, led the Oakland Raiders to the 2002 AFC Championship and was voted to the NFL’s 2000s All-Decade Team.  Mr. Woodson scored 13 defensive touchdowns, forced 28 fumbles, intercepted 65 passes and had over 1,000 tackles during his brilliant career.  His superb skills, high football IQ and great physical conditioning allowed him to perform at the highest level late into his career.  In 2013, he posted a career-best 97 tackles.  The following year—at age 38—he had 112 tackles.  Mr. Woodson is one of three players in NFL history to record an interception after their 38th birthday and, in October 2015, became the oldest player to intercept two passes in a single game.  He is an oenophile and partner in Charles Woodson Winery, proud bottler of “Twentyfour,” whose 2009 Cabernet Sauvignon features “bold expressions of powerful fruit” that are “balanced by layers of coffee, cocoa and violet while sultry notes of chocolate covered cherries, vanilla and sweet oak dance with cassis and hints of smoke.” In 2013 and 2014, Charles Woodson was the recipient of the Commitment to Excellence Award, given to the Raider who best exemplifies hard work, leadership and excellence on and off the field throughout the season.  Mr. Woodson has announced that, if he is elected into the Pro Football Hall of Fame, he will go in as a Raider.]