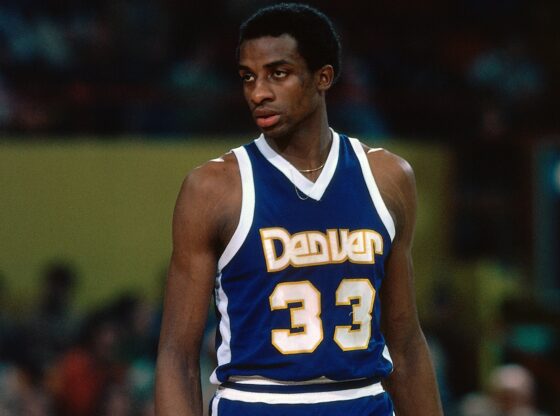 David Thompson is the only player in history to be named MVP of both the ABA and NBA All-Star Games.

One of the greatest players in college basketball history, Thompson was one of the sport’s original high flyers.  “He was Michael Jordan before there was Michael Jordan,” said hall-of-fame coach Larry Brown, who coached Thompson for five pro seasons with the Denver Nuggets.  The 6’4” swingman had a 44-inch vertical leap and could snag a quarter off the top of the backboard, yet he never once dunked a basketball in 86 college games.  The best player ever to wear a North Carolina State uniform, Thompson led the Wolfpack to their first NCAA championship, in 1974.  He was Atlantic Coast Conference Player of the Year in all three of his varsity seasons, was a two-time AP Player of the Year, and three-time First Team All-American.

The first overall pick of both the NBA and ABA drafts in 1975, Thompson became, at 23, the highest-paid athlete in the history of team sports after signing a four-year, $ 5 million deal with the Nuggets in 1978.  He played nine professional seasons and was named 1976 ABA Rookie of the Year.  “Skywalker” was the prince of mid-air.  “David Thompson changed the game forever,” said Jordan, who idolized Thompson as a kid and chose him as his presenter at the former Chicago Bulls’ induction ceremony into the Naismith Hall of Fame in 2009.  Thompson was MVP of the 1976 ABA All-Star Game, where he finished second to Julius Erving at the show that started it all – the first-ever Slam Dunk Contest.  Three years later, he was named MVP of the 1979 NBA All-Star Game.

Thompson is one of six players to score 70 or more points in an NBA game, a feat neither Jordan or “Pistol” Pete Maravich ever accomplished in their legendary high scoring careers.  In April 1978, he dropped 73 on the Detroit Pistons.  After pouring in 51 first-half points, Thompson sat out much of the third and fourth periods.  It remains the fourth-highest single-game point total in NBA history.  Thompson averaged 26 points per game for the ABA Nuggets in 1975-76.  Denver was absorbed by the NBA the following season, and Thompson spent six more years in the Mile High City.  He finished his career in Seattle, spending two seasons with the SuperSonics [now Oklahoma City Thunder] before retiring in 1984.  In eight NBA seasons, Skywalker averaged 22 points per game.

Born in Shelby, North Carolina – hometown of hall of fame linebacker Bobby Bell – on this date in 1954, David O’Neil Thompson was one of 11 children born to a Baptist minister father and mother who worked as a maid.  He attended Crest High School, where he played four years of varsity basketball and became known as the “Sweetheart of Tobacco Road.”  The high-flying Thompson was heavily recruited, particularly in the basketball-rich Atlantic Coast Conference, and decided to take his talents 200 miles east to Raleigh and play for Norm Sloan at North Carolina State.  After averaging nearly 36 points per game to lead the freshman team in scoring [frosh were ineligible to compete in varsity sports until 1972], Thompson joined the varsity for the 1972-73 season.

North Carolina State was on probation and unable to participate in the 1973 postseason due to alleged violations that occurred during the recruitment of David Thompson.  The NCAA – one of the most corrupt and incompetent organizations in sports – ruled the Wolfpack ineligible after finding they had allowed Thompson to stay in a dorm during a basketball camp, that he and some other recruits had played in a pickup basketball game with an N.C. State assistant, and that Thompson had received rides from the coaching staff.  “It should have been a slap on our hand,” said Wolfpack center Tom Burleson, who felt the punishment was overly harsh.  Playing with a chip on their shoulder, the Wolfpack finished the season 27-0 then stayed home and watched the UCLA Bruins win their seventh consecutive NCAA championship.

The ‘Pack entered the 1973-74 campaign with something to prove.  In a pre-conference game in December, N.C. State was mauled by the Bruins, 84-66, on a neutral court in St. Louis.  It proved to be their only loss over two seasons.

College basketball was a much different sport in 1973-74 than it is today.  There was no three-point line or shot clock, and “one-and-done” did not exist.  Dunking was outlawed and only conference champions were invited to the 25-team NCAA tournament.  Maryland finished the season ranked fourth in the nation but, due to a 103-100 overtime loss to N.C. State in the ACC tournament, was not invited to NCAA tourney.

Seeking redemption for the drubbing they had received in December, N.C. State and UCLA squared off in the 1974 national semifinal.  Led by Bill Walton and Keith Wilkes, John Wooden’s defending national-champion Bruins had won nine of the previous ten NCAA titles.  Riding a tournament win streak of 38 games, UCLA had not lost in the postseason since 1963.  Led by Thompson, the Wolfpack rallied from five down to send the game into overtime, then overcame a seven-point deficit late in the second overtime to beat the seemingly unbeatable Bruins, 80-77, in one of the greatest college basketball games every played.  Sports Illustrated ran a cover of Thompson leaping over Walton entitled “End of an Era.  N.C. State Stops UCLA.”  Two days later the Wolfpack topped Marquette, 76-64, in a game that seemed almost anticlimactic.

After shooting 55 percent from the floor and averaging 26 points with eight rebounds per game, Thompson was named 1974 College Player of the Year.  In two varsity seasons, he led N.C. State to a 57-1 record, still the best two-year run in ACC history.  “You were watching a guy that pretty much was able to do anything on a basketball court,” recalled teammate Tim Stoddard, who guarded Thompson during practice and later pitched in the major leagues for 11 seasons.  “It was kind of phenomenal.  He was such a tremendous athlete.”

The Wolfpack finished 22-6 in Thompson’s senior year but failed to make the NCAA tourney after finishing fourth in the ACC.  After garnering numerous Player of the Year honors, Thompson chose the ABA’s Nuggets over the Atlanta Hawks of the NBA, who had made him the first overall pick of the 1975 NBA Draft.  Thompson made quite a splash in the ABA, leading the Nuggets to a 60-24 record and berth in the Finals, where they lost to Erving and the Nets in seven games.  He earned 1976 Rookie of the Year honors and a spot on the All-Star team before the league folded after the season.  Despite playing in the ABA for only one season, Thompson was elected to the league’s All-Time Team in 1997.  Thompson played in four NBA All-Star Games with the Nuggets before being dealt to the Sonics in 1982.

David Thompson may be the most underachieving hall-of-famer ever to play basketball.  Drug and alcohol addiction marred his last pro seasons, and a fall down a flight of stairs at Manhattan’s infamous Studio 54 nightclub prematurely ended his all-too-brief career.  Thompson finally got clean and sober, then returned to North Carolina State to finish his degree in sociology.  Nearly three decades after playing his last game with the Wolfpack, Mr. Thompson shared the stage with his daughter Erika when the two graduated together in December 2003.  Thompson was elected to the NCAA 1970s All-Decade Team, is a member of the N.C. State Hall of Fame, and was named one of the “50 Greatest Players in ACC History.” Thompson’s “44” is the only number ever retired by N.C. State and the Nuggets retired his Number 33 in 1992.  In 1996, one of the most electrifying players ever to play basketball was elected to the Naismith Memorial Hall of Fame. 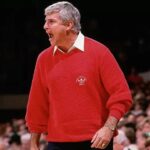