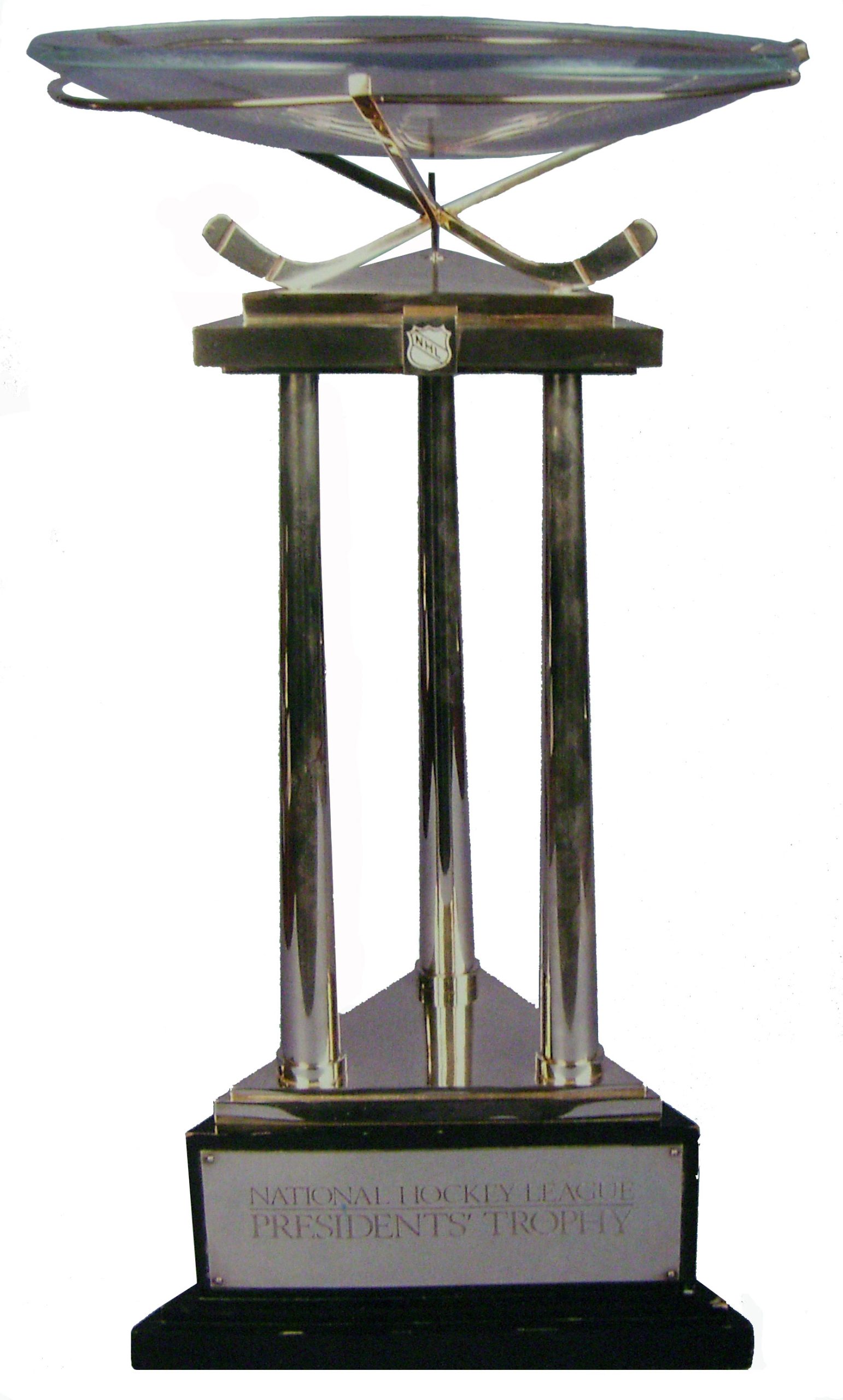 The President’s Trophy goes to the team with the best NHL regular season record.  It may be the sport’s biggest curse.

Awarded annually by the NHL Board of Governors since 1985-86, the winner receives the trophy — along with $ 350,000, to be split between team personnel and the players.

In ice hockey, points are awarded to assess standings.  For winning a game, a team always earns two points in the standings, whether they win in regulation or overtime.  When a team ties or loses in overtime, they earn one point.  In the NHL, if two or more teams are tied in points after the regular season, the first tiebreaker is the team that has the most wins, whether regulation or overtime victories.  And to that winner goes the President’s Trophy.

Hockey loves trophies more than any other sport.  While baseball has the Cy Young Award, the NBA doles out its Sixth Man of the Year, and pro football names its Most Improved Player, the NHL hands out trophies.  And lots of them.  The Vezina Trophy goes to the league’s top goaltender.  Rookie of the Year gets the Calder.  The regular season MVP earns the Hart Trophy, while the MVP in the Stanley Cup Playoffs gets the Conn Smythe.  The Art Ross goes to the top point scorer, yet the leading goal scorer garners the Maurice Richard Trophy.  The NHL player who best exhibits sportsmanship, gentlemanly conduct and a high standard of play earns the Lady Byng Trophy.

The Trophee des presidents has been awarded 32 times to 16 different teams since its inception.  The first winners were the 1985-86 Edmonton Oilers, who finished with 119 points.  Led by Wayne Gretzky, the Oilers won their division for the fifth consecutive season and were heavy favorites to win their third straight Stanley Cup, but were defeated by the Calgary Flames in the second round.  The following season, Edmonton again won the President’s Trophy while also claiming the Stanley Cup.  Other back-to-back winners of the President’s Trophy include the Calgary Flames, Detroit Red Wings, Dallas Stars, Vancouver Canucks and Washington Capitals.

The Red Wings [six] are the only franchise to win the trophy more than three times.  The New York Rangers and Washington Capitals are second, with three each.  Detroit is also the only franchise to win the trophy in back-to-back seasons more than once, compiling the NHL’s best record in 1995 and 1996, then again in 2004 and 2006 [the trophy was not awarded in 2005 due to the NHL lockout].

Three President’s Cup winners failed to make the playoffs the following season.  The Rangers, Buffalo Sabres and Boston Bruins all failed to qualify for the postseason just one year after compiling the best record in hockey.  At the start of this century, the NHL featured teams with the best record in both the regular and postseasons in back-to-back years.  In 2001, Joe Sakic and Ray Bourque led the Colorado Avalanche to the President’s Trophy and the Stanley Cup in the same season.  The following year, Detroit pulled off the double.

The reigning President’s Trophy winners are the Nashville Predators.  The Preds made the Stanley Cup Finals for the first time in 2017, where they lost to Pittsburgh in six games.  Last season, Nashville clinched its first division title in history while compiling the best record in the NHL.  Unfortunately for Music City and its fans, the holders of the 2018 President’s Trophy were bounced from the playoffs in the second round by the Winnipeg Jets.

Prior to the President’s Trophy, the best team in the league during the regular season was allowed to hang a banner reading NHL League Champions.  Since the inception of the trophy in 1986, the winner that collected the fewest points in a full regular was the 1990 Boston Bruins, with 101 points.  The record for most points belongs the 2016 Washington Capitals, who earned 120  – but failed to make it past the second round of the playoffs.

The Montreal Canadiens are the winningest team in NHL history.  The Canadiens have hoisted the Stanley Cup a record 24 times.  The Habs, however, have never won a President’s Trophy.  Despite winning Cups in both 1986 and 1993, Montreal did not collect the most regular season points in either of those years [they have been runners-up three times].

The Pittsburgh Penguins have won five Stanley Cups since 1991, yet have only earned one President’s Trophy.  Led by Super Mario – the great Mario Lemieux — the 1992-93 Pens won an NHL-record 17 straight games to compile the best record in the league.  Despite a roster that featured five 30-goal scorers and four who tallied 100 points, the Pens lost in the 1993 division finals to the New York Islanders.

Is the President’s Trophy cursed?  Only eight winners have gone on to win the league championship, while six have been eliminated in the first round of the Stanley Cup Playoffs.  Often, the team with the league’s best record comes from a weak division, piling up wins against inferior competition.  More importantly, no sport has a second season like the NHL, where regular season performance has little bearing on what happens in the playoffs.  Along with March Madness, the NHL features the most exciting, unpredictable postseason tournament in sports.  For proof, we need to go no further than 2017, when 16th-seeded Nashville – the last team to qualify for the playoffs – made the Stanley Cup Finals.