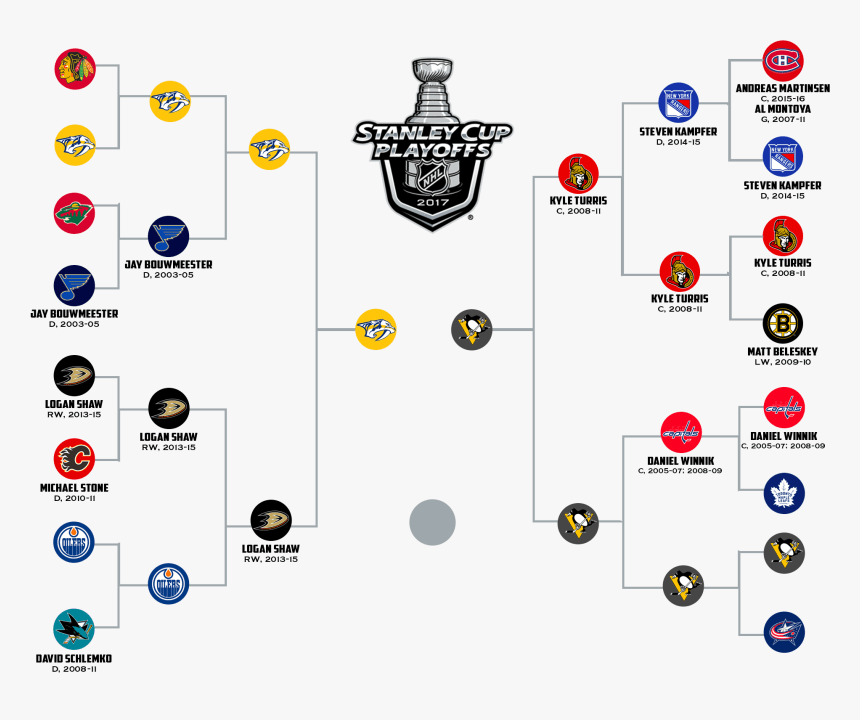 The Stanley Cup playoffs is one of the most exciting spectacles in sports.

The NHL’s post-season is the most unpredictable of the four major North American sports leagues.  The Stanley Cup playoffs is a season unto its own.  Come playoff time, what happened in the regular season no longer matters.  The style of play changes, and upsets abound.  While the “reverse sweep” – coming back from an 0-3 deficit in a seven-game series —  has never happened in the NBA and only once in MLB [2004 Boston Red Sox over the New York Yankees], it has occurred four times in the NHL.

Since 1985-86, the President’s Trophy has been awarded to the team finishing with the most points during the regular season [a team earns two points for a win and one point for a tie or making it to overtime].  The winner is guaranteed home ice advantage throughout the playoffs.  The President’s Trophy has little bearing on post-season success.  In the 32-year history of the award, only eight teams have finished with the league’s best record and won the Stanley Cup in the same season.  Six President’s Cup winners, including the 2012 Vancouver Canucks, were bounced from the playoffs in the first round.

Donated in 1892 by Lord Stanley of Preston, the Governor General of Canada, the Stanley Cup is awarded annually to the NHL champion.  It is the oldest and most recognized trophy in professional sports.  Originally awarded in 1893 as the Dominion Hockey Challenge Cup, the inaugural trophy went to the Montreal Hockey Club of the Amateur Hockey Association of Canada.  After 1926, the Stanley Cup became the championship trophy of the NHL.

From 1942 to 1967, the league’s six teams – the Original Six – vied for North America’s premiere team sports trophy.  After the 1967 expansion – when the NHL doubled in size with the Next Six – two conferences were formed, with conference champions meeting in the Finals.  There were two years when the Stanley Cup was not awarded:  1919, because of the Spanish flu epidemic, and 2005, due to the NHL lockout.

Made of a silver and nickel alloy, Lord Stanley’s Mug stands 32.25 inches tall and weighs just under 35 pounds.  Unlike the trophies of the three other major sports leagues in North America, a new Stanley Cup is not made annually.  The champions keep the Cup until a new champion is crowned, then pass it along.  There are actually three Stanley Cups: the original bowl of the Dominion Hockey Challenge Cup, the authenticated Presentation Cup – which is presented to the Finals winner — and the Replica Cup on display at the Hockey Hall of Fame.

Hockey’s Holy Grail is engraved with the names of the winning players, coaches, management and club staff.  In 1958, a modern one-piece Cup was designed with a five-band barrel which contains 13 winning teams per band.  To keep the Cup the same size, the bottom band is removed when full and preserved in the Hockey Hall of Fame.  A new band is then added to the bottom.

The most traveled championship trophy in the world, the Cup has logged more than 500,000 miles in the past decade alone.  It is the centerpiece of several legends and traditions.  Winners drink champagne from the top bowl of the Cup.  After the final series ends, the majestic trophy is presented to the captain of the winning team.  He holds it aloft while skating around the rink, then passes it to a teammate who does the same.  It is customary for each member of the winning team to take a lap around the ice while hoisting Lord Stanley’s Cup.

The Stanley Cup playoffs are steeped in tradition.  At the completion of each series, opposing players line up and shake hands.   “You shake the hand to say, ‘Hey, great job,’ said Detroit Red Wings Matt Cooke.  ‘We’ve pushed each other to the limit.  There’s no more games.’”

During their dominant era in the early 1980s, the New York Islanders began the practice of not shaving during the playoffs.  The tradition continues today, as players don’t shave until their team is eliminated or wins the Stanley Cup.  Playoff beards are macho.  The postseason is eight weeks long, making the Finals a hairy affair for both teams.

In 1988, Wayne Gretzky gathered the world champion Edmonton Oilers at center ice for an impromptu team photo with the Stanley Cup.  A tradition was born, and the iconic on-ice photo has become an annual event.

It is common not to touch or hoist the conference champion trophy [Prince of Wales Trophy in the East, Clarence Campbell Bowl for the West] after a team has won the Conference Finals.  Hockey players are superstitious, and all eyes are on the real prize – the Stanley Cup.  One player who does not adhere to this practice is Sidney Crosby.  The Pittsburgh Penguins captain raised the Prince of Wales Trophy in 2009, 2016 and 2017.  In each instance, the Pens went on to win the Cup.

The Conn Smyth Trophy goes to the MVP of the entire postseason, not just the Finals.  Named after Conn Smythe, the longtime owner, general manager and head coach of the Toronto Maple Leafs, the trophy has been awarded 52 times since its inception in 1965.  Jean Beliveau was the first winner.  Hall-of-Fame goaltender Patrick Roy has earned a record three Conn Smythe trophies, and is the only player to be named playoff MVP with two different teams.  The Conn Smythe Trophy has never gone to a player that did not reach the Finals.

The Montreal Canadiens have appeared in the playoffs in 86 seasons, more than any other club.  Les Habitants have won the Stanley Cup a record 24 times, and made the Finals an additional ten times.  The Boston Bruins, the United States’ first and oldest NHL franchise, have made 71 playoff appearances, followed by the Toronto Maple Leafs, with 67.  One of the Original Six, the Detroit Red Wings have won 11 Stanley Cups, most of any U.S.-based NHL team.

The 2018 Stanley Cup Finals are currently underway.  The Las Vegas Golden Knights are taking on the Washington Capitals.  Game 5 is scheduled for Thursday, June 7, and will be televised live by NBC Sports, now in the seventh year of a ten-year contract covering the NHL postseason.  Puck drop is 8:00 p.m. ET with Doc Emrick, Eddie Olczyk and Pierre McGuire – the best trio in all of sports broadcasting – calling the action from T-Mobile Arena in Las Vegas.