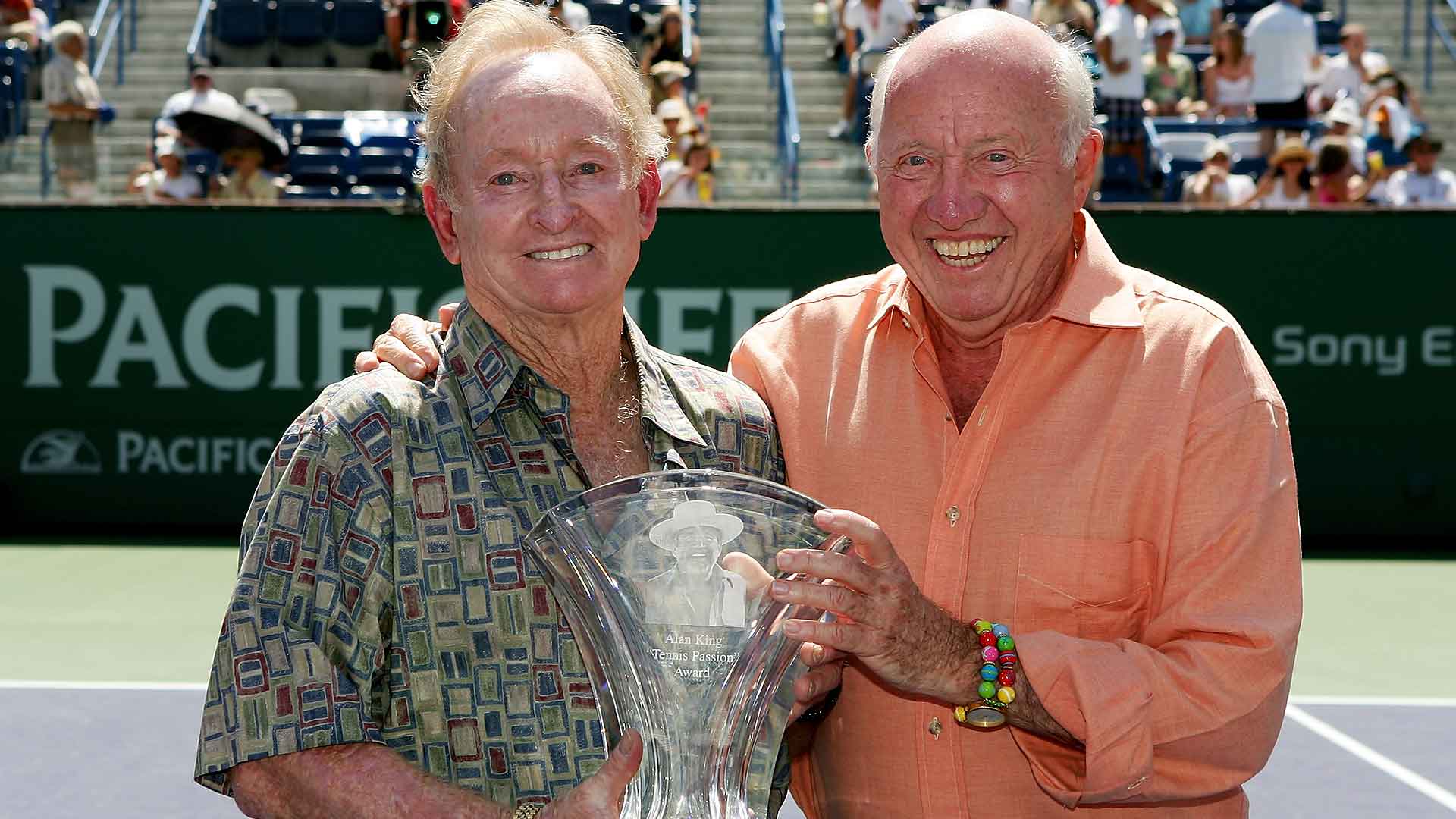 Few have done more to elevate tennis in America than Bud Collins.

A legendary writer and broadcaster, Collins was a giant in the tennis world.  He had a deep love of the game and provided the sport with its most authoritative voice.  A walking encyclopedia of tennis, Collins never took himself too seriously.  He was zany and irrepressible, yet unfailingly dignified.  The affable Collins had a reverence for the traditions he loved and disdain for anything he regarded as pompous or stodgy.

“There isn’t another American journalist so identified with his sport as Bud is with tennis,” wrote Frank Deford in Sports Illustrated in 2007.  “He is the very soul of the game – as a historian, as authority, as devotee, as enthusiast.”

Collins was the face of tennis in the U.S.   His impact on the game may have been greater than that of any competitor.  Collins covered the U.S. Open for CBS from 1968 through 1972, then worked for NBC for 35 years.  Players found comfort in seeing Bud Collins as they came off the court following a match.  Wearing a reassuring and infectious smile, he had the gravitas to empathize with the loser, graciously congratulate the winner, and handle the entire matter genially.

Like the late Craig Sager, Collins wore garish clothing.  And, like Sager, he was beloved in his sport.  “He was as colorful as his trousers, which were his signature,” said Dick Enberg, whose work alongside Collins made Breakfast at Wimbledon destination viewing.  “Yet it was really misleading to the average fan.  That was his M.O. for television.  In person, he was the quietest guy in the room.”

Although he called himself a “hack,” Collins was a talented player, winning the U.S. Indoor Mixed Doubles alongside Janet Hopps in 1961.  He was also, with Jack Crawford, a finalist in the French Senior Doubles in 1975.  Collins coached tennis at Brandeis University, where one of his players was future political activist Abbie Hoffman.  The 1959 squad was the only undefeated tennis team in Brandeis history.

Arthur Worth Collins Jr. was born June 17, 1929, in Lima, Ohio.  He grew up in nearby Borea, where his father was the athletic director at Baldwin-Wallace College.  Collins attended Baldwin-Wallace, where he played tennis and worked on the student newspaper.  He graduated in 1951, served in the Army, than moved to Boston to pursue a graduate degree in journalism at Boston University.  Collins went to work for the Boston Herald in the late 1950s as a sportswriter.  In 1963, he joined the more prestigious Boston Globe, where he remained for most of his life.

Collins made his debut as a tennis commentator in 1963, calling the U.S. National Doubles Championships from Brookline, Massachusetts.  In addition to tennis, he covered boxing and wrote about politics and the Vietnam War.  For 25 years, he had a travel column in the Globe.

Mr. Collins, who was inducted into the National Sportscasters and Sportswriters Hall of Fame in 2002, was a media trailblazer.  He was among the first major sportswriters to transition to television, paving the way for Lesley Visser, Peter Gammons, and Chris Mortenson, among others.  A fundamentally decent man, Collins helped launch many journalism careers.  His nimble brain was a reservoir of knowledge.

Enberg followed tennis only casually before NBC first sent him to cover Wimbledon in 1979.  Unsure of his tennis expertise, he quickly found a friend in Bud Collins.  “I might be rehearsing or maybe on my first take and he’d say, ‘No, no, that’s not what a tennis reporter would say.  Here’s what you really mean.’ Enberg recalled. “He could have just let me go.  But he didn’t allow that.  Bud wanted tennis to be represented properly.”

In his wonderfully effusive manner, Collins often gave players fanciful nicknames that captured their style of play.  Chris Evert was “The Ice Maiden.”  Bjorn Borg became the “Angelic Assassin.”  The Williams sisters, Venus and Serena, were the “Sisters Sledgehammer.”

A masterfully entertaining fellow, Collins was a serious student of the game.  He covered the sport he loved for over five decades and wrote his way into the International Tennis Hall of Fame.  Collins published several books, including autobiographies on both Rod Laver and Evonne Goolagong.  His epic – The Bud Collins History of Tennis – is the history of the sport.  In 1999, Collins received the Red Smith Award, the nation’s highest sportswriting honor.  In September 2015, the USTA fittingly renamed the U.S. Open pressroom the Bud Collins Media Center in recognition of his years of service to tennis.

Mr. Collins, widely considered the country’s leading voice and foremost authority on tennis, died at his home in Brookline, Massachusetts, March 4, 2016.  He was 86.

The President’s Trophy – Award? Or Curse?
The Wisdom of John Wooden