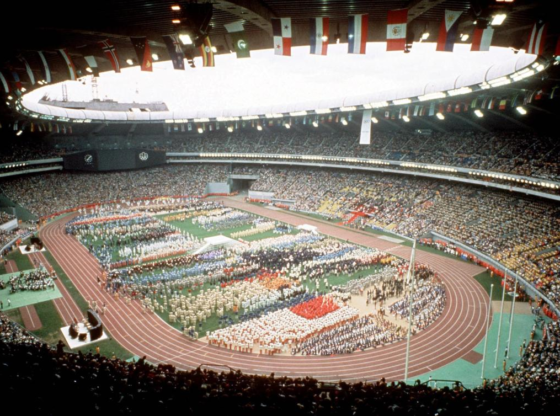 “The Olympics can no more run a deficit than a man can have a baby” — former Montreal mayor Jean Drapeau, after his city was awarded the 1976 Olympics. The 1976 Olympics were the first and only Summer Games to be held in Canada [Calgary and Vancouver later hosted the Winter Games in 1988 and 2010, respectively]. Although the Games featured several iconic athletic performances, they were a financial disaster, as lavish spending by the city of Montreal left the citizens of Canada and Quebec with a tax debt they would be repaying for years. Four years after the massacre in Munich, the International Olympic Committee hoped for an Olympic revival at Montreal in 1976. The French-speaking city had been selected over Toronto by the Canadian Olympic Committee as Canada’s representative to bid on the Games. During the 69th session of the IOC held in Amsterdam in May 1970, Montreal was selected over Moscow and Los Angeles, whom would host the two subsequent Olympiads. After successfully hosting the World’s Fair in 1967, Montreal was supremely confident in its ability to stage an international spectacle. The centerpiece for the Games was Olympic Stadium, the Big O. Construction began in April 1973 – 18 months late. Between 1974 and 1976, Quebec labor unions were on strike for 155 of 530 potential work days, nearly 30 percent of the total. Rampant inflation caused the price of structural steel to triple. Montreal was a city on the verge of a nervous breakdown in the weeks before the Olympics. In the run-up to the Games, some 3,000 laborers worked 24 hours a day to finish construction, and many structures were not completed on time. During the opening ceremony, the Queen and Prime Minister of Canada were nearly blocked by construction workers on the ramp leading into the Olympic Stadium. The Canadian press dubbed the 1976 Olympics the “Billion Dollar Circus.” The final bill came in 13 times the original estimate, leaving Montreal with the worst hangover in Olympic history. Canadian citizens were angry and resentful. No Olympics had so broken a city. Security alone cost $ 100 million, more than 80 percent of what the entire event was initially supposed to cost. The Big O had officially become the “Big Owe,” leaving Montreal $ 1.6 billion in debt, a tab that took 30 years to pay. The most cultured city in Canada was left with a creeping sense of social and economic failure, and Montreal for years had to skimp on urban essentials to rid itself of Olympic debt. The first Olympics to be boycotted were the Montreal Games. Nearly 30 African nations refused to participate because the IOC would not ban New Zealand for sending their rugby team to tour apartheid South Africa, in defiance of the United Nations’ calls for a sporting embargo. Four years later, the United States led a 65-country boycott of the Moscow Games because of the Soviet War in Afghanistan. The Soviets responded by leading a boycott of the 1984 Olympics in Los Angeles. The Montreal Games featured more than 6,000 participants from 92 countries. They consisted of 198 events in 23 sports, including the debut of women’s basketball, rowing and team handball. Antonia Real was the youngest competitor at the Games. The 12-year-old Spaniard swam in the 400m and 800m freestyle, but did not medal. The oldest participant in Montreal was Owen Phillips, a 70-year-old shooter from Belize. Mr. Phillips competed in 50-meter prone small bore rifle shooting, finishing in 78th [and last] place. Held July 18 to August 1, the Games of the XXI Olympiad featured some memorable performances. Cuba’s Alberto Juantorena – El Cabello – became the first man to win both the 400m and 800 m run at the same Olympics, while Lasse Viren of Finland repeated his 1972 double win in the 5,000m and 10,000 meters. Fourteen-year-old Nadia Comaneci of Romania became the first person to score a perfect ten at the Olympics, recording seven such scores to win three gymnastics gold medals. Hungarian Miklos Nemeth won the javelin to become the first son of a track and field gold medalist to win a gold of his own. Russian weightlifter Vasily Alekseyev repeated his gold medal performance from Munich while setting Olympic heavyweight records. Another Russian, gymnast Nikolay Andrianov, captured the most medals of any athlete at the Games, with seven. Several Americans excelled in Montreal. Led by captain Gary Hall, who carried the flag during opening ceremonies and was competing in his third Olympics, the U.S. men won all but one gold medal in swimming. USC’s John Nabor paved the way, winning four golds, each in world-record time. Twenty-year-old Edwin Moses burst onto the international scene by setting a world record in the 400m hurdles, while Bruce [now Caitlyn] Jenner set a world record of 8,634 points to capture decathlon gold. Led by Ray Leonard, the greatest Olympic boxing team in U.S. history captured five gold medals. Four of the five went on to become title holders as professionals. Coach Dean Smith restored order by guiding the U.S. men to seven straight wins en route to the gold in the basketball tournament. The victory, although sweet, did not erase the atrocities committed by Olympic officials in the gold medal game in Munich four years earlier. The 1976 Olympics were not without controversy. East German athletes were doped, sometimes without their knowledge, under a program known as State Plan 14.25. Under this cloak of deceit, the East German women won 11 of 13 gold medals. After injecting their athletes with performance-boosting drugs, East German officials dumped their leftover serum and syringes into the Saint Lawrence River. Kornelia Ender won five swimming medals, including four gold, robbing the great Shirley Babashoff and other clean athletes their fair shot at Olympic glory. The IOC has yet to provide a proper remedy for the injustices that took place in Montreal’s newly-constructed Olympic pool. In the aftermath of the 1976 Games, top officials and contractors were convicted of fraud and corruption, including Montreal mayor Jean Drapeau. To add insult to injury, Canada became the first [and only] host nation to fail to win a gold medal on its home soil. The retractable roof promised for Olympic Stadium was never completed, making the Big O an unsuitable home for their full-time tenant, the Montreal Expos. The Expos played their last MLB game in Montreal in 2004 before bolting to Washington, D.C. and becoming the Nationals. Although beautiful, the Velodrome was a white elephant that was of little use after the Olympics. It has since been converted into an indoor zoo. The Claude-Robillard Sports Complex, which hosted water polo and handball at the ’76 Games, is now a high-performance training center for a number of sports. The Olympic Village – Village Olympique – a two-building pyramid built at three times its original estimate, was converted into a rental apartment building that includes almost 1,000 units. On this date in 1976, the opening ceremony of the Games of the XXI Olympiad was held in Montreal. At 3 pm on a Saturday afternoon, 73,000 spectators filled the Olympic Stadium and an estimated half billion more watched on television as Elizabeth II, Queen of Canada, arrived to a trumpet fanfare. The Montreal ceremony would be the last of its kind, as future Olympic openings became grand theatrical productions, doing away with the traditional formality and protocol that had previously marked the commencement of the Games.