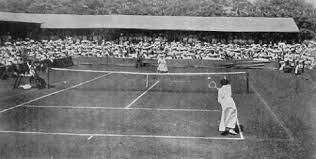 The Wimbledon Championships is the oldest and most prestigious tennis tournament in the world.

First held in 1877, the tournament is one of the world’s oldest sporting events.  Formally called “The Championships, Wimbledon,” it gets its name from where it was first played, in the suburbs of London.  The Championships has been held at the All England Club in Wimbledon since the tournament’s inception.  Along with the Australian, French and U.S. Opens, Wimbledon is one of four annual Grand Slam tournaments and is the only one played on grass.  It is the granddaddy of tennis, predating the U.S. Open by four years, the French by 14 years, and is 28 years older than the Australian Open.  Since the inaugural Championships in 1877, Wimbledon has grown from its roots as a garden party tournament to a Grand Slam event that is followed by millions around the world.

The Championships takes place over two weeks in late June and early July.  It is the third Grand Slam event of the year, starting three weeks after the French Open concludes in Paris and seven weeks before the U.S. Open gets underway in New York City.  The fortnight includes five main events, four junior events and seven invitation events.  The Ladies’ and Gentlemen’s Singles Finals – the most prestigious titles in tennis – are scheduled for the second Saturday and Sunday of July, respectively.

The first lawn tennis championship held at Wimbledon got underway July 9, 1877.  It consisted of just one event — Gentlemen’s Singles – and was played on grounds situated off Worple Road in Wimbledon.  Twenty-two amateurs registered, but only 21 showed, and 200 spectators paid one shilling each to attend.  Eleven survivors were reduced to six the next day, then to three.  Over the weekend, the tournament was suspended so the patrons could attend the Eton – Harrow cricket match.  The inaugural final, scheduled for July 16, was rained out before resuming on the following day.  Wimbledon’s first winner was Spencer Gore, who took home the 25-guinea trophy.

Wimbledon added Ladies’ Singles and Gentlemen’s Doubles in 1884, and Maud Wilson was the first Ladies’ Singles champion.  Thirty-Six years later, Ladies’ Doubles and Mixed Doubles were added to the Championships.  Until 1922, the defending champion had only to play the final round and defeat the challenger – who had played through the entire tournament bracket —  in order to retain the title.  This approach, which produced many repeat winners, was changed in 1923 when byes were eliminated.

All singles finals are contested at Centre Court, the most famous tennis venue in the world.  So named because it is situated in the middle of the grounds, Centre Court has seating capacity for 15,000 spectators.  It includes the Royal Box, reserved exclusively for the Royal Family and other distinguished guests.  Players bow or curtsy to HRH The Prince of Wales or Her Majesty the Queen whenever they are present in the box.  Centre Court and No. 1 Court [with seating for 11,000, the second-largest venue at Wimbledon] are only used during The Championships, while the remaining 17 courts are used by The All England Club for play throughout the year.  During the fortnight of The Championships, the grounds open at 10:30 am daily.  Play starts at 1 pm, with the exception of the singles finals, which begin at 2 pm.

Like the Masters golf tournament, Wimbledon is notable for the absence of sponsor advertising on the grounds.  The Championships have many long-standing traditions, including a strict dress code for competitors and the eating of strawberries and cream by the patrons.  The lawns have remained relatively unchanged through the years.  Since 2001, the courts are sown with 100 percent perennial ryegrass, a hearty strain with superb durability.  To reduce delays caused by inclement weather, a retractable roof was installed over Centre Court in 2009.  Since the inaugural Wimbledon matches in 1877, the rules of tennis have changed the height of the net and distance of the line of service from the net.

In the 130-year history of Wimbledon, three men have each won seven singles titles.  William Renshaw, who competed between 1881 and 1889, won five of his titles when defending champions were still awarded byes.  Pete Sampras and Roger Federer won their titles during the Open Era.  Federer is the only player in history to reach the Wimbledon Finals ten times.  Bjorn Borg, who won five straight singles titles between 1976 and 1980, is the only man in history to win Wimbledon without losing a single set in the entire tournament, which he did in 1976.  Mr. Borg’s winning percentage of 92.72 is also the best in the history of The Championships.

The winners of the 2017 singles events — both Ladies’ and Gentlemen’s — will receive £ 2 million [over $ 2.5 million], while runners-up will earn £ 1 million [nearly $ 1.3 million] from a total purse of £ 14,840,000.  The Gentlemen’s winner is presented a silver gilt cup, awarded since 1887, inscribed All England Lawn Tennis Club Single Handed Championship of the World.  The Ladies’ winner receives a sterling silver salver known as the Venus Rosewater Dish, which is 18.75 inches in diameter and is decorated with figures from mythology.  Both trophies stay at the club.  Winners go home with reduced-sized replicas.

Ball boys and girls, known as BBGs, keep the play at Wimbledon flowing.  Seven Hundred applicants vie for 250 positions for the tournament.  Selected from local schools in southwest London, these unsung heroes – with an average age of 15 — earn about £ 200 for a fortnight’s work.  BBGs must pass a written test on the rules of tennis, undergo rigorous physical training which includes squat thrusts, lunges and jumping, and are required to master rolling tennis balls along the ground.  The All England Club mandates that BBGs “should not be seen.  They should blend into the background and get on with their jobs quietly.”

The 131st edition of the world’s most important tennis championship gets underway today at the All England Club outside London.