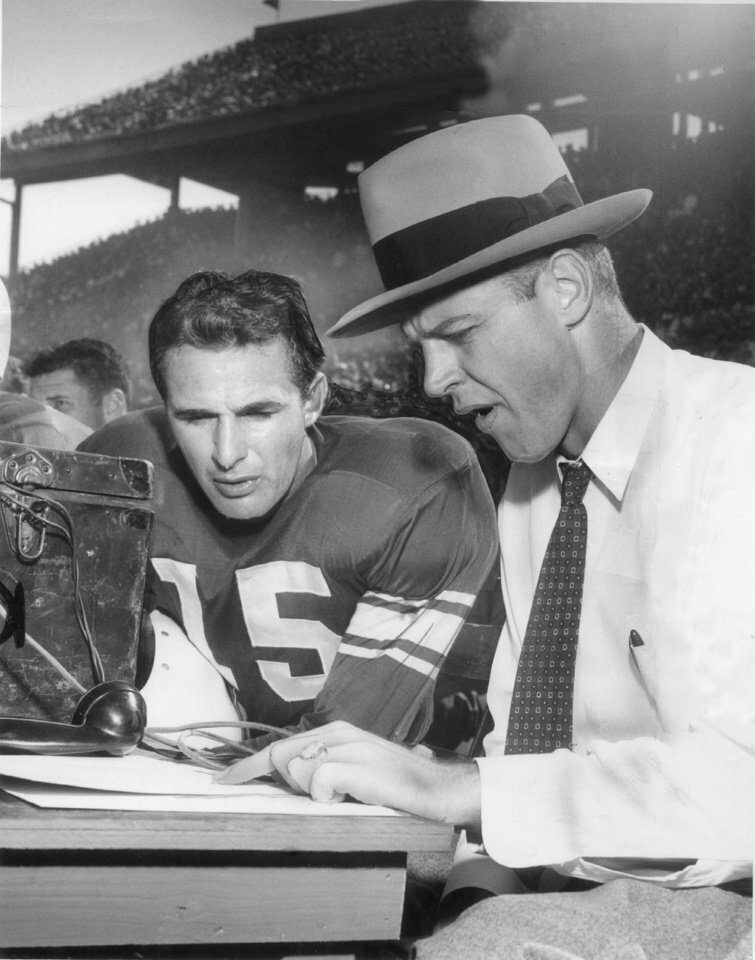 Bud Wilkinson may be the most underrated coach in college football history. The person who started the tradition of football at Oklahoma was Bud Wilkinson.  An intelligent man with a persuasive manner and a quiet resolve, Wilkinson preached the importance of being prepared.  “If you have the will to prepare, things will usually work out quite well.” said Wilkinson.  “The will to win will take care of itself.” Between 1953 and 1957, Wilkinson’s Oklahoma Sooners won 47 consecutive games, an NCAA record that still stands.  During the streak, OU averaged 34.5 points perfkei game while holding opponents to under six.  Wilkinson won 14 league and three national championships.  From 1947 to 1963, the Sooners won six of eight bowl games and compiled a winning percentage of .826. Records didn’t interest him.  Nor did polls.  Bud Wilkinson recruited the smartest players, then taught them readiness, discipline and character.  “Bud was real demanding when it came to knowing what to do, when to do it and how to do it,” said J.D. Roberts, an All-American guard for OU in 1953.  “An Oklahoma team under Wilkinson was never unprepared.” Ultra-organized, Wilkinson broke down drills almost to the minute, a rarity in his day.  He held his players to high standards for conditioning, academic achievement and personal appearance.  Wilkinson was an innovator.  He created the “no huddle” offense, known in the 1950s as the “”Go-Go.”  From 1948 to 1958, Oklahoma never lost more than one game in any season, going 107-8-2 for a winning percentage of .923. OU ran the Split-T offense, which Wilkinson learned while coaching under Dan Faurot with the Iowa Pre-Flight Seahawks naval team.  The first option offense in football, the Split-T incorporated a split back [flanker] and spread the offensive line out over twice as much ground as the conventional formations of the day.  The Sooners ran the Split-T to perfection.  It created gaps for the offense to exploit, and was a precursor of the wishbone, veer and spread offenses that later came into vogue in college football. “I’ve only known one genius in my lifetime,” said Eddie Crowder, an Oklahoma quarterback in the early 1950s who later coached at Colorado.  “His name was Bud Wilkinson.” Charles Burnham Wilkinson was born April 23, 1916, in Minneapolis.  He played for the 50th Street Tigers, a neighborhood youth team quarterbacked by future LPGA hall-of-famer Patty Berg.  His mother died when Bud was seven, and his father sent him to Shattuck Military Academy, alma mater of actor Marlon Brando.  Wilkinson played football, baseball, basketball, hockey and ran track at Shattuck.  He also participated in theatre.  After graduating in 1933, Wilkinson enrolled at the University of Minnesota to play for renowned coach Bernie Bierman. Wilkinson quarterbacked the Golden Gophers to three national titles.  In the summer of 1937, he led the College All-Stars to a victory over the defending world champion Green Bay Packers.  As a senior, Wilkinson won the Big Ten medal for athletics and academic performance before graduating with a degree in English.  He briefly worked for his father’s mortgage company before becoming an assistant coach at Syracuse and later, Minnesota.

In 1943, Wilkinson joined the U.S. Navy, where he worked as a hanger deck officer on an aircraft carrier and assisted Faurot with the Iowa Pre-Flight team.  When the war ended, Wilkinson joined new Oklahoma coach Jim Tatum in Norman.  When Tatum left for the University of Maryland the following year, the 31-year-old Wilkinson was named head football coach and athletic director of the Sooners. The cerebral Wilkinson won the first of 13 straight Big Six titles in his first season in Norman.  In 1948, OU began a string of 31 consecutive wins that ended with a loss to Kentucky in the 1950 Sugar Bowl.  After losing to Notre Dame and tying Pitt in 1953, the Sooners beat Texas to begin their celebrated 47-game win streak.  OU went undefeated in 1954, yet finished third in the polls.  The Sooners then won the next two national championships. Wilkinson invented the alumni newsletter.  He was the first football coach to host his own television show and partnered with Michigan State’s Duffy Daugherty to sponsor clinics for high school coaches.  From 1947 to 1958, Wilkinson’s teams did not lose a conference game, a streak which has never been seriously threatened.  His Sooners did not suffer a conference loss until 1959 against Nebraska, Wilkinson’s 79th league game. Following the 1963 season – his 17th at Oklahoma – Wilkinson retired from coaching at 47.  Under John F. Kennedy, he became the first director of the President’s Council on Physical Fitness.  Mr. Wilkinson ran for the U.S. Senate in 1964 and lost.  He then began a career as a network football analyst with ABC in 1965.  Teaming with Chris Schenkel and, later Keith Jackson, Wilkinson called three of the greatest games in college football history.  Each was dubbed the Game of the Century, and featured the two top-ranked teams in the nation.  In 1966, Notre Dame and Michigan State played to a 10-10 tie.  Three years later, Texas beat Arkansas in what was, at the time, the most-watched game in college football history.  In 1971, Wilkinson provided color analysis for the epic Nebraska – Oklahoma matchup. The greatest coach in Oklahoma history came back to football at 61.  In 1978, Wilkinson took the reins of the St. Louis [now Arizona] Cardinals.  After going 9-20, he was fired mid-way through his second season.  Wilkinson returned to broadcasting and later suffered a series of minor strokes.