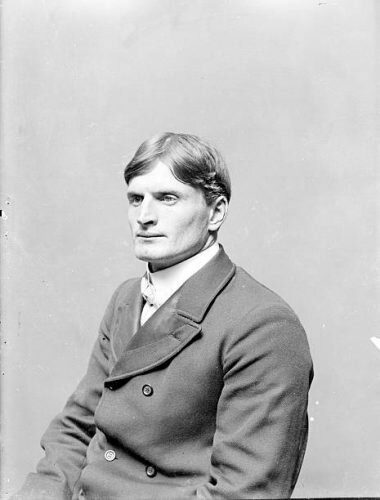 Rube Waddell struck out more batters in one season [1904] than any left-handed pitcher in American League history.  Well over a century later, his record still stands. Waddell was one of major league baseball’s first strikeout artists.  He led the AL in that category six straight seasons from 1902 to 1907.  Featuring an electric fastball, devastating curve and superb control, Waddell struck out 200 or more batters in four seasons, and whiffed over 300 in two others.  In 1903, Waddell struck out 302 batters – 115 more than the runner-up.  The following year, he fanned 349, to lead the league by 110.  No other pitcher would post back-to-back 300-strikeout seasons until Sandy Koufax in 1965-66. The colorful Waddell “had more stuff than any pitcher I ever saw,” said Connie Mack, who managed the Philadelphia Athletics a record 50 big league seasons, including six with Waddell.  “He had everything but a sense of responsibility.”  One of baseball’s first drawing cards and one of its first bona-fide celebrities, Waddell helped popularize the game at the turn of the 20th century. George Edward Waddell entered the world on a Friday the 13th and left it on April Fool’s Day.  In the 37 years in between, he was zany and unpredictable.  Called eccentric, nutsy or a screwball, Rube was a boy who never grew up.  Waddell battled alcoholism most of his adult life.  His drinking led to constant battles with managers and scrapes with teammates.  Waddell’s off-the-field antics were legendary.  He spent his entire first bonus check on a drinking binge, accidentally shot a friend through the hand, and once performed as an alligator wrestler. At 6’1” and 196 pounds, Waddell was a man-child.  A superb athlete, he is the first pitcher in major league history to record an immaculate inning by striking out the side on nine pitches.  He also played semi-pro football, once scoring five touchdowns in one game.  But Waddell was immature, and may have suffered from a developmental disability, ADD or autism.  Early in his career, he would leave mid-game to go fishing.  Waddell had a fascination with fire trucks and would run off the field to chase them during games.  He was easily distracted, and opposing fans would hold up puppies and shiny objects to put him in a trance on the mound. The Sporting News, then America’s foremost baseball publication, called Waddell “the sousepaw,” in reference to his drinking and left-handedness.  One offseason, he toured the nation in a melodrama called The Stain of Guilt.  While performing in Chicago, Waddell left the theatre and wandered into a circus, where he allegedly punched a lion.  Not amused, the animal bit Waddell on his pitching hand. “In my opinion,” said the great Walter Johnson, who won 417 major league games, including a record 110 by shutout, “and I suppose if there is any subject that I am qualified to discuss it is pitching, Rube Waddell had more sheer pitching ability than any man I ever saw.”

Waddell’s best season came in 1905, when the strapping southpaw went 27-10, posted a miniscule 1.48 ERA, and struck out 287.  He won the league’s pitching Triple Crown [wins, ERA, strikeouts], and recorded a stingy WHIP [walks plus hits per inning pitched] of 0.977.  The season did not end well for the A’s or their star pitcher, however.  Waddell missed the final month of the season and the World Series against the New York Giants.  Some speculate Rube injured his pitching shoulder in an early September scuffle with a teammate over a straw hat, while others contend gamblers had paid Waddell to sit out the Series, won by New York, four-games-to-one. The left-handed fireballer played for five teams in 13 big league seasons; nine in the AL, four in the NL.  He broke in with the Louisville Colonels in 1897, played with the Pittsburg Pirates and Chicago Orphans [later Cubs].  Waddell enjoyed his greatest success with  Mack’s Philadelphia Athletics.  After joining the A’s at the end of June 1902, he went 24-7 in the remaining three months of the season.  Waddell won 20 or more games four straight times and twice won 19.  He had three seasons with an ERA under 2.00, and posted a WHIP of under 1.10 six times. Despite his dominance on the mound, complaints from teammates forced Mack to sell Waddell to the St. Louis Browns for $ 5,000 following the 1907 season.  He went 33-29 in three years in St. Louis, was released in 1910, and never pitched another big league game.  Waddell died of tuberculosis four years later, at 37. The 349 strikeouts Rube Waddell recorded in 1904 stood as an American League record for seven decades, until Nolan Ryan surpassed it in 1974.  Mr. Waddell – who was born in Bradford, Pennsylvania, 146 years ago this week — was elected to the Baseball Hall of Fame in 1946, entering as a member of the Athletics.  More than a century after throwing his last big league pitch, the little-known Rube Waddell remains the A’s all-time career ERA leader [1.97].