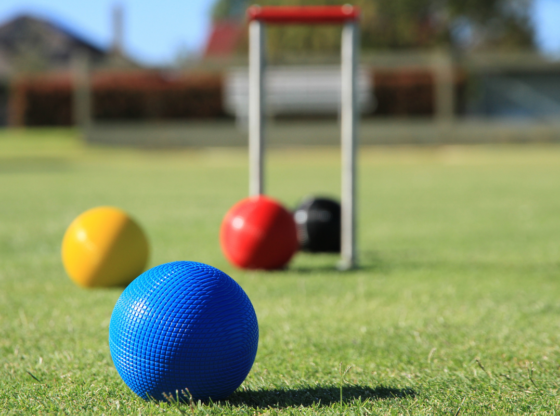 Croquet [crow-KAY] is a sport that involves knocking wooden balls with a mallet through hoops—called “wickets” in the United States—embedded in a grass playing court.  The origins of the sport are a wee bit cloudy.  Some believe it developed from the French “jeu de maille” [game of the mallet] in the 1400s.  After traveling to Ireland, the game arrived in England in the mid-19th century.  Isaac Spratt, a London toy dealer, set forth the first known official rules of croquet in 1859.  Nine years later, the first croquet all-comers’ match was held at Moreton-in-Marsh, Gloucestershire and, in the same year, the All-England Croquet Club was formed at Wimbledon.  Croquet took England by storm in the 1860s, becoming highly popular as a social pastime that could be played by both sexes.  It was enthusiastically promoted by the Earl of Essex and made its way to the U.S. a short time later.  The sport suffered a setback in America in the 1890s, when the Boston clergy spoke out against the drinking, gambling, and licentious behavior associated with it on the Common.  Croquet [British pronunciation puts the accent on the first syllable, American on the second] was an event at the 1900 Summer Olympics, where France sent the only team and won all the medals.  Roque, an American variation of croquet, was an event at the 1904 Games in St. Louis.  The game has not been an Olympic sport since.

There are many variations of croquet played today.  Two forms—association [or “Oxford”] croquet and golf croquet—are most often played internationally.  Golf croquet is easier to learn, faster to play and most popular in Egypt.  Other forms of the game include garden [widely played in the UK], American six-wicket, and ricochet, which is often used as a stepping stone to the association version of the game.  Croquet has a particularly strong following in the U.K, New Zealand, Australia, Egypt, U.S., and South Africa and is now played competitively in over 20 countries.  The Croquet Association governs the sport in England and Wales, overseeing about 170 clubs and sponsoring croquet’s four major tournaments:  the Open Championship, World Championship, Men’s Championship, and President’s Cup.  The All-England Lawn Tennis and Croquet Club, which hosts the Wimbledon tennis championships, retains an active croquet section and the sport is played by many clubs and universities throughout the UK.  The United States Croquet Association governs about 200 clubs across America.  Established in 1977, the USCA promotes the uniquely American variety of six-wicket croquet.

Croquet is played by clubs at colleges and universities throughout the world.  With over 2,000 student participants, Oxford University’s annual Cuppers tournament is the largest croquet event in the world.   St. John’s College and the U.S. Naval Academy engage in a yearly match in Annapolis, a tradition that attracts thousands of spectators each April.

In competitive croquet, a handicap system [bisques] provides less experienced players a chance of winning against more formidable opponents.  Players of all ages and both sexes compete on level terms.  Wickets are made of iron or precision steel, while balls weigh one pound apiece and have only one-eighth of an inch of clearance through the uprights.  Mallets are made of fine wood and the playing surface is comprised of manicured grass.

Nine-wicket croquet—commonly known as “backyard croquet”–is the traditional sport that Americans have enjoyed for over 150 years.  Although the official court size is 100 feet long by 50 feet wide, playing areas may be adjusted to fit the available space.  In backyard croquet, nine wickets with two stakes are arranged in a double diamond pattern.  Games often involve two teams comprised of two players per side, with four balls being used.  One side uses blue and black balls, while the other plays balls that are red and yellow.  Only the striking [end] face of the mallet may be used to strike a ball, unless players have agreed in advance to use the side of the mallet.  The object is to advance the ball through the course, scoring points for each wicket and stake in the correct order and direction.  The winner is the first side to score 14 wicket points and two stake points for each of its balls.  Players take turns, and only one plays at a time.  At the beginning of a turn the player [called the striker] has one shot.  After that shot the turn ends, unless a bonus shot is earned by scoring a wicket or stake, or by hitting another ball.  The turn ends when the striker has no more bonus shots to play or has finished the course by scoring the finishing stake.

Robert Fulford is the greatest croquet player ever to swing a mallet.  Born 50 miles north of London in Colchester—former home of the “Iron Lady,” Margaret Thatcher—in 1969, he started to play the game at 15.  After graduating from the University of Durham in northeast England, “Fluffy” went to work as a CPA for a stone merchant in Essex.  Fulford has dominated croquet since the early 1990s, winning 25 major championships between 1990 and 2015.  A five-time World Champion, he has won the President’s Cup and Open Championship–11 times each.  Fluffy has claimed the Men’s Championship four times and has appeared in the finals of 38 major championships, winning 25 while finishing runner-up 13 times.  Fulford features a wide range of shots.  His tactic of peeling [sending] an opponent’s ball through Hoop One makes a triple peel as hard as possible for the opponent, and he uses the increasingly-popular sextuple peel [send the ball through its last six hoops in a single turn] more than any player in the game.  Fulford uses an “Irish grip” [where the knuckles of both hands point back with both thumbs pointing down], and employs a wristy technique in a sport that generally admonishes wrist movement.  “The wrist muscles should never be used to push or accelerate the mallet forward,” says famed Australian coach John Riches.  Strong wrists make the Irish grip work for Fulford, who took three of four major championships in 1998 and 2006 and has been the top-ranked player in the world a record 3,526 days.  Mr. Fulford , who once won a lawnmower after winning a croquet tournament, earns about £ 8,000 [nearly $ 10,000] per year playing the sport he loves.