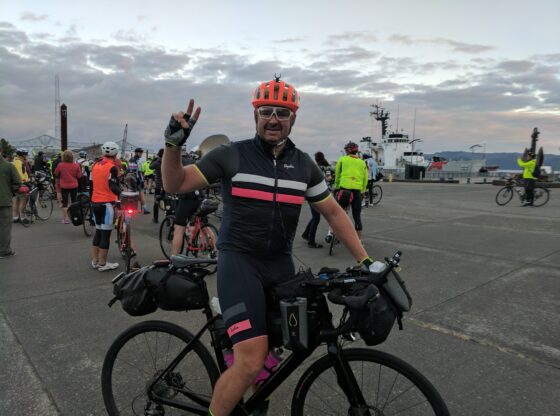 God helps those that help themselves.

The Trans Am Bike Race [TABR] is an annual, self-supported, ultra-distance cycling race across the United States.  Starting from the Pacific coast in Astoria, Oregon, and finishing on the Atlantic coast in Yorktown, Virginia, the route is over 4,200 miles long.  The course uses the TransAmerica Bicycle Trail that was developed by the Adventure Cycling Association for the Bikecentennial event in 1976.  Passing through ten states, 22 national forests, two national parks, and 112 counties, the course goes through small towns across America.  Covering the rugged mountain passes of the Rockies, wind-swept plains of Kansas, and never-ending hills of eastern Virginia, the TABR is an event like no other.  Racing only for pride, there is no prize money, medals or trophies for the top finishers.

Founded in 1973, the Adventure Cycling Association is a non-profit organization whose mission it “to inspire and empower people to travel by bicycle.”  With over 50,000 members, the ACA is the largest non-profit membership bicycling organization in North America.  Bikecentennial ’76 was an event consisting of tours on the TransAmerica Bicycle Trail in in the summer of 1976 to commemorate the 200-year anniversary of the signing of the Declaration of Independence.  More than 4,100 cyclists took part in Bikecentennial.  The route was chosen for bicycle-friendly road surfaces, minimal traffic, varied terrain, interesting landmarks, and access to campgrounds and grocery stores.

First held in 2014, the Trans Am is not a stage race, which consists of a series of individual races ridden consecutively, much like the Tour De France [Daily Dose, 7/21/16].  Rather, it is run continuously, making it a long individual time trial.  The clock never stops from the moment the riders leave the start to the moment they reach the finish.  Riders must strategically choose how much time to devote to riding, resting and refueling each day.  Called “bikepacking,” TABR riders must be fully self-supported, requiring them to complete the course under their own power, with no drafting and no support cars or outside assistance allowed.  The Trans Am is quite different than the Race Across America, in which each rider has a large support crew with multiple vehicles for assistance.  All food, accommodations, and repairs must be commercially available to all challengers and not pre-arranged: no private supply and no private lodging is permitted.  There are no checkpoints or designated rest periods on the course, nor is there a finish time cut-off for the race.  Rider’s positions are monitored by GPS satellite-based tracker services mounted on their bikes that upload their positions to a website for all riders and followers to view.  Many competitors also update their progress using social media.  Any type of bicycle is allowed, including recumbent bikes.

The first 325 miles of the TABR course are the easiest, and gets progressively harder and more remote as it passes Idaho into Montana.  Wyoming and Kansas are windy, and there are several hundred-mile-or more stretches of the route where water is unavailable.  The 1,150 miles of the Rockies involves 52,000 feet of climbing, while the last 1,150 miles of the course—including Kansas, Kentucky, and Virginia—is 67,000 vertical feet.

The founder and organizer of the Trans Am is Nathan Jones, who owns and operates a bike shop in Portland.  Jones participated in the inaugural event in 2014, finishing 13th.  In 2010 and 2011, he rode in the Tour Divide, a 2,745-mile-long mountain bike race that runs the length of the Rocky Mountains, from Canada to the Mexico border.  Like the Tour Divide event, TABR has rules.  Rule Number One is “No complaining about the rules.”

In 2014, 45 riders started the race, won by Mike Hall of Great Britain in 17 days, 16 hours, which is still the course record.  Twenty-five cyclists finished the inaugural contest.  The following year saw 41 competitors start, while 24 finished the event, won by Australia’s Jesse Carlsson in 18 days, 23 hours.  In 2016, two routes were open for the Trans Am: eastbound, from Oregon to Virginia; or westbound, from Virginia to Oregon.  Riders competed on both courses, with the eastbound winner finishing more than eight days sooner than the first westbound finisher.  Additionally, a “pairs” category was added for the 2016 race.

The Newton Bike Shop in Newton, Kansas, is situated just past the halfway point of the course.  The good folks at Newton—whose town motto is “Life As It Should Be”—offer services at any time of the day or night to all TABR participants, including beds, showers, laundry, kitchen and bike repair services.  In 2015, a wall-mounted web cam live-streamed interviews with each participant who stopped at Newton’s.

Lael Wilcox left Oregon the morning of June 4, 2016, with her sights set on becoming the first American—and first female—to win the Trans Am.  Powered by cheap pizza, chocolate milk, and granola bars, she averaged 235 miles a day and five hours of sleep each night, usually in a sleeping bag along the side of the road.  Steffen Streich, a veteran cyclist from Greece, led all competitors throughout the race before making a fatal mistake in Virginia.  Exhausted, he stopped for a quick nap by the side of the road.  When he awoke, it was the middle of the night and, disoriented, he rode off in the wrong direction.  Ten miles later, he saw the light of another bike ahead.  It was Wilcox, the woman he had hoped he wouldn’t encounter until the race was over.  Realizing his error, Streich turned around, and the two rode together until Streich offered a truce.  “We’ve been racing hard for two weeks,” pleaded Streich.  “Let’s ride to the finish together.”  Wilcox, who had scaled back sleep and was nearing exhaustion, replied, “No way, this is the best part.  It’s a race and I want to race to the finish.”  She sped off and beat the Grecian by two hours.  Wilcox rode the final 400 miles of the race in about 33 hours, finishing in 18 days, 0 hours, ten minutes, to smash the women’s record by nearly three days.  Upon arriving in Yorktown the morning of June 22, Lael Wilcox fulfilled her goal of winning the Trans Am while becoming the first American and first woman champion.

For more on the Trans Am Bike Race, watch Inspired to Ride, a feature-length documentary available on Netflix about the 2014 event.  The 2017 TABR is scheduled to begin June 3, 2017 at 6:00 am PDT.