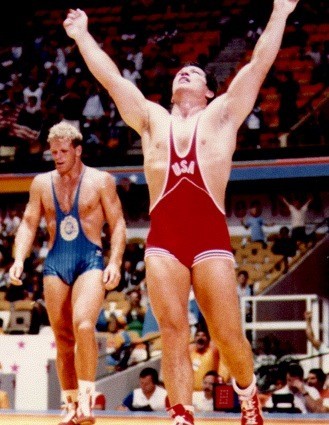 In 1982, Jeffery Carl Blatnick was diagnosed with Hodgkin’s lymphoma.  They removed his spleen and his appendix, and he underwent radiation therapy.  Two years later, he became the first American ever to win a gold medal in Greco-Roman wrestling.

Born in Schenectady, New York—hometown of Blood, Sweat and Tears’ guitarist Steve Katz and located about 160 miles north of Manhattan—on this date in 1957, Blatnick attended Niskayuna High School in suburban Albany.  In 1972, Niskayuna wrestling coach Joe Bena found himself without a grappler that weighed over 200 pounds. “I went into the halls looking for a big kid and found Blatnick,” said Bena.  Blatnick, who was a freshman, preferred basketball, and said he did not want to wrestle.  Three years later, he was New York state champion.  After graduating from Niskayuna, Blatnick attended Springfield College in Springfield, Massachusetts, where, in 1891, a graduate student by the name of James Naismith invented the game of basketball.  After losing his brother in a motorcycle accident during his sophomore year, Blatnick channeled his grief into wrestling, advancing to the NCAA Division II finals before losing to Dave Klem of Eastern Illinois.  It would be his last tournament loss, as he returned to win heavyweight titles in 1978 and 1979.  Blatnick graduated from Springfield in 1979 as a three-time All-American and time NCAA champion.

After college, Blatnick continued to wrestle, switching from freestyle to Greco-Roman, which allows no holds below the hips.  He took second place in the 1980 World Cup and qualified for the U.S. Olympic Team but did not get a chance to compete in the 1980 Summer Games in Moscow due to the U.S. boycott.  Two years later, he was diagnosed with cancer of the lymph nodes and underwent treatment.  Following therapy, Mr. Blatnick’s cancer went into remission and he returned to wrestling, earning a spot as a super-heavyweight on the 1984 Olympic Team.  Competing at 248 pounds, Blatnick emerged from the two-match Eliminatory Round with the most Classification Points, earning him a trip to the finals to face Sweden’s Tomas Johansson at the Anaheim Convention Center.  Despite giving away 30 pounds, Blatnick outpointed the Swede, 2-0, to win the gold medal.  After the gun went off to end the match, Blatnick fell to his knees and cried.  Olympic teammate Steve Fraser had also captured gold earlier that week, making he and Blatnick the first Americans to win Olympic titles in Greco-Roman wrestling.  Fraser described Blatnick as, “tough, ornery and feisty,” adding that he reached the top of the sport on, “sheer will.”  Dan Chandler, another Olympic teammate, said Blatnick was, “not an extremely gifted athlete, but he had the ability to keep a match close and get his opponent tired, then eat them up at the end of the match.”  Inspired by his courage, the American Olympic team voted to have Blatnick carry the flag during the Closing Ceremony at the Los Angeles Coliseum.

Jeff Blatnick’s cancer returned in 1985.  After undergoing chemotherapy, he retired from competition in 1988.  He was hired by UFC as a broadcaster and became intrigued by the sport.  In 1994, he became UFC Commissioner, where he was not afraid to use the allure of his gold medal to gain access to politicians who otherwise would not meet with a UFC representative.  Blatnick was instrumental in changing the perception of the sport from no holds barred cage fighting to mixed martial arts, insisting on a name change to MMA.  He created a manual of policies, procedures, codes of conduct and rules, traveling around the country educating regulators and changing the image from seedy spectacle to a legitimate sporting contest.   Humble, low key and down to earth, Blatnick first convinced the state of California to sign off on a set of codified rules that governed MMA.  Others soon followed.  Blatnick continued his involvement in wrestling, serving as USA Wrestling’s state director for New York and doing broadcast work for NBC and ESPN.  Around 2005, he asked Bob McGuire, Athletic Director at Burnt Hills-Ballston Lake High School in upstate New York, if he could serve as a volunteer wrestling coach.  “What do you say when you hear that from an Olympic champion,” recalled McGuire, “you open the door and say ‘come on in.”

On October 24, 2012, Mr. Blatnick died following complications from heart surgery.  He was 55 years old and is survived by his wife and children.  The three-time national Greco-Roman wrestling champion was inducted into the International Wrestling Hall of Fame in 1999 and the MMA Hall of Fame in July 2015.

“There’s two kinds of pain in sports: the pain of discipline and the pain of regret.”- Jeff Blatnick