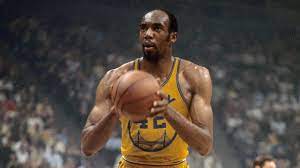 Born in Akron, Ohio—home of LeBron James [Daily Dose, December 30]—on this date in 1941, he was one of Andrew and Leala’s two sons.  Andrew Thurmond pounded rubber at the Firestone tire factory while his wife co-owned a beauty salon.  Nate attended Akron Central High School, were he teamed with future Naismith Basketball Hall of Fame guard Gus Johnson.  The dynamic duo were eliminated in the Ohio state high school tournament by Middletown–“The Basketball Capital of Ohio”–who were led by Jerry Lucas.  The Middies went on to win the state title that year and Lucas—who was one of the greatest players in the history of U.S. high school basketball–went 76-1 in three year varsity seasons at Middletown.  It would not be the last time that Thurmond would be overshadowed during his career.

While Lucas chose to play collegiately at Ohio State, Thurmond eschewed the large campus in Columbus for the friendly confines of Bowling Green State University.  Influenced by Joe Siegferth, his high school coach and a BGSU alum, Thurmond set off for the 135-mile journey to Bowling Green in the autumn of 1959.  In three varsity seasons with the Falcons, the 6’11”, 225-pound bruiser averaged 17 points and 17 rebounds per game.  Thurmond became a consensus All-American in his senior season of 1962-63.  While eating lunch in the school cafeteria in April 1963, Thurmond learned from a fellow student that he had been selected with the third overall pick of the NBA Draft.  Thurmond had never been to California and his only image of San Francisco was from what he had gleaned from Rice-A-Roni ads on television.  While unpacking in his hotel room hours after arriving in the Golden State, Thurmond was greeted by an earthquake.

Prior to the 1962 season, the Philadelphia Warriors moved west to San Francisco.   In those days, the NBA was ruled by big men.  More specifically, by San Francisco’s Wilt Chamberlain and Bill Russell of the Boston Celtics, two of the most dominant centers ever to play the game.  Chamberlain [Daily Dose, March 2] had been league MVP in 1960 and was the greatest offensive force the NBA had ever seen, scoring 100 points in a single game in 1962 and averaging 50 points a game that season.  Thurmond, who normally played center, was moved to forward opposite Chamberlain and made enough of an impact to be named to the 1964 All-Rookie Team.  Midway through the following season, Chamberlain was traded to the Philadelphia 76ers and Thurmond became an All-Star center.  After Rick Barry [Daily Dose, February 9] arrived in 1965-66, the Warriors advanced to the 1967 NBA Finals against Chamberlain and the Sixers.  Thurmond and “The Dipper” went head to head, each grabbing over 20 rebounds in every game, which Philadelphia won, four games to two.  Thurmond averaged over 21 points and 22 rebounds per game in 1966-67—season averages exceeded only by Russell and Chamberlain in NBA history—and “Nate the Great” finished runner-up to Chamberlain in that year’s MVP voting.  Looking for a change, the Warriors traded Thurmond to the Chicago Bulls for Clifford Ray prior to the 1974-75.  His debut was auspicious, as on Opening Night he scored 22 points, grabbed 14 rebounds, handed out 13 assists and blocked 12 shots for the first quintuple-double in NBA history, a feat that has since been accomplished only three times.  Thurmond was unable to sustain the momentum and was traded to Cleveland 13 games into the following season, where the 35-year-old center helped the Cavaliers to the NBA playoffs for the first time in franchise history.  Cleveland made quite a run, beating Washington in the “Miracle of Richfield”, before losing to Boston in the 1976 Eastern Conference Finals.  Mr. Thurmond retired following the 1976 season.

Nate Thurmond is the only player not named Russell or Chamberlain to grab 40 rebounds in a single NBA game.  His rugged, in-your-face style of play was underappreciated.  In the era of the “supercenter,” his greatness was often overlooked by fans and media.  “I’m just not a tricky basketball player.  Being flashy takes unnecessary effort.”  Thurmond played better offense than Russell and better defense than Wilt.  Opponents held him in the same regard as Russell, who is widely considered the best defensive post player in history.  “He plays me better than anybody ever has,” said Kareem Abdul-Jabbar,” when I score on Nate, I know I’ve done something.”  Mr. Thurmond could do it all; pass, rebound, score and block shots.  In February 1964, he hauled in 18 rebounds in a quarter, an NBA record that still stands.  Nate the Great had a consistent all-around game.  In 14 NBA seasons, he collected 14,464 rebounds and 14,437 points.  Of the top 20 single best rebounding seasons in NBA history, 19 belong to Russell and Chamberlain.  The other belongs to Nathaniel Thurmond.  The Warriors and Cavaliers have both retired Mr. Thurmond’s number 42 jersey.  In 1996, he was named one of the 50 Greatest Players in NBA history and in 1985 was inducted into the Naismith Basketball Hall of Fame.