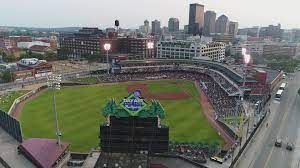 The Dayton Dragons have sold out every one of their home games during their 20-year existence — the longest streak in U.S. professional sports history.

The Dragons are a Class A Midwest League affiliate of the Cincinnati Reds.  They came to Dayton in 2000 and have led all Single A baseball in total season attendance in each of their 20 seasons in southwestern Ohio.  On July 9, 2011, the Dragons sold out their 815th consecutive game, surpassing the record set by the Portland Trail Blazers from 1977 to 1995.  It established the longest streak in U.S. professional sports.  Through the end of the 2019 season, the streak is still going strong at 1,386.

Only seven minor league franchises in America draw more fans than the Dayton Dragons, and all are Triple-A teams.  In fact, the Dragons are the only non-AAA club in the top ten.  Voted in 2007 by Sports Illustrated as one of the top ten hottest tickets to get in all of professional sports, the Dragons drew 550,725 fans in 2018, averaging 7,868 patrons over 70 home dates.

For more than a decade, the Dayton Dragons have boasted the highest total attendance among all 130 teams below the Triple A level.

According to a 2016 ranking by Forbes conducted, the Dragons are worth $45 million, making them the third-most valuable franchise in minor league baseball [MiLB], an impressive feat for a Single-A team.  In 2013, Forbes valued the Dragons at $31 million, placing them sixth on the list.  The following year, Mandalay Baseball Properties, a partnership between Mandalay Entertainment and private equity fund Seaport Capital, sold the club to Palisades Arcadia Baseball for $40 million.  It was the richest transaction in minor league history.

The Dragons came to Dayton two decades ago from Rockford, Illinois.  The home of 2016 Rock and Roll Hall of Fame inductee Cheap Trick, Rockford is the third-largest city in Illinois.  The franchise debuted in 1988 as the Rockford Expos, an affiliate of the big league club in Montreal.  After brief affiliations with the Royals and Cubs, the organization has been aligned with the Reds since 1999.  The following year, the franchise moved to Ohio’s fourth-largest metro area and established itself as the top organization in minor league baseball.

The Dragons play home games at Fifth Third Field, an 8,200-seat ballpark that opened upon the team’s arrival in 2000.  Built on the site of a former Delco Electronics plant, the ballpark compares favorably to a Triple-A venue.  Featuring 1,400 club seats, 29 suites and three party decks, Fifth Third Field is the class of
Class A.  Reds Hall of Famer Johnny Bench caught the ceremonial first pitch at the stadium’s opening in April 2000.  Since then, Fifth Third Field has hosted two Midwest League All-Star Games and three Atlantic 10 Conference Baseball Tournaments.

The Dragons outdraw 23 of the 30 teams in Triple-A.  In 2018, the franchise attracted nearly twice as many fans as the Winston-Salem Dash, the second-biggest draw in Class A baseball.

What makes a Class A team 50 miles north of Cincinnati the greatest draw in pro sports history?  According to Vice President, Eric Deutsch, who has been with the Dragons since its inception, a variety of factors have contributed to the team’s success.  The club focuses on community building.  The Dragons MVP Program empowers teachers in the greater Dayton area to motivate and reward students for success in the classroom with free tickets for them and their families.  The Community All-Stars Program honors individuals – first responders, volunteers, or good Samaritans — who helped improve the quality of life in the Gem City.  And the Dragons honor military veterans and their families with several events throughout the season.

With a median household income $7,500 below the national average, Dayton recognizes the need to provide an affordable ballpark experience for its fans.  Box seats along the infield foul lines sell for under $10, while families can spread out a blanket and enjoy inexpensive lawn seating near the both outfield corners.

The Dragons certainly don’t have the pedigree of the New York Yankees.  With 27 World Series titles, the Bronx Bombers are the most decorated franchise in MLB history.  Conversely, the Dragons have only one Midwest League title, in 2011.  In 20 seasons in Dayton, the team has amassed an overall record of 1,240-1,401 [.470].  Yet that does not deter from fans pouring through the turnstiles in Dayton.  With an emphasis on unparalleled customer service along with good food, ample parking, easy access in and out of the ballpark, and a fun-filled night of baseball, the Dragons are a model organization that knows what matters most.

MiLB is one of the most budget-friendly options in sports.  Unlike a Rolling Stones concert, where patrons pay upwards of $300 each to see a geriatric rock and roll band decades past its prime, minor league baseball showcases the stars of tomorrow in a family-friendly atmosphere for a fraction of the cost.

Since 2000, minor league clubs have opened over 60 new ballparks.  Nashville and Biloxi moved into new stadiums in 2015.  Nashville saw home attendance surge 75 percent the following year, while Biloxi’s rose 73 percent.  While Fifth Third Field is a beautiful and continually updated ballpark, it is two decades old, forcing Dayton to offer more than a sparkling building.  The Dragons’ business model revolves around affordable entertainment as the key to great attendance and subsequent profits.  Last season, the average cost for a family of four attending a minor league game was less than $70, roughly the tab of a night at the movies.  Meanwhile, the average price of taking in a major league game is twice that, even when sitting in the cheap seats.  Last season, Dayton earned an estimated $6.7 million in pretax profits; tops in the minor leagues.

Through the 2018 season, 97 Dragons players have gone on to play in the big leagues since the team’s move to Dayton.  Two-time All-Star and Reds Hall of Famer Adam Dunn spent the 2000 season in Dayton.  Joey Votto, 2010 NL MVP and career leader in OBP among active major leaguers, was the Dragons first baseman from 2003-04.  Current Yankee shortstop Didi Gregorious honed his skills at Fifth Third Field, as did 2014 NL strikeout leader Johnny Cueto, three-time All-Star Jay Bruce, and 2017 NLCS MVP Justin Turner.

The Dayton Dragons are one of MiLB’s marquee franchises.  In 2012, they earned the President’s Trophy as top organization in all of minor league baseball.  That same year, the Dragons became the first minor league team ever nominated for Street & Smith’s Professional Sports Team of the Year award, an honor that went to the Stanley Cup champion Boston Bruins.  Brandy Guinaugh was named Woman Executive of the Year for all of minor league baseball in 2016.  Two years later, Dragons president and general manager, Robert Murphy, was selected as Minor League Baseball Executive of the Year.