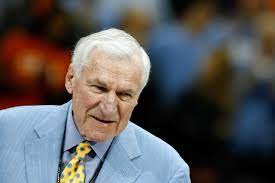 Dean Smith is one of the winningest coaches in college basketball history.

The only son of strict Baptist schoolteachers, Dean Edwards Smith was born February 28, 1931, in Emporia, Kansas.  His father, Alfred Smith, coached the Emporia High Spartans to the 1934 state basketball championship with the help of the first black player in the history of the Kansas high school tournament.  Smith was a standout athlete at Topeka High School, where he quarterbacked the football team, played catcher in baseball and was an all-state point guard in basketball.

After graduation, he attended the University of Kansas on an academic scholarship, majoring in mathematics and PE.  Smith played varsity baseball, freshman football, and was a reserve guard on the Jayhawks basketball team, playing for the legendary Forrest “Phog” Allen, who had been taught the game by James Naismith, the inventor of basketball.

He helped KU to a national championship in 1952 and the NCAA title game in 1953, where the Jayhawks lost to Indiana.  Following graduation in 1953, Smith served as an assistant coach at Kansas for one season before serving in the Air Force in Germany.  He returned to the U.S. and coached the golf and baseball teams at the Air Force Academy.  In 1958, he was asked by University of North Carolina coach Frank McGuire to join his staff.  Three years later, a point-shaving scandal—combined with major NCAA violations—led to McGuire’s dismissal.  He was replaced by 30-year-old Dean Smith.

In the wake of the scandal, UNC Chancellor William Aycock told Smith that wins and losses did not matter as much as running a clean program and representing the university well.  In his first season, the Tar Heels went 8-9.  It would be the only losing season in Dean Smith’s 36 years as a head coach.

After being hanged in effigy on the university campus following a loss to Wake Forest in 1965, Smith led the Tar Heels to the ACC title in 1966-67, the first of 17 regular season conference crowns he would earn during his tenure.  UNC appeared in three straight Final Fours from 1967 to 1969 and won the NIT championship in 1971.

Following six more ACC championships, Smith led the Heels to a second NCAA title in 1993, where UNC beat Michigan’s “Fab Five” [Daily Dose, 3/9/16] in the title game, 77-71.  Following his eleventh Final Four appearance in 1997, the 66-year old Smith retired from coaching, saying he, “felt he could no longer give his team the same enthusiasm he had throughout his career.”

He was one of the first white coaches in the South to recruit African-American players and made Charlie Scott the first black scholarship athlete at UNC.  Smith introduced the foul line huddle, in which one player would relay the coach’s instructions to teammates and was the first coach to start an all-senior lineup in the final home game of the season, another common practice in today’s game.

Carolina players were the first to acknowledge a pass from a teammate after scoring a basket and introduced the fist signal to indicate they were tired and needed a substitute.  Smith’s time-melting four corners offense—a stall tactic used to protect a lead—led to the creation of the shot clock.  Smith was intensely loyal and beloved by his players.  More than 95 percent of his letterman graduated from one of the nation’s premiere public universities.

At the time of his retirement in 1997, Dean Smith was the winningest coach in Division I college basketball history.  He led UNC to 11 Final Fours and two national championships.  In 27 NCAA tournament appearances, Carolina went 65-27.  Mr. Smith coached 30 All-Americans, 21 first-round NBA draft picks and five future NBA coaches.  In college basketball, winning 20 games in a season is considered the hallmark of success.  Dean Smith’s teams won at least 20 games in every season but his first and won 30 or more games three times.  Smith led North Carolina to 17 ACC regular season titles and won the conference tournament 13 times.

John Wooden said, “Dean is the best teacher of basketball that I have observed,” while Michael Jordan called him a “father figure to a lot of players and a lot of people.”  Mr. Smith is one of three coaches to have won an NIT, NCAA and Olympic tournament title, having guided Team USA to the gold medal in the 1976 Montreal Games.   In 36 seasons, he compiled a record of 879-254 [.776], was an eight-time ACC Coach of the Year and four-time national coach of the year.

He led 22 different Tar Heel teams to top ten finishes.  In 1986, UNC named their new basketball home the Dean E. Smith Center and Coach Smith was named 1997 Sportsman of the Year by Sports Illustrated.  Smith was awarded the Presidential Medal of Freedom in 2013 and is a member of the Naismith, college basketball, Kansas and North Carolina halls of fame.  Dean Smith died on February 7, 2015, at 83.  He willed $ 200 to every letter winner that ever played for him at North Carolina which included a letter with the message to “enjoy a dinner out compliments of Coach Dean Smith.”

“There is a point in every contest when sitting on the sidelines is not an option.”
– Dean Smith