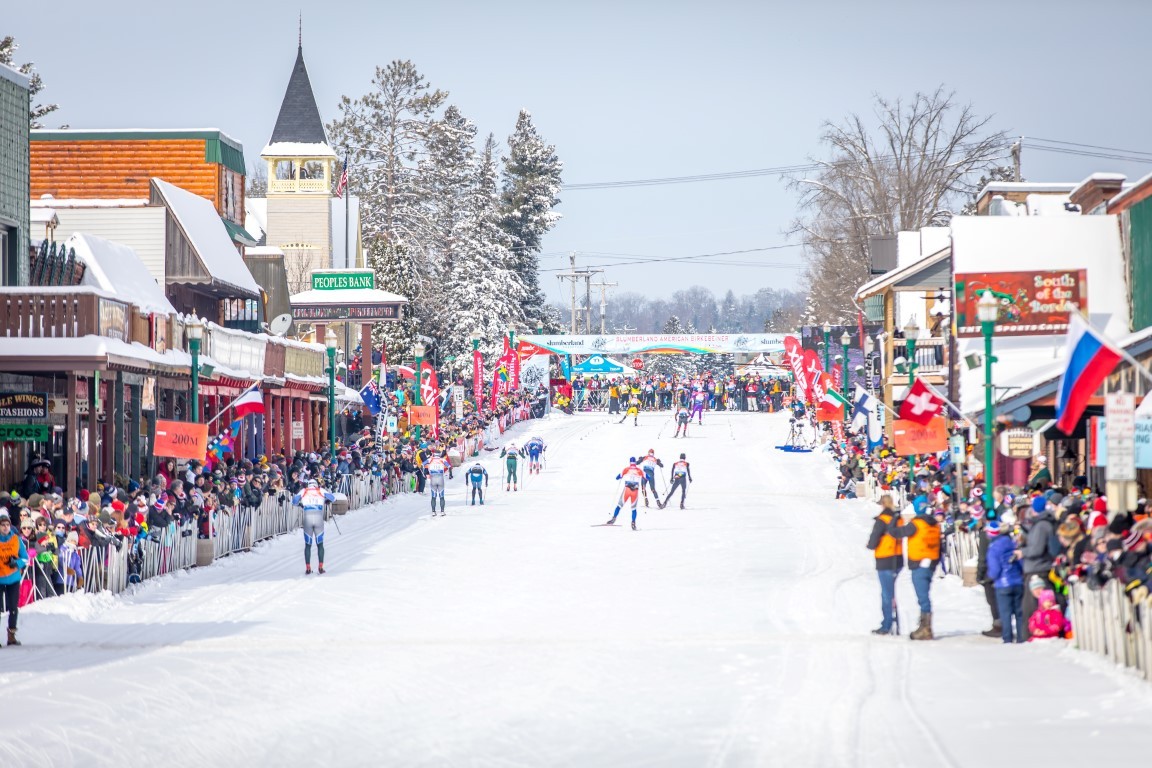 The American Birkebeiner is the largest cross country ski race in North America.

It all began in 1973, when 35 determined skiers gathered on the starting line in a small town in northwestern Wisconsin.  Little did they know, they were about to change everything.

Founded by Tony Wise, owner of the Telemark Ski Area in Cable, Wisconsin, the race is patterned after the Birkebeinerrennet, which commemorates a 13th century historical event.  In 1206, two warrior soldiers skied infant Prince Haakon to safety during the Norwegian civil war.  The prince subsequently became king of Norway, and the Birkebeiner soldiers became a Norwegian symbol of courage, perseverance and character in the face of adversity.  In honor of the Prince’s rescue, the Birkebeinerrennet ski marathon has been held in Norway since 1932.

Drawing on his Norwegian heritage, Wise named his event the American Birkebeiner – better known as the Birkie.  Today, skiers from all over the world come to America to ski the Birkie.  Ten nations have been represented in the winner’s circle, including Sweden’s Eric Ersson, who won the inaugural Birkie in 1973. Held each February, this year’s race included Caitlin Gregg, a member of the 2010 U.S. Olympic cross country ski team.

Part of the Worldloppet, a federation of 20 of the most prestigious ski marathons in the world, the Berkie includes both elite and recreational skiers.  The event involves two concurrent competitions held over slightly different distances.  Skate style [freestyle] skiers travel 50K [about 31 miles], while classic racers cover 55K [just over 34 miles].  The Birkie includes 10,000 skiers, 2,500 volunteers, and 30,000 spectators.  In 2016, Birkie visitors booked 4,100 room nights and brought $ 20 million to the local economy.

The Birkie uses a seeded system for starting the race.  Participants are seeded into starting waves based on their race history.  The first wave is the Spirit of 35, which goes off at 8:15 AM.  Celebrating the spirit of the 35 intrepid skiers who finished the first Birkie in 1973, it is comprised of a small group of skiers with the most Berkie experience.  The current group of Spirit skiers includes Ernie St. Germaine, a former employee of Tony Wise’s Telemark resort who has completed all 44 Birkies.

The women Elite Skaters go off at 8:30, followed five minutes later by the men and women racing in the Elite Classic.  Alternating Skate and Classic waves then depart every five minutes until the final wave leaves at 10 AM.  Rookies must ski in the final wave, while Waves 1, 2 and 3 are open only to Birkie veterans.

The mission of the American Birkebeiner Foundation, the organization that hosts the Birkie and its ancillary events, includes supporting healthy and active lifestyles among people of all ages and abilities.  Each year the Birkie provides nearly 200 skiers over the age of 70 with a special bib and their own wave – Wave 70.

The race is contested on the Birkie Trail, a 20-foot wide path that meanders through the beautiful north woods of Wisconsin.  The Birkie starts in Cable – three hours northeast of Minneapolis —  and ends on Main Street in downtown Hayward.  The hilly course is considered one of the most difficult in the world and includes an elevation gain of 1,380 feet.  Skiers must climb the Powerline Hills, traverse several flat sections, and take on Firetower Hill, the high point of the course at 1,730 feet.

Racers must descend Sledder Hill, a tricky downhill near a snowmobile trail.  County Road OO – Double Oh – marks the unofficial halfway point of the race.  After navigating a series of bends, skiers reach the top of El Moco, where they can see Hayward’s water tower – a most welcome site.  Marathoners must then cross the frozen Lake Hayward – windswept and unprotected – before arriving on Main Street.

First-time Birkie finishers receive a commemorative medal.  Skiers finishing subsequent Birkies receive a pin recognizing the number of races completed.  Awards are presented to wave winners and age-class winners.  The Tony Wise Award – a $2,500 cash prize – is given to the top American male and female finishers in the Skate Race.

Athletes completing their tenth race earn a commemorative plaque, while those finishing their 20th event become Birchleggers.  Birchlegger is the English translation for Birkebeinerne, the Norwegian name of the birch-barked leggings worn by the warriors who saved Prince Haakon.

While the marquee events of the American Birkebeiner  – the Skate and Classic races — are held on Saturday, race week features several other activities.  Thursday includes the Junior Birkie, a host of shorter ski races for children 16 and under.  Thursday events also include an adaptive competition, and Barkie Berkie races for skiers and their dogs.  The 29K Kortelopet races – Skate and Classic – are held Friday, as is the Prince Haakon, a 15K competition that starts at Mosquito Brook Road and ends in downtown Hayward.

The Birkie Trail plays host to a variety of other competitions throughout the year.  January brings the Birkie Tour, cross country ski races of 16, 27 or 47 kilometers.  The Fat Tire Birkie is the premier snow bike event in North America.  Held each March, riders test their skill and endurance in either the 47K Big Fat race or 21K Chico event.  The Birkie Trial Run Festival takes place the last weekend in September.  Eight running events are held, ranging from a 5K to the 100K ultramarathon.

The 44th American Birkebeiner Skate race was won by Anders Gloersen of Norway, in 2:02.29.  In the Classic competition, Benjamin Saxton edged Cole Morgan by less than two seconds to claim the $ 1,000 first-place prize.  In 2017, the official winner of both the Skate and Classic races was Mother Nature, as the event was canceled due to lack of snow.  It was the second time in Birkie history that unseasonably warm weather canceled the most important cross country ski race in North America.