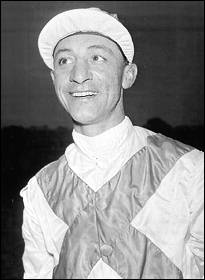 George Edward Arcaro is the greatest jockey in the history of American thoroughbred horse racing.

Born on February 19, 1916 in Cincinnati, Ohio, Arcaro weighed just three pounds at birth. His parents were Italian immigrants—his father, Pasquale, drove a taxi and ran an illegal liquor operation during Prohibition—and the family had humble means. The undersize Arcaro–who would grow to an adult height of 5’2”–was cut from the baseball team because he was too small and tried his hand at caddying at a local country club but struggled to carry the bags, which were often bigger than him. He dropped out of school in eighth grade to work as an exercise rider, earning $20 a month galloping horses at Latonia Track [now Turfway Park] in Florence, Kentucky, about 30 miles south of Cincinnati. In 1931, he started riding at Bainbridge Park outside Cleveland and lost his first race—as well as the next 44—before riding his first winner, a claimer named Eagle Bird, at Agua Caliente in Tijuana, Mexico eight months later. Arcaro learned his craft swiftly and was the leading apprentice at the Fairgrounds in New Orleans in 1934 before Warren Wright of Calumet Farm bought his contract for $ 6,000. Wright began pairing his new jockey with some of the farm’s best thoroughbreds, and Arcaro soon emerged as one of the sports’ top new talents. Jimmy Jones, Calumet Farm’s longtime trainer, said, “he was like an extension of me out there, the perfect extension of the trainer on the horse. And nobody had his sense of the way the race was being run.” Arcaro left Calumet in 1936 to sign with Greentree Stable. Two years later, he won the first of 17 American classic races he would win in his 30 year career.

Eddie Arcaro won his first Kentucky Derby in 1938 aboard Lawrin—which he later described as the biggest thrill of his career. In 1941, he rode Whirlaway to his second Derby victory in 2:01.4—a track record that stood for 23 years—and went on to win the Triple Crown. Arcaro would win the Kentucky Derby three more times, tying him with Bill Hartack for most wins in horse racing’s premier event. The “Master” was a strong finisher and fierce competitor who got into a lengthy jousting contest with fellow jockey Vincent Nodarse during a race at Aqueduct in 1942. Arcaro, after a series of bumpings, purposely and forcefully knocked Nodarse off his mount and into the infield. When questioned afterward by chief steward Marshall Cassidy of his intentions during the altercation, Arcaro screamed, “I was trying to kill that Cuban S.O.B.!” Following the incident, Mr. Arcaro was suspended from racing for one year. He returned to sweep the Triple Crown aboard Citation in 1948, becoming the only jockey in history to accomplish that feat twice. “Steady Eddie” won the Preakness six times and the Belmont Stakes six times, which are both records. He won the Suburban Handicap eight times, Wood Memorial nine times and the Jockey Gold Club ten times. He rode Kelso—voted Horse of the Year for five straight seasons–to victory in 12 of 14 races, breaking two track records and tying two others in the process. Arcaro later said Kelso was the finest horse had had ever ridden and that Secretariat, 1973 Triple Crown winner and Horse of the Year, was the greatest racehorse he ever saw.

“Banana Nose” won 4,799 races and rode horses that earned $30.3 million. He finished second 3,807 times and third in 3,302 races. In all, Eddie Arcaro rode in 24,092 races before his retirement in 1961 at age 45. He set an earnings record in 1948, winning $ 1,686,230–one of six seasons in which he was the sports’ leading money winner. Thoroughbred racing, along with baseball and boxing, was one of the most popular spectator sports in the pre-television era in America and Eddie Arcaro was the Sport of Kings’ biggest star. He was a driving force behind the creation of the Jockey’s Guild, the now-defunct trade association representing professional jockeys and was elected to the Racing Hall of Fame in 1958.