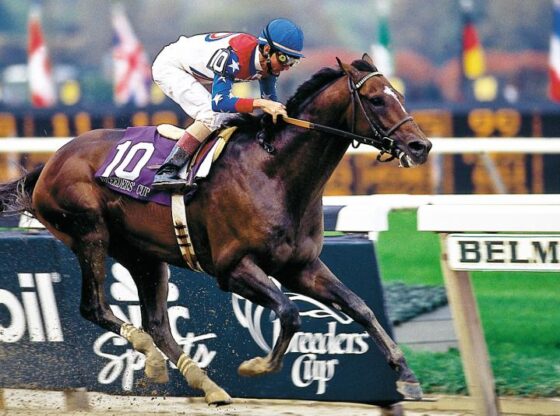 Cigar was the first American racehorse to win 16 consecutive races since Triple Crown winner Citation did so between 1948 and 1950.  He retired as the leading money winner in Thoroughbred racing history.

Voted “Racehorse of the Decade” for the 1990s, Cigar won 15 stakes races on eight different tracks.  He won 19 of 33 career starts and placed second or third in nine others.  Inducted into the National Museum of Racing and Hall of Fame in 2002 [in his first year of eligibility], he was a racehorse with immense power and unmatched consistency.  He was voted Horse of the Year in both 1995 and 1996. Cigar earned just under $ 10 million during his four-year racing career, the then-most in thoroughbred history [a mark surpassed by Curlin in 2008].  Not since the Triple Crown years of the 1970s, which featured Secretariat, Seattle Slew and Affirmed, had Thoroughbred racing seen such talent.  “Cigar was an incredible horse who left an everlasting mark on the racing world,” said Ted Nicholson, Executive Director of Kentucky Horse Park, where Cigar lived from 1999 until his death in 2014.

Foaled at Country Life Farm near Bel Air, Maryland, on this date in 1990, Cigar had impressive lineage.  His mare’s daddy was the mighty Seattle Slew, winner of the 1977 Triple Crown, and his great grandsire on his father’s side was Northern Dancer, winner of the 1964 Kentucky Derby and Preakness.  The bloodlines get richer, as Cigar is the great-great-great grandson of Bold Ruler, 1957 Horse of the Year and sire to Secretariat.  At two, Cigar was purchased by Allen Paulson, owner of the Gulfstream Aerospace Corporation.  An aviation enthusiast, Paulson did not name his horse after a tobacco product, but for a five-letter-long navigational checkpoint for airplanes.  Cigar did not race as a two-year-old, but won twice in nine starts at age three – although none of his wins came in stakes races. Following the season, he underwent arthroscopic surgery to remove bone chips in his knees.  As a three-year-old colt [the age at which horses compete in thoroughbred racing’s Triple Crown events], Cigar earned $ 89,175.

The following year, the four-year-old bay was sent to train with Bill Mott, who gave him the first half of the year off.  Cigar’s first win came in October 1994, when he raced to an eight-length victory in a one-mile event on dirt at Aqueduct.  He did not lose again for almost two years.  Cigar finished his four-year-old season with his second win, a seven-length victory in the NYRA Mile [now Cigar Mile Handicap].

Cigar’s 1995 campaign was one of the most epic in the history of the Sport of Kings.  Competing as a five-year-old, he won ten straight races.  In January, Cigar won at Gulfstream Park.  He then then beat defending champion Holy Bull in the Donn Handicap.  Cigar beat 1994 Breeder’s Cup Classic winner, Concern, in the Oaklawn Handicap before winning at Pimlico and Suffolk Downs.  He raced on the faster, harder surface of California’s Hollywood Park, then returned to Belmont Park to claim the Woodward Stakes and Jockey Club Gold Cup.  Cigar capped off a perfect ten-for-ten season with a stakes record time of 1:59.58 in the 1995 Breeder’s Cup Classic.  “I never really sense any change in his speed or the way he is traveling,” said jockey Jerry Bailey after the race.  “It’s just that I look around and the horses who were beside me are suddenly far behind.” Cigar was named 1995 Horse of the Year, earned $ 4,819,000, and won a record eight Grade 1 events in a single season.  By the end of the year, he had won a dozen races in a row.

Five months after his Breeder’s Cup win, Cigar headed to the Emirates to run in the inaugural Dubai World Cup, the world’s richest horse race with a $ 4,000,000 purse.  Great horses rarely travel to another continent, run to form, then return in good health.  Having successfully defended his title in the Donn Handicap, Cigar headed 6,000 miles to Dubai, where he held off Soul of the Matter by half a length for his 14th win in a row.  He was now the highest stakes-winning racehorse in history.  While victory in the 1995 Breeder’s Cup Classic had capped off an undefeated season, triumph in Dubai brought Cigar to an international stage.  A horse no one had heard of as a three-year-old had become Thoroughbred racing’s newest legend.

Citation is rated as the third-greatest racehorse in history [behind Secretariat and Man o’ War] by Bloodhorse magazine, the most respected journal in Thoroughbred racing.  Winner of the 1948 Triple Crown, he was the first horse in history to top $ 1 million in earnings.  Citation placed in the money in 44 of his 45 career starts, winning 32 of them.  A three-time Horse of the Year, Citation won 16 consecutive races from 1948 to 1950.

After a repeat win in the Massachusetts Handicap at Suffolk Downs, Arlington Park outside Chicago carded a special race — the Arlington Citation Challenge — for Cigar to attempt to tie Citation’s streak.  In July 1996, carrying 130 pounds, Cigar pulled away from Dramatic Gold and Unbridled’s Song to win his 16th in a row and tie the mark.  One month later, Cigar traveled to Del Mar to race in the Pacific Classic Stakes, where a record crowd of over 40,000 came out to see history.  After going out fast and running wide most of the way, Cigar was passed by Dare and Go at the finish. The streak was over.  He rebounded to win the 1996 Woodward Stakes at Belmont, which proved to be the last victory of his career.  Despite losing his two final races, Cigar finished his six-year-old season with five wins in eight starts and broke the single-season earnings record with $ 4,910,000.  He was named 1996 Horse of the Year and retired with $ 9,999,815 in career earnings, making him the leading money-winner in Thoroughbred history.

Cigar was retired to stud in 1997 but proved infertile as a stallion.  None of the 34 mares bred to him became pregnant, and he was moved to Kentucky Horse Park in 1999.  He developed severe osteoarthritis in his neck and, after medical therapies failed to relieve the pressure in his cervical spine, he underwent surgery in October 2014.  Cigar died at 24 from complications following surgery.

“Cigar remains the standard for greatness among thoroughbred racehorses of the past quarter century,” said Alex Waldrop, President and CEO of National Thoroughbred Racing following Cigar’s passing.  “He was a very, very charismatic horse,” said Jerry Bailey, who rode Cigar to his greatest triumphs.  “Everybody knows how fast he was, how dominating he was, the length of time he dominated.  He made me fall in love with horses.”

“Cigar is an unstoppable dynamo!  The crowd rises to a champion…16 in succession as Cigar assumes the crown of immortality!”
— Arlington race track announcer Michael Wrona, at 1996 Arlington Citation Challenge