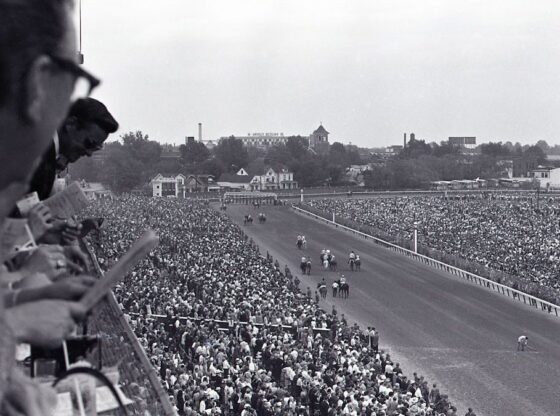 The 1968 Kentucky Derby is the most controversial in the history of thoroughbred racing’s most famous event. On the first Saturday in May 1968, 14 horses filled the starting gates at the 94th running of the Kentucky Derby, the first jewel in thoroughbred racing’s Triple Crown.  Forward Pass, winner of the Florida Derby and Blue Grass Stakes, was a 2-1 pre-race favorite.  Owned by Calumet Farm, breeders of Triple Crown winners Whirlaway and Citation and one of horse racing’s most powerful conglomerates, the bay colt was ridden by Ismael “Milo” Valenzuela.  Dancer’s Image was owned by Peter Fuller, son of Alvan T. Fuller, the 50th Governor of Massachusetts who opted not to pardon Sacco and Vanzetti before the Italian immigrants were controversially executed in 1927.  Sired by 1953 Triple Crown winner Native Dancer, the gray horse was ridden by Bobby Ussery [who had won the Derby a year earlier aboard Proud Clarion].  Winner of four stakes races as a two-year-old as well as the Wood Memorial two weeks earlier, Dancer’s Image was the second choice among betters, going off at 7-2. After winning at Aqueduct in April, Dancer’s Image spent long hours standing in a tub of ice water at Churchill Downs.  Plagued by sore ankles and having raced more than any horse in the field prior to the Kentucky Derby, Dancer’s Image was given phenylbutzone, a non-steroidal drug commonly used to relieve joint inflammation.  At the time, it was illegal for “Bute” to be in a horse’s system on race day at Churchill Downs.  Administered by the track veterinarian on Monday of race week, the horse’s handlers believed the medication would clear his system within 72 hours – well before Derby day. The Kentucky Derby has been called the “most exciting two minutes in sports.”  In the 1968 running, Dancer’s Image broke from the twelfth stall – inside just two horses — and trailed by 15 lengths early in the race.  He gained ground on the far turn, then dropped to the inside at the top of the stretch.  Going to the whip, Ussery coaxed his horse past Forward Pass just inside the eighth pole.  Dancer’s Image held on to win by one-and-a-half lengths.  Forward Pass, who had started in the tenth stall, was second, with Francie’s Hat third.  Iron Ruler, who had gone off in the pole position and was favored third, finished a disappointing 12th.  In the Winner’s Circle after the race, Dancer’s Image was adorned with the iconic wreath of roses that goes to the Derby winner.  Peter Fuller and his family had photos taken with the Gold Cup Trophy, then attended a victory party after the race.

On the night of the race, in a mobile lab on the Churchill Downs grounds, an assistant racing chemist for the Commonwealth of Kentucky ran a mandatory post-race urinalysis.  Using a $ 9.50 test kit, traces of Bute were discovered in Dancer’s Image.  Kentucky’s head racing chemist, Kenny Smith, retested the sample several times at his lab the following day.  The results were the same.  On Tuesday, while Bobby Ussery played golf in New York and Milo Valenzuela, the jockey who rode Forward Pass to a second-place finish, was on a golf course in Louisville, the president of Churchill Downs announced that because of the test, Dancer’s Image had been dropped to last place and the Derby victory was given to Forward Pass.

Controversy filled the sporting news of every media outlet in North America.  Sports Illustrated called it “the sports story of the year.”  Believing someone else may have given his colt another dose of Bute, Peter Fuller filed an appeal for the disqualification.  The Kentucky State Racing Commission ordered the first-place money to Forward Pass.  In December 1970, a Kentucky court reversed the decision on appeal, awarding the first-place money to Dancer’s Image.  That decision was overturned on appeal in April 1972 by Kentucky’s highest court, with Forward Pass being declared the winner. Fuller believes he was set up.  Fuller speculated that the Kentucky racing aristocracy was offended when he donated $62,000 in April 1968 to Coretta Scott King.  The money was the winner’s share from the Governor’s Gold Cup, which Dancer’s Image had won two days before Mrs. King’s husband – the Reverend Dr. Martin Luther King, Jr. – was assassinated.  A thoroughbred racing outsider and liberal from Boston, Fuller believed that he was persona non grata in the Bluegrass Sate, and that the influential Calumet Farm had taken advantage of lackadaisical security at the stables at Churchill Downs, allowing corrupt intruders to dope his horse.  During the appeals process, veterinarian Dr. Alex Harthill, the “Derby Doctor,” testified he had given Dancer’s Image four grams of Bute 152 hours before the race –twice the amount of time needed for it to clear – yet the horse tested positive.  Fuller maintains that Harthill’s ties to Calumet Farm are to blame.

In 1968, Forward Pass was a good horse in weak year for three-year-olds.  After winning the first two legs of the Triple Crown, he lost to Stage Door Johnny – who was later named 1968 Horse of the Year — at the Belmont Stakes.  Forward Pass won 10 of 23 career starts and finished in the money six other times.  He died in December 1980, at 15.

For more than 48 hours in 1968, Bobby Ussery had the distinction of being the first jockey in 66 years to ride back-to-back Kentucky Derby winners.  “I know they took the Derby away from Dancer’s Image,” the United States Racing Hall-of-Famer said two decades later, “but we were first across the finish line, they paid off the people that bet on him, and that’s good enough for me.”  In March 1974, Bute — which has the same effect on horses as aspirin does on humans – was legalized by the Kentucky Racing Commission.  “It was legal before Dancer’s Image,” said Ussery.  “Venetian Way had it when he won the Derby in 1960.  I was second on Bally Ache that year.”  By 1986, Bute was so common that 13 of 16 horses in the Kentucky Derby field were running while on the medication. The official results of the 1968 Kentucky Derby show the winner to be Forward Pass, followed by Francie’s Hat and TV Commercial.  As of 2008, the Churchill Downs media guide for the Kentucky Derby still included the official chart showing Dancer’s Image as the winner.  The New York Times called the 1968 Run for the Roses the “most controversial Kentucky Derby ever.”  It remains the only time in the event’s 142-year history that a winner was disqualified.

On this date in 1968, Dancer’s Image was the first horse to cross the finish line in the
94th running of the Kentucky Derby.