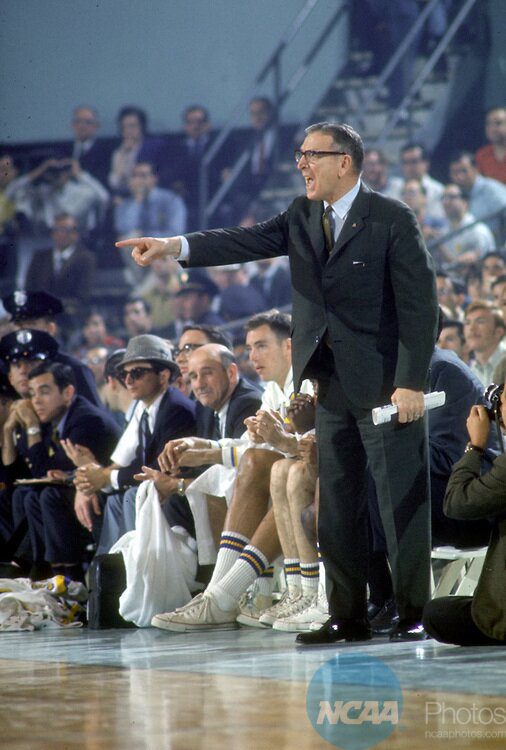 The NCAA Division I Men’s Basketball Tournament is one of the most famous and exciting sports events of the year. Created in 1939–one year after the National Invitation Tournament and two years after James Naismith founded the NAIA championship, which remains the oldest tournament in college basketball—the tournament was the idea of Ohio State basketball coach Harold Olsen.  New York City area teams dominated college basketball in the 1930s, and the New York Telegram, along with the Metropolitan Basketball Writers Association [MBWA], started the NIT—to be played in Madison Square Garden [Daily Dose, 12/15/15]—and anointed the winners as national champions.  Skeptical of eastern influences and the high profile presence of gamblers at Madison Square Garden games, Olsen teamed with the National Association of Basketball Coaches and the NCAA to create a nationwide tournament.  The inaugural event included eight teams—four playing in the east and four in the west—with the winners of each meeting in the middle of the country for the title.  On March 27, 1939, Olsen’s Buckeyes played the Oregon Ducks in Evanston, Illinois, in the first NCAA championship game in history.  Oregon prevailed, 46-33, for the one and only basketball title in school history. The “Big Dance” is a single-elimination Division I [highest level of athletics sanctioned by the NCAA] tournament that follows regular season and conference tournament play each spring.  The tournament format has changed several times over the years. The event consisted of an eight-team field from 1939 to 1950.  The size of the field doubled in 1951 and remained that way until 1975, when it doubled again to include 32 teams.  Beginning in 1980, 48 teams were invited to participate, and in 1985 the field expanded to 64.  Since 2011, 68 teams have been invited to the NCAA tourney, with four “play-in” games taking place before all remaining teams compete in the first round.  Automatic bids are awarded to 32 conference champions and 36 teams receive “at large” berths chosen by the NCAA Selection Committee, a ten-person panel of Division I athletic directors and conference commissioners.  At-large berths are awarded using a system that takes into account a team’s won-loss record as well as strength of schedule.  Prior to 1975, only one team per conference could be in the tournament.  In 2015, four leagues each placed seven teams in the Big Dance. Teams and brackets are announced on “Selection Sunday,” the Sunday preceding the first four play-in games.  Teams are divided into four regions and organized into a single-elimination bracket.  Each team is seeded, or ranked, within its region from one to 16, and the Selection Committee strives to make the overall quality of each region equal.  Unlike the NIT, the NCAA tournament prohibits teams from playing tournament games on their home courts.  The event takes place over three weekends at pre-selected neutral sites across the U.S.  Beginning with a field of 64, the tournament goes to a Sweet 16, and, for the last weekend of the tourney, a Final Four [Daily Dose, 4/13/16].  The Final Four is usually played during the first weekend of April.  These teams—the winners of each region—compete in one centralized location for the national championship. Played mostly during March, the NCAA tournament is commonly known as “March Madness,” a term originated in 1939 during the Illinois state high school basketball tournament.  Harry Porter, an official with the IHSA, coined the phrase, which now shares trademarks for the Illinois high school tournament and NCAA collegiate championships.  In 1982, Brent Musburger, formerly a reporter for the Chicago Daily News, used March Madness while covering the NCAA tournament for CBS Sports, and the name stuck.  The tournament has brought about its own language.  A Cinderella team is one that achieves far greater success—embodying the notion of unjust oppression and triumphant reward associated with the folk tale—than would reasonably have been expected.  Teams On The Bubble are awaiting one of the final spots for an at-large bid, while Bracketology refers to the process of predicting the field of participants for the tournament.

After the Super Bowl, the NCAA Men’s Division I tournament is the most popular sporting event amongst gamblers.  USA Today estimates that over $ 9.2 billion was wagered on the event in 2016—only $ 262 million of it legally—which is more than the entire GDP of Iceland.  Televised since 1969, all games are now available for viewing nationwide and internationally, while opening round games on Thursday and Friday have nearly become American holidays. With 11 national titles, UCLA has the record for the most men’s Division I championships.  John Wooden [Daily Dose, 10/14/15] coached the Bruins to ten of them, twice as many as Duke’s Mike Krzyzewski, who is second on the list.  The University of Kentucky is next with eight national titles, followed by Indiana, North Carolina, and Duke, with five each.  Kansas City Municipal Auditorium has hosted the most Final Fours [8], followed by Madison Square Garden, with seven.  There have been nine occasions when the defending champion did not make the tournament, including North Carolina in 2010, Kentucky in 2013 and UConn in 2015.  Seven times an undefeated team did not get a bid; most recently Alcorn State, which finished 27-0 in 1979.  In 2008, all top seeds [Kansas, North Carolina, UCLA, Memphis] made the Final Four, the only time in history that has happened.  Villanova, an eighth-seed in 1985, is the lowest-seeded team to win the tournament, and Richmond is the only team to win first-round games ranked # 15, 14, 13 and 12.  The last undefeated team to win the NCAA tournament was Indiana [Daily Dose, 3/31/16] in 1976.  Since then, the last five unbeatens have gone down during March Madness; most recently Kentucky, who lost to Wisconsin in the 2015 national semifinal game.  Seven title games have gone to overtime.  The longest came in 1957, when North Carolina needed three extra periods to beat Wilt Chamberlain and Kansas, 54-53. The 1979 NCAA national championship is the most-watched game in American basketball history, when Magic Johnson [Daily Dose, 8/14/15] led Michigan State to the title over Larry Bird’s previously unbeaten Indiana State Sycamores.  Johnson was named the tournament’s Most Outstanding Player.  The MOP almost always goes to a member of the championship team, especially since the third-place game was eliminated after 1981.  UCLA’s Lew Alcindor has the most MOP awards [3], which is particularly impressive given that freshman were not eligible to play in the tournament at that time.  Bill Walton [Daily Dose, 11/4116] has twice been named MOP of the tournament, and other past winners include Bill Bradley [Daily Dose, 7/28/15], Jerry West, Akeem Olajuwon and Bill Russell. Selection Sunday is scheduled for March 12, 2017.  First round games begin later that week, culminating with the Final Four April 1 and 3 at University of Phoenix Stadium in Glendale, Arizona.