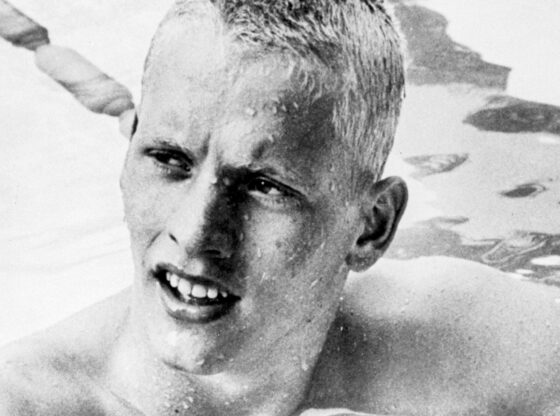 Before Mark Spitz and Michael Phelps there was Don Schollander.

Donald Arthur Schollander was born in Charlotte, North Carolina on April 30, 1946. His father played halfback at North Dakota State and his mother was an outstanding swimmer who appeared in several Tarzan movies with former Olympic swimming legend Johnny Weissmuller. Schollander was taught to swim by his uncle, Newt Perry, who ran a highly regarded swim school in Florida, before the family moved to Lake Oswego, Oregon—a suburb of Portland—when Don was seven. At 13, he held the national age-group record in both the 50 meter and 100 yard backstroke. Schollander’s first love was football—his father, uncle and brother were all-state players in high school-and he was torn over whether to swim or play football upon entering Lake Oswego High School. He chose swimming and, as a freshman, helped lead the Lakers to the Oregon state title in 1960. Following his freshman year, he moved to California to train at the famed Santa Clara Swim Club with legendary coach George Haines, who produced 53 Olympic swimmers-44 who became gold medal winners—including Mark Spitz [Daily Dose, September 4]. In August of 1962, the 16-year-old Schollander burst onto the national scene with a record-setting performance in the 200 meter freestyle at the AAU Outdoor Championships, one of 11 AAU titles he would win between 1962 and 1967. Schollander’s starts, turns and stroke technique were flawless and, at the encouragement of his football-minded father, he incorporated weight training into his workout regimin, which was uncommon for swimmers at that time. Schollander became the first swimmer in history to break two minutes in the 200 meter freestyle, going 1:58:8 at the Los Angeles Invitational in July of 1963.

Don Schollander was 18 years old when he qualified for the 1964 U.S. Olympic Team in the 100 and 400 meter freestyle. The 5’11”, 174 pounder’s favorite distance was 200 meters—he was the reigning world record holder at 1:57:6, but that race was not included in the program as an individual event at the 1964 Summer Games in Tokyo. The fresh-faced teenager competed in his first event—the 100 meter free—on October 12 and won a gold medal while setting a new Olympic record. Two days later, he anchored the 4 x 100 relay team’s world record performance in route to a second gold. The following day, Schollander shattered the world record in the 400 meter freestyle to earn another gold medal and capped off the most prolific performance in swimming history when he anchored the 4 x 200 freestyle relay team to a gold medal while demolishing the world record. Don Schollander became the first swimmer in history, and only American besides Jesse Owens, to win four gold medals in a single Olympic Games and did so only four months out of high school. His performance landed him on the cover of Life magazine and he was named “Athlete of the Year” by UPI and ABC’s Wide World of Sports. Mr. Schollander earned the Sullivan Award in 1964 as the most outstanding amateur athlete in the United States and was, at that time, the youngest to ever receive that honor. The American team, dubbed the “Splash Pack”, took 13 of 18 gold medals in Tokyo and Don Schollander led the way. He was already considered swimming royalty when he enrolled at Yale in January of 1965 to swim for Phil Moriarty, the famed coach who had compiled a dual meet record of 195-25 during his four decades in New Haven. Schollander majored in economics, was a three-time captain of the Eli’s swim team and won three individual NCAA titles during his time at Yale. In 1967, he won three gold medals (200 free and two relays) at the Pan Am Games and was 22 years old at the time of the 1968 Olympic Trials. Schollander failed to qualify in the 100 or 400 freestyle but did earn a spot in the 200, which had been added to the Olympic swim program for the first time since the 1900 Summer Games in Paris. Mr. Schollander earned a silver medal in the 200 free and teamed with Mark Spitz in the 4 x 200 freestyle relay to win a gold medal—the fifth and final of his career—before retiring following the closing ceremonies in Mexico City.

Don Schollander is one of the best swimmers in American history. He was the first to break two minutes for 200 meters and broke the world record at that distance 11 times in his career. Schollander was inducted into the International Swimming Hall of Fame as an Honor Swimmer in 1965 and was enshrined to the U.S. Olympic Hall of Fame in 1983. He was named Athlete of the Year by the Associated Press in 1964, becoming the first swimmer to win that award while beating out second-place finisher, John Unitas, by a wide margin. Schollander posted three world records in the 400 meter freestyle and shared in eight world-record freestyle relays. His Olympic medals are on display at a Bank of America branch in Lake Oswego, Oregon.

On this date in 1968, Don Schollander retired from competitive swimming.