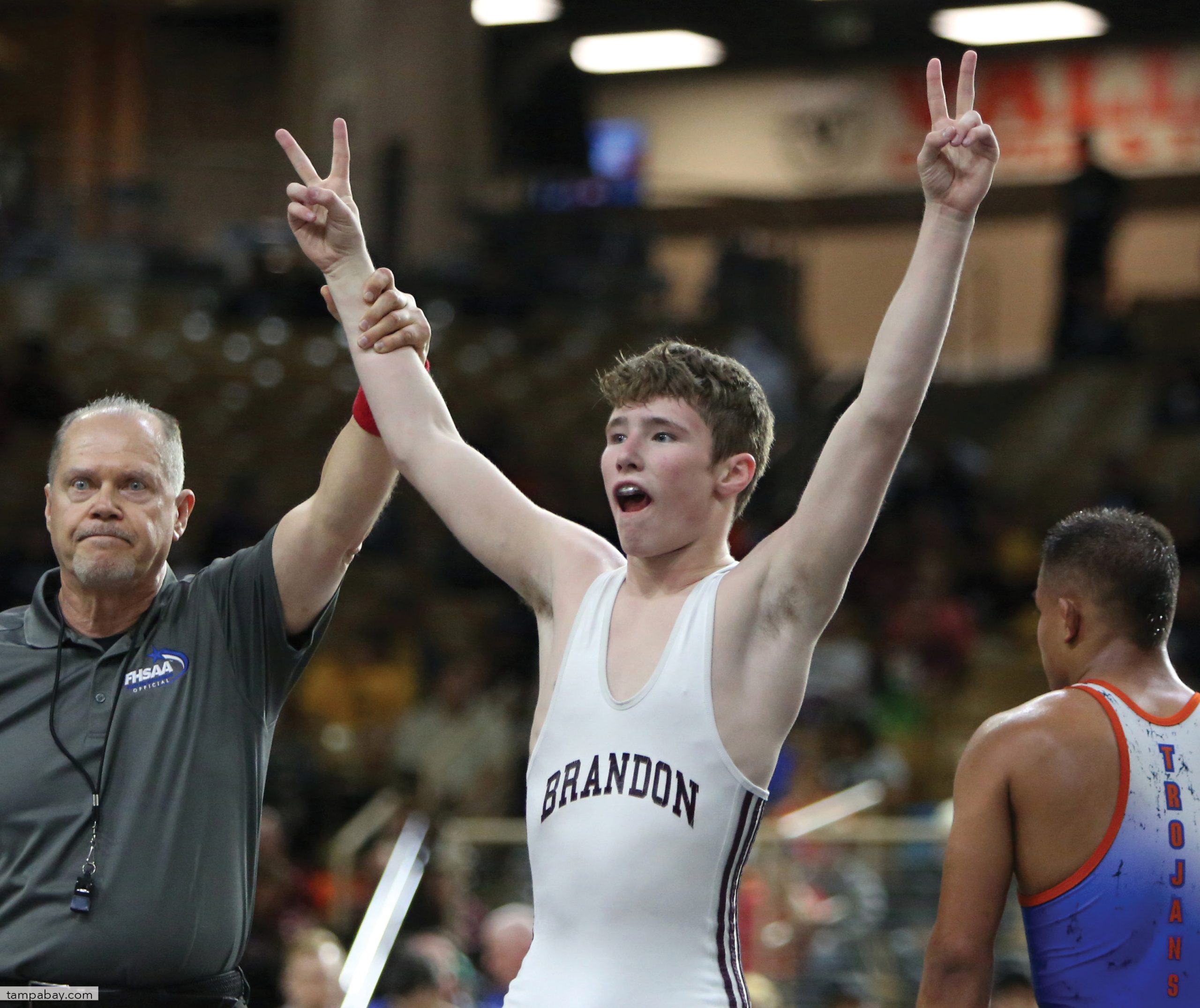 Today we discuss the most impressive winning streak in the history of high school athletics.

Brandon High School is a national Blue Ribbon School located in Brandon, Florida,  about 20 minutes east of Tampa.  Founded in 1914 and with an enrollment of nearly 2,000 students, it is part of the Hillsborough County Public School District.  From 1974 to 2008, Brandon’s varsity wrestling team won 459 straight dual matches—and 468 overall matches—both of which are the longest streaks for any sport in American high school history.  When the streak started, Richard Nixon was winding down his presidency, Happy Days was the most popular show on television, and Larry Csonka had just been named MVP after leading the Miami Dolphins to victory over the Minnesota Vikings in Super Bowl VIII.  When it ended, George W. Bush was in his second term in the White House, Fonzie’s leather jacket was on display in the Smithsonian, and the New England Patriots were entering the playoffs having just completed a perfect regular season.  During that 34-year span, Brandon won 18 team titles and 66 Eagle wrestlers had won individual titles, both Florida state records.

“The Streak” began January 29, 1974, when Brandon defeated Tampa’s Robinson High School—alma mater of Hulk Hogan—32 to 17.  The Eagles were coached by Jim Graves, who had taken over the program in 1971.  Beginning with the win over Robinson, Graves would lead Brandon to seven consecutive undefeated seasons and one state title.  In 1980, he was succeeded by Russ Cozart, who is still there.  In January 2008—more than three decades after taking over the program—Cozart’s grapplers hosted Homestead South Dade at the sixth annual Jim Graves “Beat the Streak” Wrestling Tournament.  Brandon came into the contest as the top-ranked team in the state, while South Dade was third.  Over 2,000 fans packed the gymnasium—known as the Eagles Nest—to see South Dade take five of the first seven bouts.  With two matches left, Brandon pulled to within six points, but could not pull it off, losing 28-32.  The Streak was over.

There were several key moments that kept the streak—which lasted 12,396 days–alive.  In 1980, the Eagles were losing to East Bay late in the match when Tony Gustafson saved the day, scoring a five-point superior decision to led the Eagles to a 28-27 victory.  Eric Grant had lost to Chamberlain High School’s Tim Timchuck in each of their previous four meetings when they squared off in 1982.  Coach Cozart said the match looked “hopeless on paper.”  After executing a perfect reversal—worth two points in prep wrestling—to win the match 7-6 Brandon went on to defeat Chamberlain, 29-27.  “If not for that move,” said Cozart after the contest, “Chamberlain wins the match.”  Brandon held a narrow lead over Chamberlain in their hotly-contested dual meet in 1989 when five-foot-six-inch Steve Smith took to the mat to face the Chiefs’ 6’2”  hulking heavyweight in the event’s final bout.  Smith, who described his opponent as being “built like a football player,” took the taller man down with a headlock to preserve a 31-28 Eagles victory.

Notable milestones during Brandon High’s 34-year run include February 6, 1988, when they notched win number 176 against Hillsborough, breaking the national high school wrestling mark for consecutive wins, formerly held by Bismarck [ND] High School.  On January 18, 1997, Brandon defeated archrival Chamberlain for win 293, breaking the national mark for consecutive victories by a high school team in any sport.  The record was held by Amherst [NY] Sweet Home High School’s volleyball team, which won 292 straight matches from 1978 to 1987.  Win number 300 came in a 70-3 rout of Plant High in December 1997.  On January 8, 2005, Brandon downed Chamberlain, 53-12, in the finals of the Jim Graves tournament—with Coach Graves on hand–to collect consecutive win 400.

Brandon has produced a long line of accomplished wrestlers.  David Craig won four consecutive state titles from 2003 to 2006.  During that span, he wrestled in 184 matches, winning them all.  Cesar Grajales Sr. was a member of the 1982 team that helped Coach Cozart capture his first state title.  Grajales had two sons wrestle at Brandon.  The oldest, Cesar Jr., won four state titles and only lost two matches in his career.  His younger son, Eric, won state titles at 103, 112, and 130 pounds in his first three seasons.  As a senior, Eric Grajales captured his fourth state title while competing at 135 pounds and capped off his four-year varsity career with a record of 218-0.  Both Grajales brothers went on to wrestle collegiately.  Cesar Jr. competed for Penn from 2007 to 2010, while Eric—who was named Florida’s top prep wrestler—became an All-American at Michigan in the 149 pound division.

Brandon High is an ordinary school, attended by ordinary people, who accomplish extraordinary things.  At the heart of the program is Russ Cozart, who founded and runs the Brandon Wrestling Club, a youth program that serves as the school’s feeder system.  Under Cozart, BWC has won over 150 individual titles in the past two decades.  In addition, the school has superb facilities and schedules rigorous non-conference competition.  As with all sports, the key to success lies in coaching, and Russ Cozart is without peer.  His workouts—run with precise execution and attention to detail—are legendary, and the results speak for themselves.

None of the Brandon wrestlers on the 2008 team were born when The Streak began.  In 2009—one year after the longest winning streak in high school sports history ended—Brandon beat South Dade in a rematch, 53-13.  It was one of the worst defeats in South Dade history.

In the spring of 2008, former Brandon High student Mark Consuelos and his wife, Kelly Ripa, produced “The Streak,” a two-hour documentary that tells the story of Russ Cozart and the 2007-08 BHS wrestling team.

On this date in 2008, South Dade High of Homestead beat Brandon in a dual wrestling meet, 32-28, to end the longest winning streak in high school sports history.