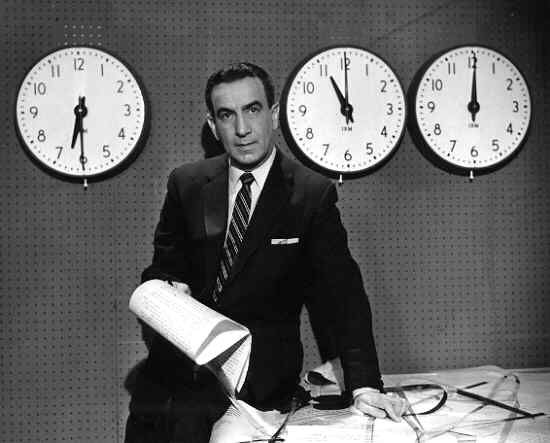 John Facenda did more to popularize professional football in America than any journalist in history.

Mr. Facenda was the king of Philadelphia television news for over two decades.  He was the original Walter Cronkite, delivering TV news to the people of Philly before the term “anchorman” had been invented.  He was the voice of Philadelphia.  Facenda was a “monument to this city,” said former Mayor Wilson Goode.  “I grew up feeling that the only newsperson in Philadelphia was John Facenda.  I trusted him.”  Although wildly popular regionally, Facenda achieved national fame as narrator for NFL Films, where he became known as the “Voice of God.”

Born August 8, 1913, in Portsmouth, Virginia, John Thomas Ralph Augustine James Facenda was the seventh of 13 children.  His father was a civil engineer who came to Philadelphia in 1922 to work on the Benjamin Franklin Bridge. Four years later—on the 150th anniversary of the signing of the Declaration of Independence—he moved his family to the “City of Brotherly Love.”  After graduating from Roman Catholic High School—alma mater of future NFL hall of famer Marvin Harrison—in 1931, Facenda enrolled at Villanova but had to drop out because he couldn’t afford it during the Great Depression.  He found work with the now-defunct Philadelphia Public Ledger newspaper, which also owned a radio station.  When the announcer for the “Scholastic Sports Review” radio program took ill, Facenda replaced him.  Soon after, the station hired him as an announcer.

In 1935, Facenda started working for WIP Radio, where he would remain for the next 17 years.  To calm his nerves while broadcasting, he pretended he was talking only to his mother, going so far as to place a photo of her in the announcer’s booth.  Facenda began his work in television in 1948, anchoring his first news telecast for WCAU-TV, Philadelphia’s CBS affiliate.  He started working full-time in television after leaving WIP in 1952, ending his newscasts with his signature phrase, “Have a nice night tonight and a good day tomorrow.  Goodnight, all.”  Facenda’s original telecasts were just five minutes long, but he became so popular as Philly’s top-rated newsman [beating the combined ratings of the two other network affiliates] that his broadcasts were eventually expanded to 30 minutes, pioneering the modern half-hour format of news, weather and sports.  Mr. Facenda became a Philadelphia icon as both the face and voice of the city’s news.

Facenda became narrator for NFL Films by accident.  One night in 1965, he and a friend dropped into San Marco, a favorite nightspot for Philadelphia newsmen.  To promote business, the tavern owner was showing pro football game action assembled by NFL Films, an upstart operation which had recently gained a contract as producer for the NFL.  Fascinated by the slow motion sequences, Facenda started to rhapsodize about how beautiful it was.  Ed Sabol [Daily Dose, 9/11/15], the founder of NFL Films, was in the bar and approached Facenda, asking, “If I give you a script, could you repeat what you just did?”  Facenda said he would try.  It marked the beginning of one of the most important relationships in sports history, as Facenda became the voice of NFL Films for two decades, contributing significantly to the rise in popularity of pro football in America.

John Facenda was the first and he was the best.  His rich, dramatic voice was the perfect complement to the tight spiral of the football dropping through snow into the waiting hands of a receiver, or the slow motion violence of the line play.  The Voice of God had a dulcet baritone that Bob Costas called, “One of the most remarkable instruments in the history of broadcasting.”  Mr. Facenda marked his NFL Films scripts with musical notations for his guidance: lento [slow down], presto [speed up], glissando [glide through it].  Tom Fox wrote in the Philadelphia Inquirer that Facenda had the “majestic bearing of a king, the diction of an elocution teacher and the soul of a poet.”  His work was impeccable and his speaking style remains the sound most closely linked with NFL Films.  “Lombardi.  A certain magic still lingers in the name.  It speaks of duels in the snow and cold November mud.”   Facenda’s style is best embodied by “The Autumn Wind,” a football poem written by Ed Sabol’s son Steve in 1974 personifying fall weather.

The Autumn Wind is a pirate

Blustering in from sea

With a rollicking song he sweeps along

His face is weatherbeaten

He wears a hooded sash

With a silver hat about his head

And a bristling black moustache

He growls as he storms the country

A villain big and bold

And the trees all shake and quiver and quake

As he robs them of their gold

The Autumn wind is a Raider

He’ll knock you ‘round and upside down

And laugh when he’s conquered and won.

“The Autumn Wind” and its accompanying theme music have become an anthem of the Oakland Raiders—better known at the “Battle Hymn of the Raider Nation.”

John Facenda left Philadelphia newscasting in March 1973 but remained with NFL Films until his death in 1984.  Mr. Facenda was named 1971 Person of the Year by the Broadcast Pioneers of Philadelphia and was inducted posthumously into that organization’s Hall of Fame in 1992.  In September 1984, Facenda was presented with the Governor’s Award for Lifetime Achievement by the Philadelphia chapter of the National Academy of Television Arts and Sciences.

On this date in 1951, John Facenda anchored a 15-minute newscast for Philadelphia’s WCAU-TV.